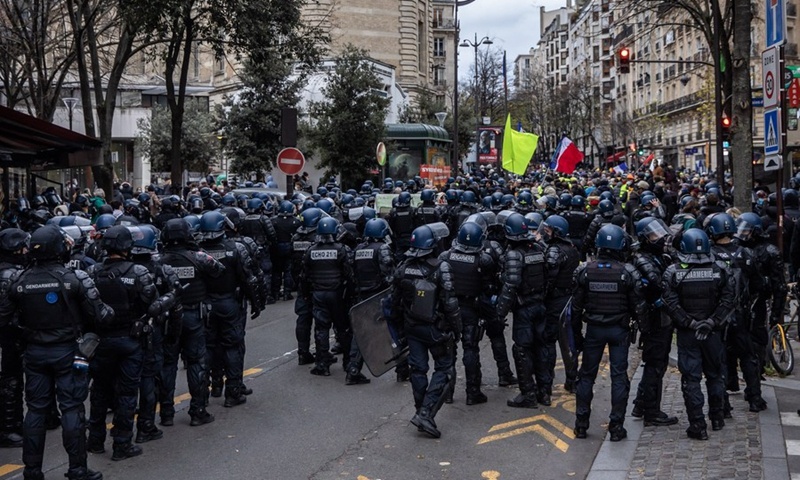 Gendarmes guard during a demonstration in Paris, France, Dec. 5, 2020. Paris police made 22 arrests on Saturday after violence flared up in a demonstration against police brutality and a controversial bill. (Photo: Xinhua)

A total of 142 protesters were arrested on Saturday in Paris after a new day of protest against a controversial security bill that would restrict filming of the police, French Interior Minister Gerald Darmanin said.

In a Twitter message, Darmanin said the 142 people have been arrested in the capital's demonstration "thanks to our police officers and gendarmes' determined and courageous action against the troublemakers who came in large number...Several hundred thugs had come to commit violence."

Police found in their bags materials that could be used as projectiles to cause damage to public or private properties, including adjustable wrench and screwdriver, French media reported.

French police fired tear gas and used water cannon in response to some protesters who allegedly pelted them with projectiles. Violence in Paris was less severe than a week ago when some 400 to 500 protesters smashed up shop fronts, torched cars and burned barricades.

Demonstrations were also held in other French cities such as Montpellier, Strasbourg, Lille, Toulouse and Marseille, French media reported.

Saturday's protests were the third consecutive weekend of street action across French cities after the government has introduced a controversial draft law that restricts publishing police images.

Critics said the bill, which has been adopted by the lower house of parliament, would restrain freedom of expression and impede media reporting on possible police brutality, while the French government justified it as a way to protect policemen from threats and violence.

Under street pressure, President Emmanuel Macron's ruling LREM party announced last week said it would rewrite the controversial article 24, which is about filming the police.

The announcement, however, fell short of the expectations of protesters and rights groups, who are demanding that the law be completely withdrawn, according to French media.