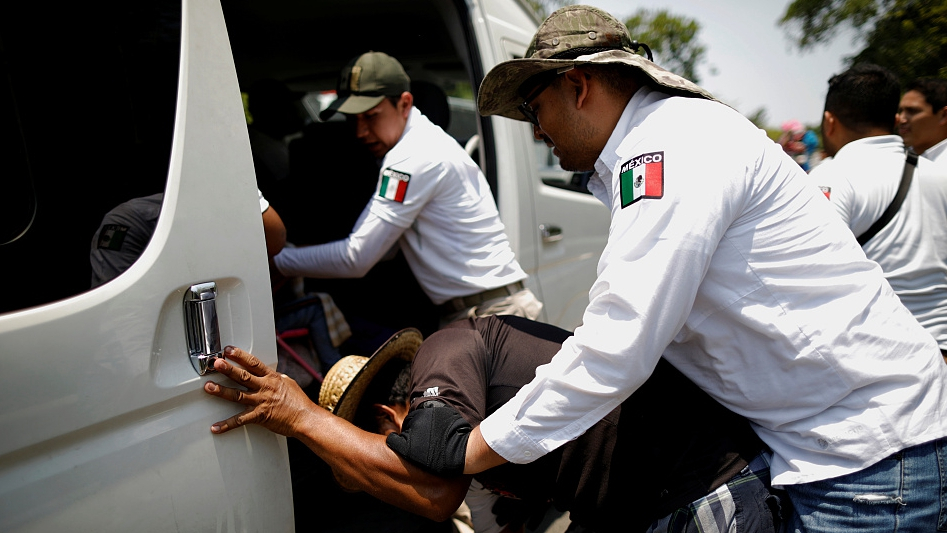 A Central American migrant is detained by Mexican immigration officers during a raid on their journey towards the US in Pijijiapan, Mexico, April 22, 2019. (Photo: VCG)

Mexico police have rescued 150 Central and South American migrants trapped in a trailer in Mexico's eastern Veracruz state while smuggling to the US border, the authorities said on Tuesday.

Police heard screams coming from inside the vehicle after they stopped the trailer for a traffic violation, the Ministry of Security and Citizen Protection said in a statement.

Of the 150 migrants, 73 are from Guatemala, 45 from Honduras, 26 from El Salvador and six from Ecuador. The group included 66 minors. According to the reports, they were trapped in the tractor for days without water or food.

Migrant rescue work is a regular activity conducted by Mexico's federal police at the U.S.-Mexico border, as the Latin American country agreed to a 45-day deal with its powerful neighbor to help slash down asylum seekers influx.

By effectively shrinking the number of undocumented migrants crossing over the border, Mexico can be spared the sanctions the US had threatened to impose.

After Mexico stepped up security at its southern border in June, there was a reduction of 36 percent in the migrants influx.

Health and hygiene continue to be an issue for concern.

Smugglers do not care about the migrants hidden in the trailers that carry them across entire Mexico before reaching the border.

"They (migrants) can asphyxiate," said Ebrard, "and that's why the highest priority has been to fight these people (smugglers)."