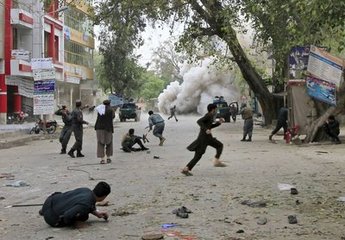 Afghan security forces counter-offensive left at least 18 militants and two policemen dead in the country's eastern province of Ghazni, a local official said Saturday.The incident occurred late on Friday, when Taliban militants launched a wide offensive on the security checkpoints in Giro district of the province. The government security forces launched a counter attack, leaving 18 militants dead and 27 others wounded, Aref Noori, provincial government spokesman, told Xinhua.Among those militants killed in the fighting were two local leaders named Jawhari and Zaker, the spokesman added.Two policemen were also killed and 11 police personnel were injured in the skirmish.Taliban militants, who are fighting government forces in many parts of the province, have not commented on the report.Violence has been on the rise as Afghan security forces struggle against a surge in attacks by anti-government fighters.