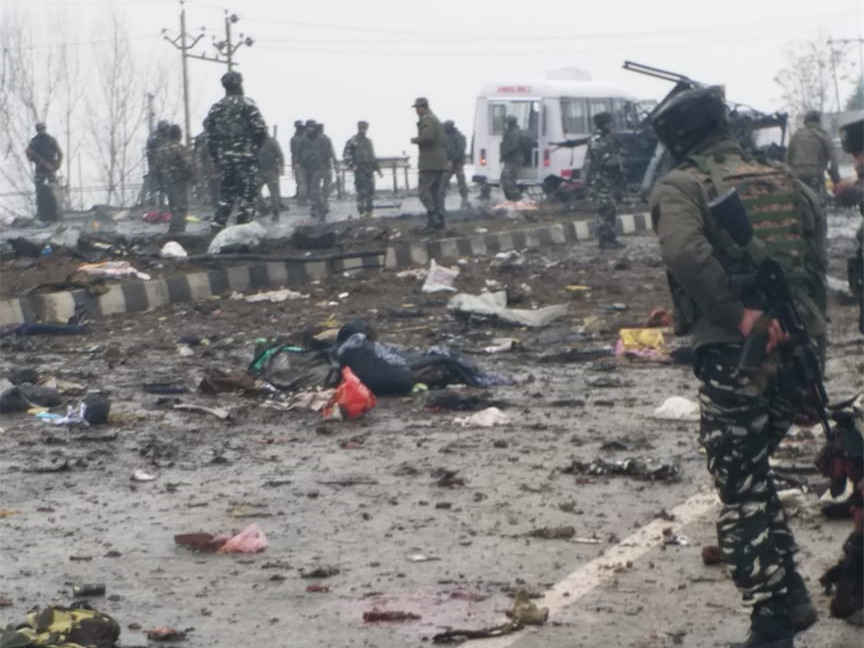 The attack was carried out on national highway near Lethpora village in Pulwama district, about 27 km south of Srinagar city, the summer capital of Indian-controlled Kashmir.

"The vehicle has ripped apart the bus in the convoy. At this stage we are not able to give the number of casualties but would issue a statement once the things get clear," Sanjay Sharma, a CRPF spokesman in Srinagar, told Xinhua.

India's junior foreign minister V K Singh lashed out at the militants for the deadly attack.

"As a soldier and a citizen of India, my blood boils at the spineless and cowardly attacks. Eighteen brave hearts from CRPF India laid down their lives in Pulwama. I salute their selfless sacrifice and promise that every drop of our soldier's blood will be avenged," Singh wrote on Twitter.

The Jaish-e-Mohammad (JeM) militant group has claimed responsibility for the attack, saying a fidayeen (suicide bomber) carried out a car bomb blast to target the convoy.

"A JeM spokesperson Muhammad Hassan in a statement said many forces vehicles were destroyed in the attack," local newsgathering agency GNS said.

The blast damaged several vehicles in the 50-vehicle convoy.

Photographs from the site showed blood spilled on road, body parts and baggage strewn on the road.

Eyewitnesses said smoke was billowing from the mangled vehicle and people ran for cover following the blast.

Immediately after the attack contingents of police and paramilitary reached to the spot to take wounded to the hospital.

"The police have taken up the investigation and wounded were shifted to hospital. Post-blast analysis is being done at the spot," Inspector General of CRPF Zulfiqar Hassan told the media. "At this stage we can't confirm the exact number of casualties."

Officials said the death toll was likely to rise.

Militant groups opposing New Delhi's rule are engaged in a guerrilla war with Indian troops in the region since 1989. Gunfight between the two sides takes place intermittently.

Kashmir, the Himalayan region divided between India and Pakistan, is claimed by both in full. Since their independence from Britain, the two countries have fought three wars, two exclusively over Kashmir.