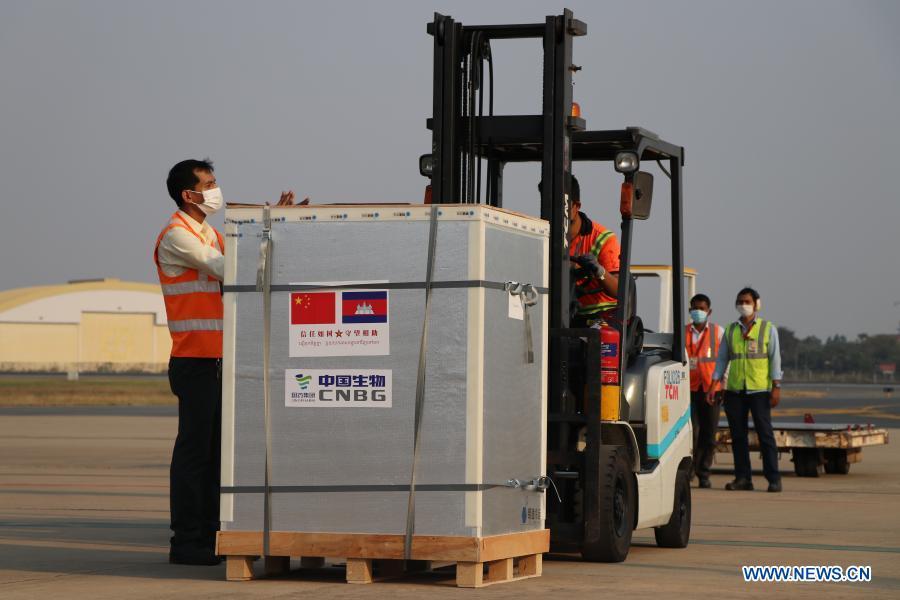 Cambodian Prime Minister Samdech Techo Hun Sen was among hundreds of people who were awaiting the arrival of the vaccines at the Phnom Penh International Airport.

"I'm delighted to hear about the arrival of the COVID-19 vaccines donated by China to Cambodia," Om Sophorn, a 32-year-old taxi driver in Phnom Penh, told Xinhua. "It brings hope for my life and I hope our economy will be vibrant again."

He expressed his gratitude to the government and people of China for providing the vaccines to the Southeast Asian nation.

"This clearly demonstrates that China always helps Cambodia in difficult times and through this emergency aid, I believe that the relations between the two countries will be rooted deeper in the hearts of the peoples of the two countries," he said.

Chim Sovankiri, a 31-year-old rickshaw driver in the city, said he was totally confident in the efficacy of the Chinese vaccines, and he hoped that he would receive it in the near future.

"I thank China for helping us in this difficult time, and we will remember this generous support," he said.

In an interview with Xinhua, Cambodian Deputy Prime Minister Hor Namhong also expressed his gratitude to China for providing the Sinopharm vaccine, saying that it was the first vaccine that Cambodia had received so far.

Pov Sok, an advisor to the Cambodian prime minister, said the vaccines' arrival was another historic milestone in Cambodia-China relations.

"This is a new testament to the unbreakable relations and solidarity between our two countries," he told Xinhua. "Through this emergency aid, I strongly believe that the Sino-Cambodian ties will reach a new high."

Chinese Ambassador to Cambodia Wang Wentian said Cambodia was one of the first countries to receive vaccine assistance from China and that the donation has clearly reflected China's unwavering commitment to promoting COVID-19 vaccines as global public goods.

"It is hoped that these vaccines can play a positive role in helping Cambodia fight the COVID-19 pandemic," he said during the handover ceremony of the vaccines held at the airport.

Quoting a Cambodian proverb saying "a good friend must help each other in difficult times," Hun Sen said that the donation of the vaccine bolstered the friendship and cooperation between both nations.

Similarly, Namhong said on Sunday that the donation symbolizes the long-lasting ties between China and Cambodia.

The Sinopharm vaccine, he added, has been recognized as a safe and effective vaccine, and it has been approved for use by many countries.

According to the prime minister, a vaccination drive will begin on Feb. 10 in the country, with prioritized groups composed of doctors and nurses, the armed forces, teachers, journalists, tuk-tuk and taxi drivers, and garbage collectors, among others.

He said the country plans to inoculate approximately 10 million people, or about 60 percent of the population.

Cambodia on Thursday authorized the emergency use of the Sinopharm vaccine, saying that "the vaccine is used safely in China and other countries."

The Southeast Asian nation has so far registered a total of 474 confirmed COVID-19 cases, with zero deaths and 454 recoveries, according to its Ministry of Health.