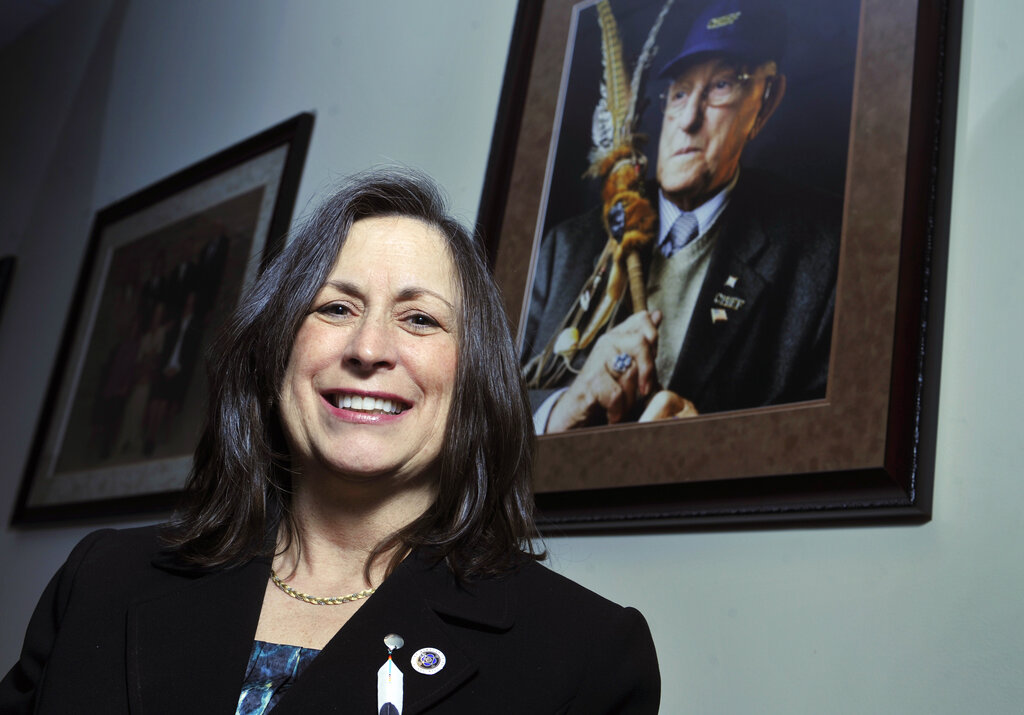 Mohegan Chief Marilynn “Lynn” Malerba, the nation's first Native American U.S. treasurer, comes from a line of chiefs who instilled in her the need to keep her tribe healthy and to survive.

“It's our job to leave footprints on the path for those who come behind us — so they may find their way easily," she said in an interview Wednesday with The Associated Press.

Now Malerba, 68, will bring that mindset to two new jobs in Washington: Last week President Joe Biden appointed her U.S. treasurer and overseer of a new Office of Tribal and Native Affairs at the Treasury Department.

As part of the first role, her name will appear on all new U.S. currency. “I hope to sign the currency either Chief Lynn Malerba or Chief Many Hearts Lynn Malerba,” she said, referencing the meaning of her name within her tribe, “Mutáwi Mutáhash.”

In the latter role, she will be thinking of new ways to help tribes develop their economies to overcome challenges that are unique to tribal lands.

“Tribes cannot offer tax incentives on their reservations” in the same way that states and local municipalities would tax economic development, she said. She added that tribes haven't been able to offer tax-exempt bonds for things like concert halls and golf courses like municipalities can.

Helping tribes develop plans to economically prosper will have benefits for the rest of the country, she said, adding: “When tribes succeed, everyone succeeds."

The Mohegan tribe has seen success with various enterprises, including casinos and resorts on the reservation and in places like Atlantic City, the Las Vegas Strip and the international airport in South Korea. The WNBA team, the Connecticut Sun, also is part of the tribe's portfolio.

As treasurer, Malerba's duties will include oversight of the U.S. Mint, serving as a liaison with the Federal Reserve and overseeing Treasury’s Office of Consumer Policy.

Malerba spoke about her new roles from the Tribal Community Center and Government Building in Uncasville, Connecticut. Treasury said Malerba will begin working at the agency within the coming weeks.

Malerba, who will remain lifetime chief of the Mohegan Indian Tribe — made up of roughly 2,400 people — previously worked as a registered nurse, and has served in various tribal government roles.

She said the Mohegan tribe has grown since the baby boomer generation, where at one point the collective was down to 500 people. The tribe’s reservation is located on the Thames River in Uncasville, Connecticut.

“For the first time in history, a Tribal leader and Native woman’s name will be the signature on our currency,” Treasury Secretary Janet Yellen said at the announcement of Malerba's new role last week.

“Chief Malerba will expand our unique relationship with Tribal nations, continuing our joint efforts to support the development of Tribal economies and economic opportunities for Tribal citizens,” Yellen said.

Treasury’s relationship with tribes has faced challenges even recently.

More than a dozen Native American tribes sued the Treasury Department in 2020 over the distribution of federal coronavirus relief funding, some of which was delayed by months.

Other tribes sued, alleging they were shortchanged because the Treasury Department relied on inaccurate population data for tribes. The Government Accountability Office, the auditing arm of Congress, detailed the agency’s missteps in a report published last October. The Treasury Department agreed to update its tribal consultation policy, but the government watchdog said Wednesday it hasn't seen a revised document.

Malerba is one of 9.7 million people in the U.S. who identify as Native American or Alaska Native, according to the U.S. Census Bureau. And while roughly eight million Native Americans are eligible to cast a ballot, census surveys estimate that large portions of the population are not registered to vote.

Biden has taken several steps to demonstrate his commitment to tribal nations. He named Deb Haaland as the first Native American to lead the Interior Department and has appointed at least three Native American judges to the federal court system.

Haaland, who is from Laguna Pueblo in New Mexico, is overseeing the federal government's reckoning of its decades-long role in Native American boarding schools, which sought to strip children of their cultures and identities. Haaland is a product of those policies, as her grandparents were removed from their families and sent to boarding schools.

Malerba said Native representation in the federal government is important because she, along with others, can help Americans honor the “culture, the history and the lands that we come from.”

“It is truly unique to be one of the first peoples of the United States, to be indigenous to these lands," she said.

At Treasury, “I will listen first and then develop a strategic plan going forward.”

“What's most exciting to me about this role is to be a part of senior leadership at Treasury and the be able to understand how we can affect change.”