Floodwaters that turned two Northern California communities into islands were expected to begin receding Thursday as a rain-engorged river finally peaked after swamping thousands of homes, businesses and other buildings. 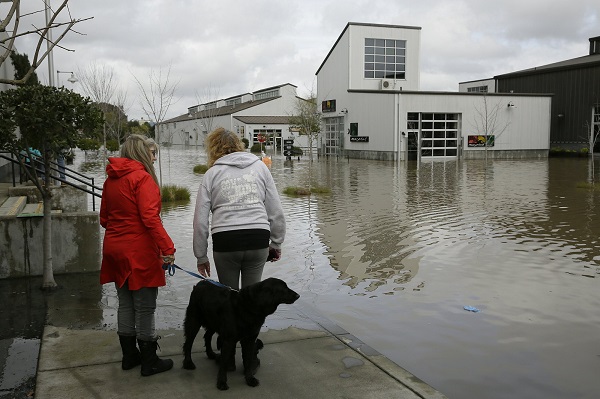 Two women and a dog look out at the flooded Barlow Market District, Wednesday, Feb. 27, 2019, in Sebastopol, Calif. (Photos: AP)

The river frequently floods in rainy weather but it had not reached that level for 25 years and wasn't expected to recede again until late Thursday night. The estimated 2,000 buildings inundated by floodwaters were mainly in and around the community of Guerneville, said Briana Khan, a Sonoma County spokeswoman.

"Guerneville has essentially become an island," Khan said. The nearby town of Monte Rio also was isolated when roads leading to it were swamped. 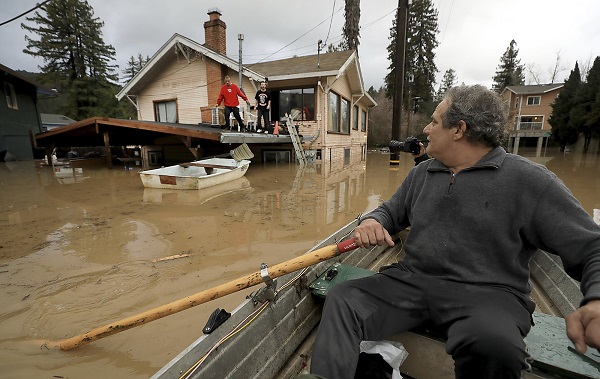 The river was one of several in Northern California that was engorged by days of rain from western U.S. storms that also dumped heavy snow in the Sierra Nevada, throughout the Pacific Northwest and into Montana, where Gov. Steve Bullock signed an emergency order to help keep up the supply of heating fuel amid frigid temperatures.

No injuries were reported in the Guerneville area and by Wednesday night the rain had eased but about 3,500 people in two dozen river communities remained under evacuation orders.

In addition, two sewage treatment plants were not working, leading to concerns about potential sewage spills, she added.

Elsewhere in the western U.S., two Amtrak trains together carrying nearly 300 passengers stopped and reversed directions because of an avalanche that closed railroad tracks in the Sierra Nevada and shut down service between Sacramento and Reno, Nevada.

In Idaho, the mountain town of Stanley became marooned Wednesday after all three highways leading to the town were closed because of drifting snow, avalanches and the risk of more slides. 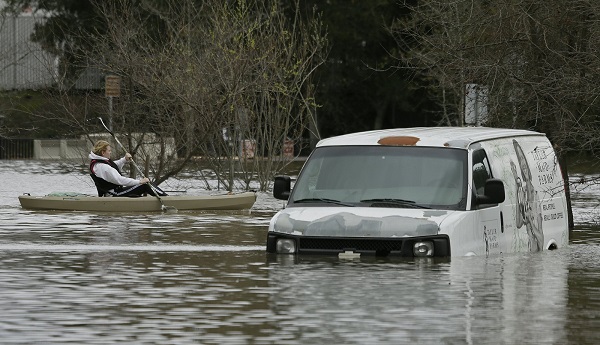 A man paddles past a submerged van in the flooded Barlow Market District parking lot Wednesday, Feb. 27, 2019, in Sebastopol, Calif.

Dozens of people were rescued from cars that became stranded Tuesday and early Wednesday after drivers tried to cross flooded roads.

Nina Sheehan, who is visiting from North Carolina, had to abandon her rental SUV after it got stuck in a flooded hotel parking lot.

"We made a decision to take the rental car through the waist-high water and we got two thirds of the way and then the car stalled," she said.

Rhondell Rasmus had pulled to the side of a road too flooded to cross in Sebastopol in Sonoma County late Tuesday night and emergency dispatchers told her to wait for help. But just before dawn, she awoke to find the car was nearly submerged and she was out of gas.

"The water just came up so fast next to my car, it was crazy," she told the Press-Democrat newspaper of Santa Rosa.

She wound up in an emergency shelter, bringing with her a handbag, a backpack and a pair of rain boots. 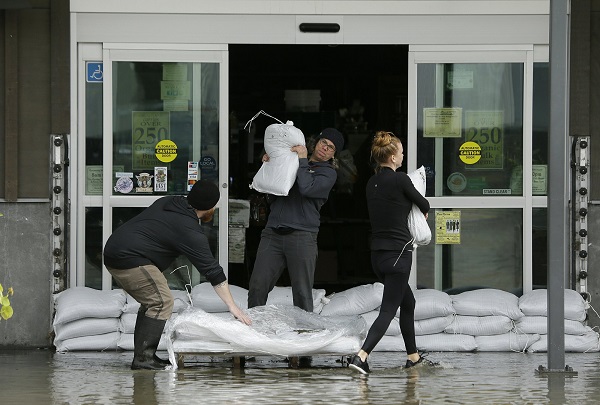 People unload sandbags in floodwater outside a market Wednesday, Feb. 27, 2019, in Sebastopol, Calif.

In Guerneville, streets became seas of muddy brown water. Jeff Bridges, a hotel co-owner who is president of the Russian River Chamber of Commerce, spent the day canoeing through town and gave a ride to a couple and their dog who were stranded in a low-lying apartment.

Five people whose homes were flooded were bunking down at his two-bedroom home.

"We saw quite a few fish swimming by my front porch," he said.

Bridges said this flood was the fourth he's experienced in 33 years and the locals took the disaster calmly.

"It's the price you pay to live in paradise," he said. "Buffalo, New York puts up with blizzards. Miami and Houston put up with hurricanes...we have floods."

However, Bridges said it will take weeks to clean up his R3 Hotel, as he has done in past floods. More than 8 feet of water inundated the 23-room business.

"Anything that's been flooded you've got to rip it out, sanitize everything...and rebuild," he said, but added nonchalantly: "Everything's fixable."