2 Americans win econ Nobel for work on climate and growth 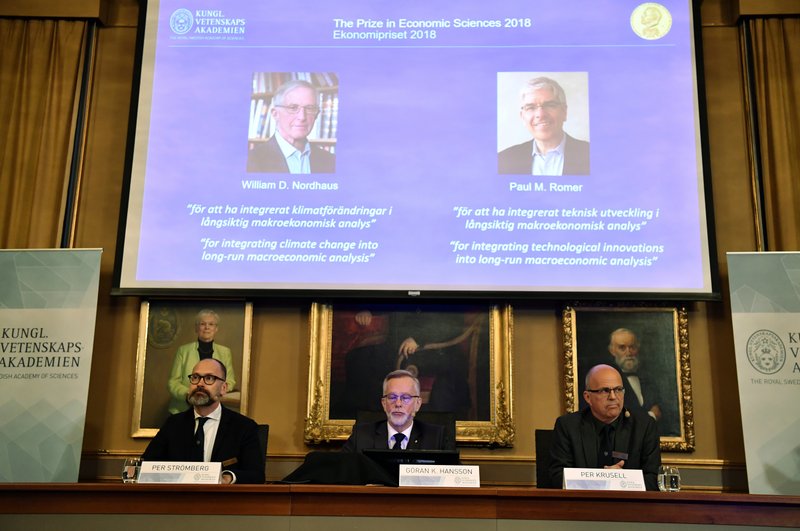 The laureates of the Nobel Prize in Economics displayed on the screen, William Nordhaus, left, and Paul Romer during a press conference at the The Royal Swedish Academy of Sciences in Stockholm, Monday Oct. 8, 2018. (Photo: Henrik Montgomery/TT via AP)

The Nobel prize in economics was awarded Monday to one American who has studied the economics of climate change — and to another whose research on technological innovation has raised hopes that human beings are creative enough to do something about it.

The Royal Swedish Academy of Sciences awarded the $1 million prize to William Nordhaus of Yale University and Paul Romer of New York University.

Nordhaus, who has been called “the father of climate-change economics,” developed models that suggest how governments can combat global warming. One key step he has endorsed is a universal tax on carbon, which would require polluters to pay for the costs that their emissions impose on society.

By using a tax rather than government edicts to slash emissions, the policy encourages companies to find innovative ways to reduce pollution — and their tax burden. Versions of a carbon tax have been used in Europe but have yet to be adopted in the United States.

Romer, who has studied why some economies grow faster than others, has produced research that shows how governments can advance innovation. At a news conference Monday, Romer said his research has left him optimistic that society can solve even a threat as deeply challenging as the warming of the planet.

“Many people think that dealing with protecting the environment will be so costly and so hard that they just want to ignore the problem,” Romer said. “They want to deny it exists; they can’t deal with it. I hope the prize today could help everyone see that humans are capable of amazing accomplishments when we set about trying to do something.”

As economists, Nordhaus and Romer have worked independently of each other. But to some longtime followers of the Nobel committee, the decision to collectively honor their research seemed a logical one.

“It’s an ingenious pairing,” said David Warsh, author of a 2007 book on Romer’s research, “Knowledge and the Wealth of Nations.”

“Nordhaus has been concerned all along with repairing the damage” to the global environment,” Warsh said. “Romer has been writing about the means at your disposal” to address such a technological challenge.

Indeed, the Nobel announcement came just one day after the United Nations’ scientific panel issued an urgent call for the world to take action about climate change — and explicitly cited Nordhaus’ work in asserting so. The Intergovernmental Panel on Climate Change argued Sunday that preventing an extra single degree of heat over the next few decades could make a life-or-death difference for millions of people and ecosystems on Earth.

In their separate ways, the work of Nordhaus and of Romer shares an interest in what drives economic growth and how to respond when unregulated market forces fail to deliver desired results.

In the 1970s, Nordhaus, already alarmed by the threat of global warming, began working on potential solutions. Gradually, he developed models to guide policymakers in balancing the economic costs and the societal benefits of combating carbon emissions. Nordhaus concluded that the most efficient approach was the use of carbon taxes, applied uniformly to different countries.

Many economists have since endorsed the idea of taxing carbon. But adopting the regulatory frameworks on a global scale has proved problematic, and the world’s political leaders are failing to meet it, the head of the United Nations said last month. Though many developed economies have adopted a carbon tax, the United States has not.

Far from developing policies to reduce climate change, President Donald Trump has argued that the threat of human-produced climate change is a hoax concocted by China to hurt the American economy. Many Republicans in Congress have also expressed skepticism about whether or how much human beings are contributing to global warming and whether the U.S. government ought to take steps to address it.

Romer explored why some countries have enjoyed faster economic growth over the long run than others. Assessing the impact of technological innovation, he concluded that unregulated economies fail to encourage enough research and development to support lasting growth.

Government policies, he found, are vital. Examples include subsidies for research and development and patent policies that strike a balance between allowing inventors to profit from their ideas and allowing others to put the innovations to work.

One of Romer’s insights was that ideas differ from other goods or services. Once you eat a Swedish meatball, for instance, it’s gone, noted Per Krusell, a Nobel committee member who is an economist at Sweden’s Institute for International Studies.

By contrast, an idea — say, a recipe for Swedish meatballs — can be shared and used over and over again, delivering continual economic benefits. In a 2015 appreciation of Romer, Stanford University economist Charles Jones wrote, “Ideas are not depleted by use, and it is technologically feasible for any number of people to use an idea simultaneously once it has been invented.”

The economics prize is the last of the Nobels to be announced this year. Last year’s prize went to an American, Richard Thaler of the University of Chicago, for work on how human irrationality affects economic theory.

The peace prize was awarded Friday to Denis Mukwege of Congo and Iraqi Nadia Murad for their work in drawing attention to how sexual violence is used as a weapon of war.