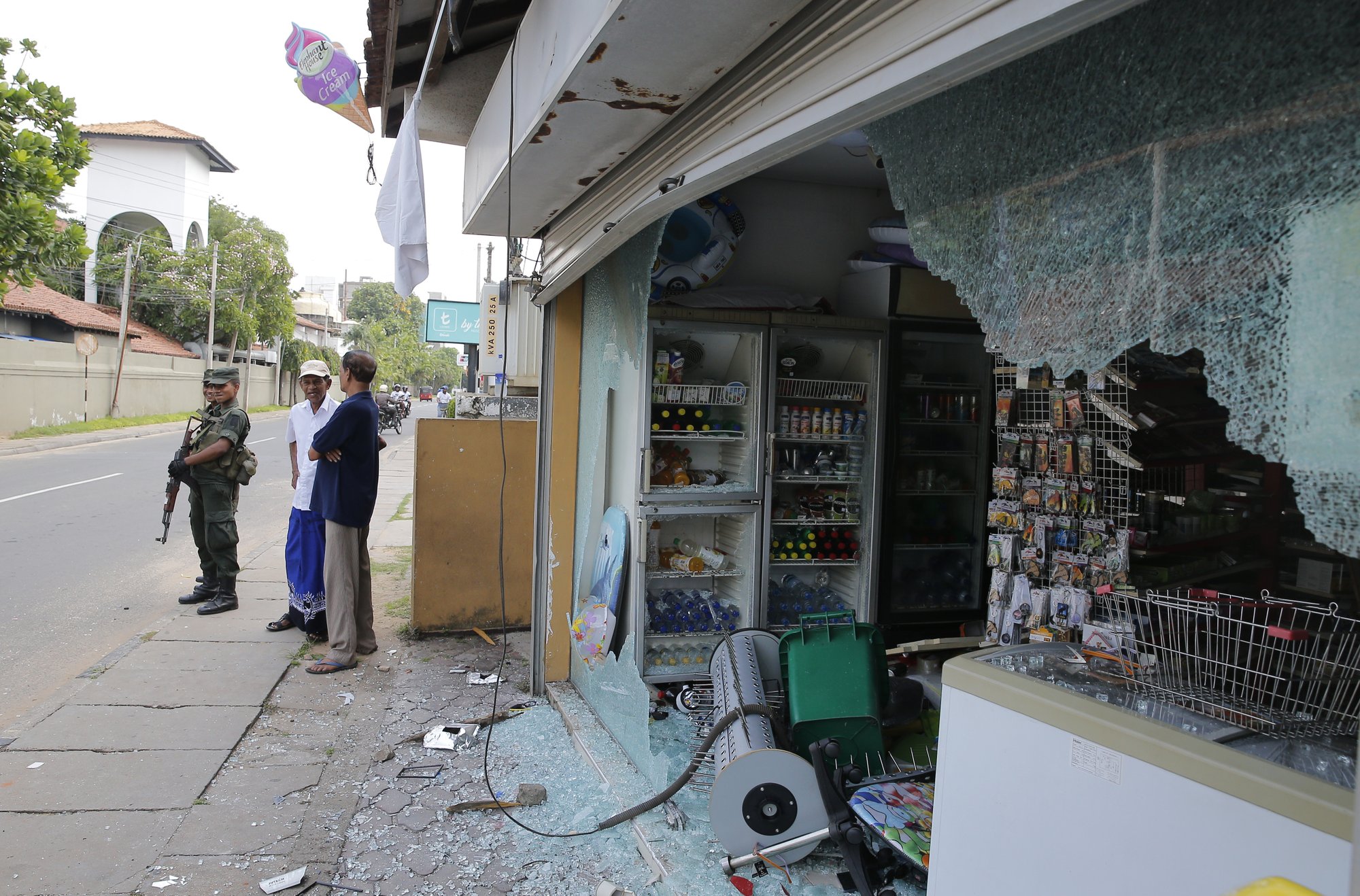 Sri Lankan army soldiers secure the area around vandalized properties owned by Muslims following an overnight clash with Christians in Poruthota, a village in Negombo, about 35 kilometers North of Colombo, Sri Lanka, May 6, 2019. (Photo: AP)

Two people were arrested after mobs attacked Muslim-owned shops and vehicles in a Sri Lankan town where a suicide bombing targeted a Catholic church on Easter, police said Monday.

Residents of the seaside town of Negombo said the mostly Catholic attackers stoned and vandalized shops on Sunday night. It was unclear how the dispute began, but some residents said a private dispute took a religious turn. Police imposed a curfew.

The clash was the first reported since the Easter bombings of churches and hotels by attackers who had pledged support for the Islamic State group. More than 250 people were killed.

Military spokesman Sumith Atapattu said several people were injured in the clashes in Negombo, where St. Sebastian’s Church was targeted on Easter.

Police spokesman Ruwan Gunasekara said on Monday that the curfew was lifted after the violence was brought under control and two people were arrested.

Gunasekara also said that investigators have found $800,000 in cash and bank accounts and another $40 million in other assets such as land, houses, jewelry and vehicles belonging to the extremist group blamed for the attack. All of the assets have been frozen, he said.

He said police are investigating the source of the assets.

A state of emergency has been in place since the Easter suicide bombings, with warnings that more attacks are possible. Catholic churches were closed for a second weekend, and some Muslims have been subjected to hate comments on social media.

A.M. Jeffry, a Muslim resident of Porutota village near Negombo, said the attackers burned a three-wheel taxi and a motorbike.

Rizwan Jeffry, a gem-seller who is not related, said about 400 people rampaging in the streets attacked his shop. Some took precious stones kept in showcases, he said.

Archbishop of Colombo Cardinal Malcolm Ranjith and Muslim clerics visited the area on Monday to appeal for peace.

“I ask the Catholics from inside this mosque not to lift your hands against Muslims,” he said at a meeting at the Poruthota Mosque.

“They are not responsible for what happened, the Muslim religion is a religion of peace and we will never be against you,” he said.

The cardinal again castigated the government for not searching Negombo thoroughly for those responsible for the attacks despite his repeated requests.

Ethnic clashes aren’t new to Sri Lanka. A civil war between rebels from the minority Tamil community and the Buddhist Sinhalese-majority government ended in 2009.

Most of Sri Lanka’s majority ethnic Sinhalese are Buddhists, but Negombo has a majority Sinhalese Catholic community.