2 arrested in Switzerland over Vienna attack 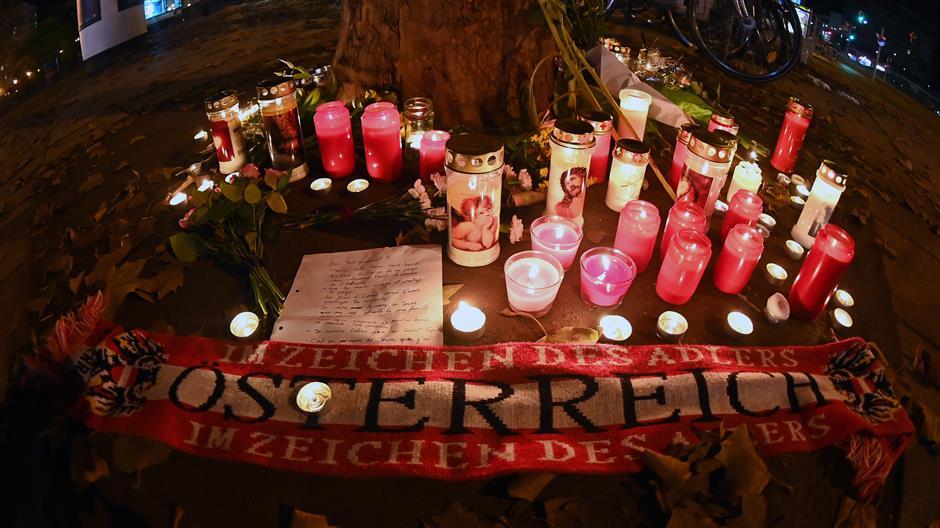 Flowers, candles and an Austria scarf are left at a memorial site at the scene of an attack in Vienna, Austria, on November 3. (Photo: AFP)

Two young Swiss men were arrested near Zurich on Tuesday in connection with the deadly shooting rampage in Vienna, Swiss police said.

"Police investigations led to the identification of an 18-year-old and a 24-year-old Swiss citizen," Zurich police said in a statement, adding that the two men were arrested on Tuesday afternoon in the northeastern town of Winterthur "in coordination with the Austrian authorities."

"The extent to which there is a connection between the two people arrested and the alleged assassin is currently the subject of investigation," the statement said.

Four people were killed during the assault in Vienna on Monday night that saw Kujtim Fejzulai, a 20-year-old described as a Islamic State group sympathiser, open fire with an automatic weapon in a busy area of the historic Austrian capital before being shot dead by police.

Austrian police said on Tuesday that Fejzulai was a known Islamic extremist who had spent time in prison.

Austrian security forces swooped on 18 different addresses, including Fejzulai's home, and made 14 arrests as they looked for possible accomplices and sought to determine if he had acted alone.

After reviewing CCTV footage of the shooting spree, which took place not far from the historic Vienna Opera House in an area teaming with people in bars and cafes, Interior Minister Karl Nehammer said the video "does not at this time show any evidence of a second attacker."

National and regional authorities in Switzerland, which borders Austria, nonetheless indicated earlier on Tuesday that they were investigating any possible links between the Vienna attack and Switzerland.

Zurich police said they had created a special working group to probe any specific links with the northern Swiss canton, which includes Winterthur.

Upon announcing the two arrests, Zurich police said they were working closely with national Swiss police and Austrian police.

"Complete clarification of any possible involvement (of the suspects) is the highest goal of both countries' security services," it said.

Winterthur, where the arrests were made, has been in the news before in connection with Islamic extremism, after the imam of the city's An'Nur Mosque was charged in 2017 with having called for the murder of non-practicing Muslims.

A source with the Swiss intelligence service told AFP that there "currently is no concrete indication of any possible attacks in Switzerland."

But the source stressed that the terror-threat level in the country was still considered "high."

Switzerland has never experienced any large-scale attacks attributed to Islamic extremists, but its terror-threat level was raised to "high" following the deadly jihadist attacks in neighboring France in 2015.

Earlier on Tuesday, Swiss President Simonetta Sommaruga expressed her "solidarity" with neighbors Austria and France, which has also been hit by several Islamist atrocities in recent weeks.

"Switzerland firmly condemns terrorism and all acts of violence," she said in a tweet.

"Our democratic values of freedom and tolerance, based on the rule of law, must serve as a shield against barbarism," she added.