KABUL, April 20 (Xinhua) -- At least two assailants were killed after four attackers stormed a ministry office building in the central of Afghanistan's capital of Kabul on Saturday, police said. 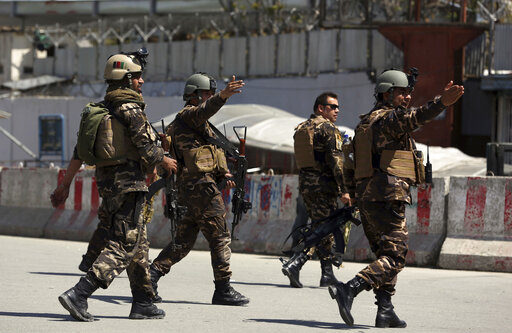 Security personnel take positions on the perimeter of the Telecommunication Ministry during a gunfight with insurgents in Kabul, Afghanistan, Saturday, April 20, 2019. (Photo: AP)

"Initial information found that one assailant detonated his explosive jacket at one of the Ministry of Communication and Information Technology's gate. Three other attackers made their way inside the compound," Kabul police chief Sayyed Mohammad Roshandel told local media.

Another attacker was shot dead by security forces inside the compound and one civilian was injured following the blast and ensuing gun firing, he said.

"We heard a huge blast which was followed by gun firing at around 11:35 a.m. local time, outside Ministry of Communication and Information Technology and the whole place has now been sealed off," witness Najib Rustami told Xinhua.

The Crisis Response Unit (CRU) or Afghan Special Operations Forces arrived at the side and cordoned off the area for precautionary measures.

The police chief added that the security forces were trying to kill or capture the remaining attackers who were disguised in military uniform.

About 2,000 ministry workers were rescued by the security forces and from nearby buildings shortly after the clashes.

The incident caused panic among the people and all the shops were closed down following the attack in the main business hub of the city, the witness added.

Sporadic firing has been continuing as of afternoon in the day.

The media and people were not allowed to enter the site and no one knows what exactly is ongoing there, he said.

Further details about the incident are still forthcoming amid the absence of any official statement.

No group has claimed responsibility for the incident yet.