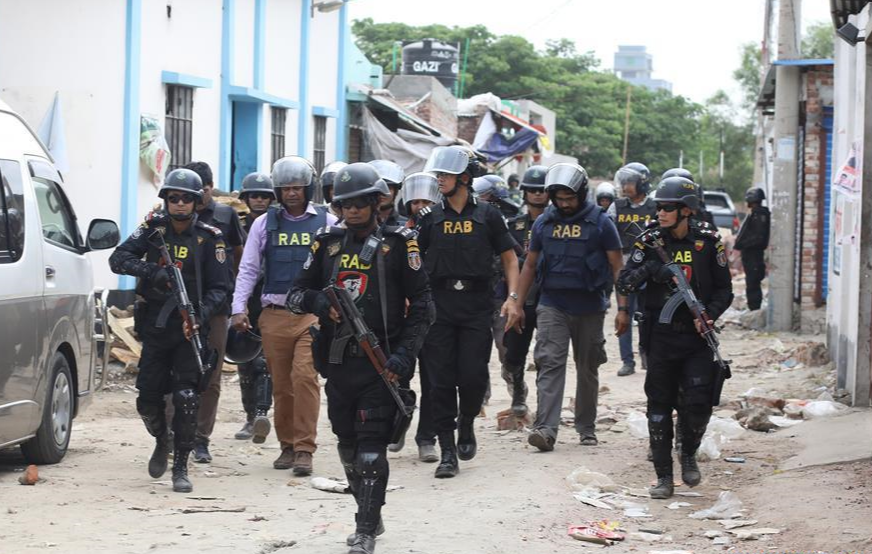 Members of Rapid Action Battalion (RAB) guard on a street during an operation against suspected militants in Dhaka, Bangladesh, April 29, 2019. (Photo: Xinhua)

Two suspected militants were confirmed dead in a series of blasts at their hideout during an operation by Bangladesh's Rapid Action Battalion (RAB), a military spokesman said Monday.

Anti-crime elite force RAB early Monday cordoned off a tin-shed house in capital Dhaka's Bosila area, where militants were suspected of being holed up.

Several explosions took place at the house after the members of RAB cordoned off the house, RAB spokesman Mufti Mahmud Khan, told journalists.

The roof of the tin-shed house was blown away in the explosions. And the bodies (of the two militants) have been blown apart in the huge explosions.

"Three legs were seen on the spot meaning two persons are confirmed dead," he said, adding they will have to identify the bodies through DNA profiling.

Law enforcers detained four persons including the caretaker of the house for interrogation.

Authorities have imposed a restriction on movement of vehicles and pedestrians around the terror hideout which is now under siege by the security forces.

Security has been tightened up in Bangladesh since militants attacked a Spanish cafe in Dhaka's Gulshan on July 1, 2016, killing 22 people mostly foreigners.

Since the cafe attack, Bangladeshi police have conducted series of large-scale operations against militants.