WORLD 2 dead, 2 wounded in shooting at Walmart in Mississippi

2 dead, 2 wounded in shooting at Walmart in Mississippi

A gunman described as a disgruntled Walmart employee fatally shot two co-workers and wounded a police officer before he was shot and arrested Tuesday morning at a Walmart store in northern Mississippi, authorities said. 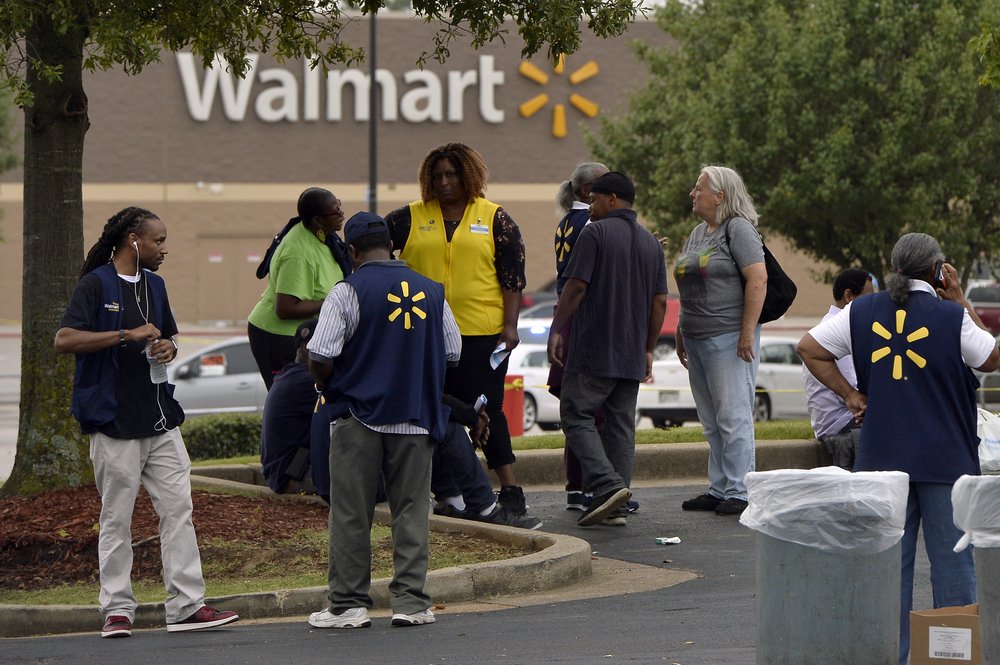 Employees gather in a nearby parking lot after a shooting at a Walmart store Tuesday, July 30, 2019 in Southaven, Miss. (Photo: AP)

Both the people killed were Walmart employees, Moore said. Employees told The Associated Press that the first was shot in the parking lot, and the second was shot inside the store.

Southaven Mayor Darren Musselwhite described the suspect as a disgruntled worker with a grievance against his employer. Abram, a Southaven resident, had been suspended from the store in recent days after he showed a knife to a co-worker. A police report had been filed, but Champion said Abram didn’t appear to have threatened the co-worker and criminal charges weren’t being pursued.

“It wasn’t an accident,” said Travis Jones, an overnight stocker who was working when he heard shots. “He knew what he was doing when he came in there.”

Jones said he saw the body of store manager Anthony Brown on the floor as they ran out of the store. “It was an ugly scene,” he said. DeSoto County Coroner Joshua Pounders said the 40-year-old Brown, an Olive Branch resident, appears to have died from a gunshot wound.

Nicholas Gales said the other slain worker was his brother, 38-year-old Brandon Gales of Hernando. Jones called Brandon Gales his best friend and an “all-around good guy,” saying he was the father of multiple children.

The shooting at about 6:30 a.m. brought a massive police response to the shopping complex, at a busy exit off Interstate 55 in Southaven, a suburb of 55,000 people.

“Our police really showed their guts today,” Musselwhite said, noting Southaven officers recently undertook active shooter training, “If it hadn’t been for their efforts there would have been more lives lost.”

Carlos Odom, 35, had just made his usual visit to his cousin, who works at the Walmart on Tuesday, and said he was leaving when he heard more than a dozen shots.

“When the cops run into the Walmart, you hear more gunshots,” Odom said. “After that, it stopped.”

Phil Cox, 70, said he had just bought some nasal spray and was in the parking lot when he thought he heard a gunshot, and then saw a man who may have been the shooter run into the store. He got into his truck to leave as police began arriving.

“Everything went crazy at that point,” Cox said, expressing sympathy for employees. “It’s just hard to believe what happened here, but it seems like it’s happening everywhere.”

Champion said police had recovered multiple weapons and a vehicle and searched Abram’s apartment. He said Abram had purchased guns legally, although he didn’t describe them, and said Abram had no prior criminal record. He said investigators were also reviewing video recordings.

Investigators also believe Abram set a fire in the store. Champion said charges could be upgraded or more charges added after the investigation concludes.

No one answered the door at an address listed for Abram on Tuesday afternoon. Some neighbors at the apartment complex about a mile (1.6 kilometers) from the shooting scene said they did not know him.

Moore said about 60 employees were working at the time. They were taken to the parking lot of an adjoining Chili’s restaurant and interviewed by officers, remaining there for hours. Some embraced, while one was placed in an ambulance. Others gathered in a circle to pray. Finally, authorities brought employees back into the store after noon, spoke to them and released them to go home. The store remained closed, even as businesses operated as usual elsewhere on the high-traffic suburban strip.

“The entire Walmart family is heartbroken by the loss of two valued members of our team,” Walmart U.S. President and CEO Greg Foran said in a statement Tuesday afternoon. “We feel tragedies like this personally, and our hearts go out to the families of our two associates and the officer who was injured.”

The company is relieved the suspect was apprehended, and appreciates the quick response by authorities and its employees, Foran said.

“We’ll continue to focus on assisting law enforcement in their investigation and on supporting our associates,” he added.