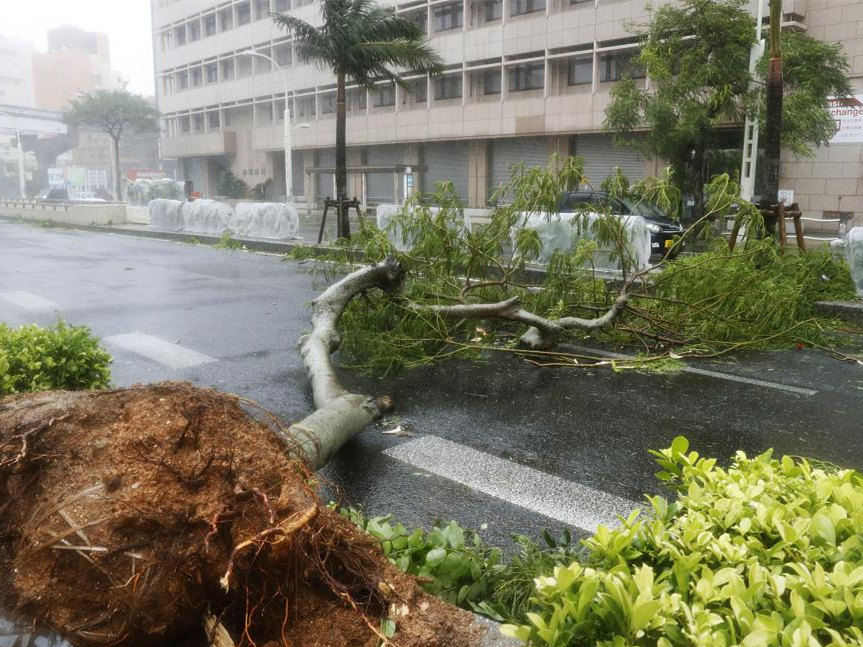 A powerful typhoon tore through Japan on Sunday and early Monday morning, leaving at lest two people dead and injuring more than 120 as well as wreaking havoc on transportation systems.

According to the Japan Meteorological Agency (JMA), Typhoon Trami first made landfall last night and carved a path through western Japan and eastern and northern parts of Honshu including the wider Tokyo area. Local media said of the fatalities known so far, a truck driver was killed by a landslide in Tottori prefecture, western Japan. Another was confirmed dead in Yamanashi prefecture, west of Tokyo, after being found in a river. A woman in her 60s has also been reported missing after being washed away by an irrigation ditch in Miyazaki prefecture, southwestern Japan. Public transport across the nation has been severely disrupted, with delays in Tokyo on Monday morning casing disruption as trains and power lines were checked. East Japan Railway Co. canceled all of its train services in the Tokyo Metropolitan area at around 8 p.m. (local time) on Sunday. According to the company, such measures, that involved alerting the public beforehand about the closure, were unprecedented. Central Japan Railway Co. meanwhile, suspended all Shinkansen bullet trains services on the Tokaido Shinkansen Line between Tokyo and Shin-Osaka after 5 p.m. Sunday. The services were resumed around 7:30 a.m. Monday however, the operator said. Shinkansen trains between Shin-Osaka and Hiroshima were halted as were numerous local rail services. Kansai International Airport in Osaka, already battered by a typhoon in September, was closed and will be reopened on Monday, the airport's operator said. Major airline including Japan Airlines (JAL) and All Nippon Airways (ANA) will likely cancel more than 180 flights on Monday because huge cancellations of flights a day earlier have left them short of aircraft. The typhoon knocked out power at 450,000 households in Tokyo and its surrounding areas early Monday morning, local reports said. The season's 24th typhoon, as of 8 a.m. local time on Monday, was moving on a northeasterly trajectory and was located around 120 km towards the south of Hokkaido's Cape Erimo, the weather agency said. The typhoon is traveling at a speed of around 95 km with an atmospheric pressure of 970 hectopascals at its center and packing winds of up to 180 kph, the agency said.