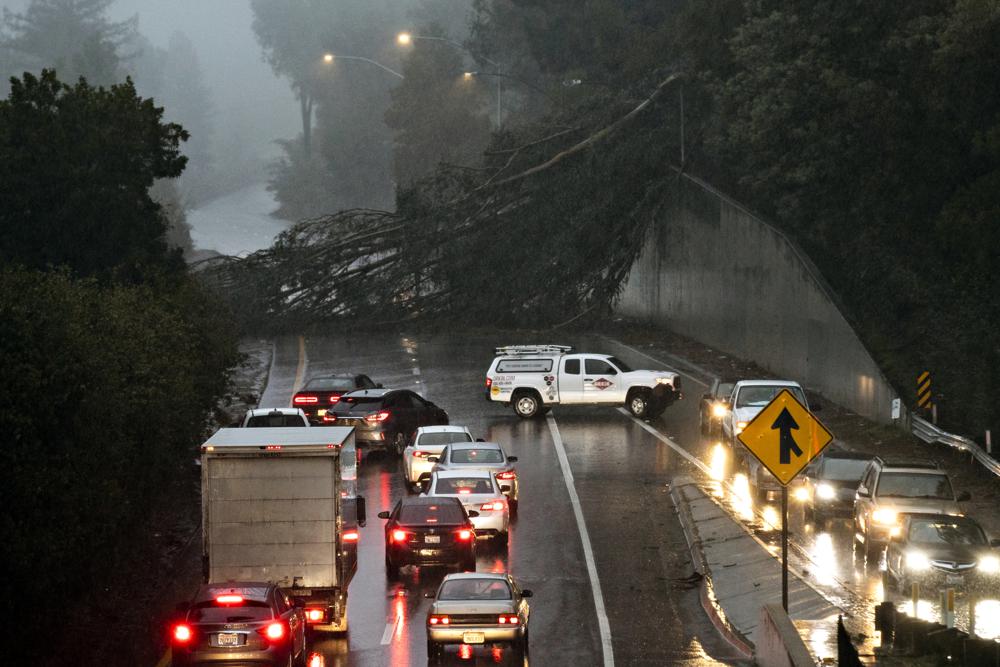 Firefighters in Millbrae, just south of San Francisco, rescued two people who had climbed atop a vehicle at a flooded underpass. But they weren’t able to reach people in a fully submerged car, San Mateo County sheriff’s Det. Javier Acosta said.

In the Sierra Nevada, an evacuation warning was issued for about 150 homes downstream of Twain Harte Lake Dam after cracks were found in granite that adjoins the manmade part of the 36-foot-high (11-meter) structure. Authorities began releasing some water, but the dam didn’t seem in any immediate danger, Tuolomne County sheriff’s Sgt. Nicco Sandelin said.

The precautions for Southern California came as precipitation that had mostly been falling in Northern California this week spread throughout the state. Heavy rain was falling Thursday night in the southern part of the state.

Earlier, firefighters used a litter basket to rescue a man stranded on a bridge pillar above the flowing Los Angeles River.

The National Weather Service issued an advisory for minor flooding of roadways and low-lying areas in counties around San Francisco Bay and an avalanche warning was posted for eastern Sierra Nevada backcountry areas in Mono and Inyo counties.

Tire chains were required on several major routes through the Sierra, and flooding closed a stretch of coastal Highway 1 in San Luis Obispo County and a section of U.S. 101 in Santa Barbara County.

Forecasters issued a flood watch for areas east and southeast of Los Angeles starting Thursday evening because of possible heavy overnight rain fed by an atmospheric river, a long plume of moisture from the Pacific Ocean.

Periods of rain and snow were predicted for California through Christmas and into next week. Snow levels in the north could drop to 1,000 feet (300 meters) or lower by Sunday, forecasters said, warning holiday travelers to be ready.

“Foothill locations that do not normally receive snow should prepare for winter conditions, especially from Sunday morning through Tuesday morning,” the Sacramento weather office said.