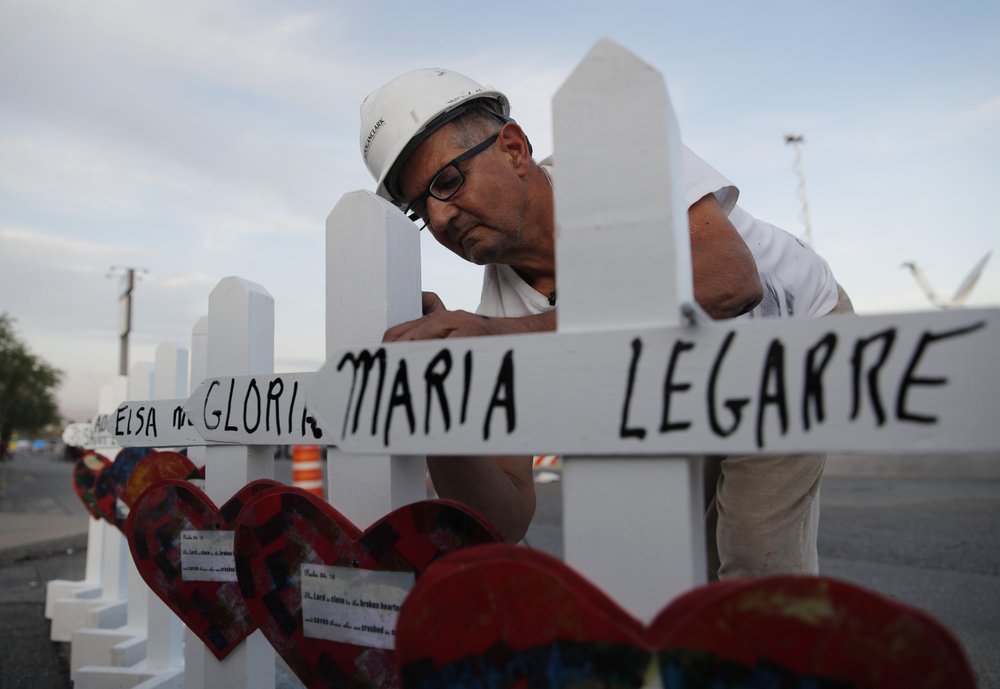 Greg Zanis prepares crosses to place at a makeshift memorial for victims of a mass shooting at a shopping complex Monday, Aug. 5, 2019, in El Paso, Texas. (Photo: AP)

Two more victims of the mass shooting at a crowded Walmart in El Paso, Texas, died Monday at a hospital, raising the death toll for the attack to 22.

The Del Sol Medical Center did not release the names or ages of the patients who died, but hospital officials described one as an elderly woman.

One patient who died had major abdominal wounds affecting the liver, kidneys and intestines. That patient also received a “massive blood transfusion,” Dr. Stephen Flaherty said at a news conference.

Another patient remained in critical condition at the hospital, and five others were in stable condition, two days after the Saturday attack in which more than two dozen people were wounded. Victims were also treated at other El Paso hospitals.

Police still have not released a list of the victims of the attack, which happened hours before a separate mass shooting in Dayton, Ohio, that claimed nine lives.

Speaking at the White House on Monday, President Donald Trump condemned the two attacks that killed 31 people and wounded dozens of others. He called for bipartisan cooperation to respond to an epidemic of gun violence, but he offered scant details on concrete steps that could be taken.

“We vow to act with urgent resolve,” Trump said.

Federal authorities said they are weighing hate-crime charges against the suspected El Paso gunman that could carry the death penalty. The suspect, 21-year old Patrick Crusius, has been booked on state capital murder charges, which also carry a possible death penalty.

Mexican officials have said six Mexican nationals were among the dead in the border city where tens of thousands of Mexicans legally cross each day to work and shop.

Investigators focused on whether the El Paso attack was a hate crime after the emergence of a racist, anti-immigrant screed that was posted online shortly beforehand.

Authorities searched for any links between the suspect and the material in the document that was posted online, including the writer’s expression of concern that an influx of Hispanics into the United States will replace aging white voters, potentially turning Texas blue in elections and swinging the White House to Democrats.

The writer denied he was a white supremacist, but the document says “race mixing” is destroying the nation and recommends dividing the United States into territorial enclaves determined by race. The first sentence of the four-page document expresses support for the man accused of killing 51 people at two New Zealand mosques in March after posting his own screed with a conspiracy theory about nonwhite migrants replacing whites.

The shootings in Texas and Ohio were the 21st and 22nd mass killings of 2019 in the US,according to an AP/USA Today/Northeastern University mass murder database that tracks homicides where four or more people killed — not including the offender.

Including the two latest attacks, 127 people had been killed in the 2019 mass shootings.

Since 2006, 11 mass shootings — not including Saturday’s — have been committed by men who are 21 or younger.