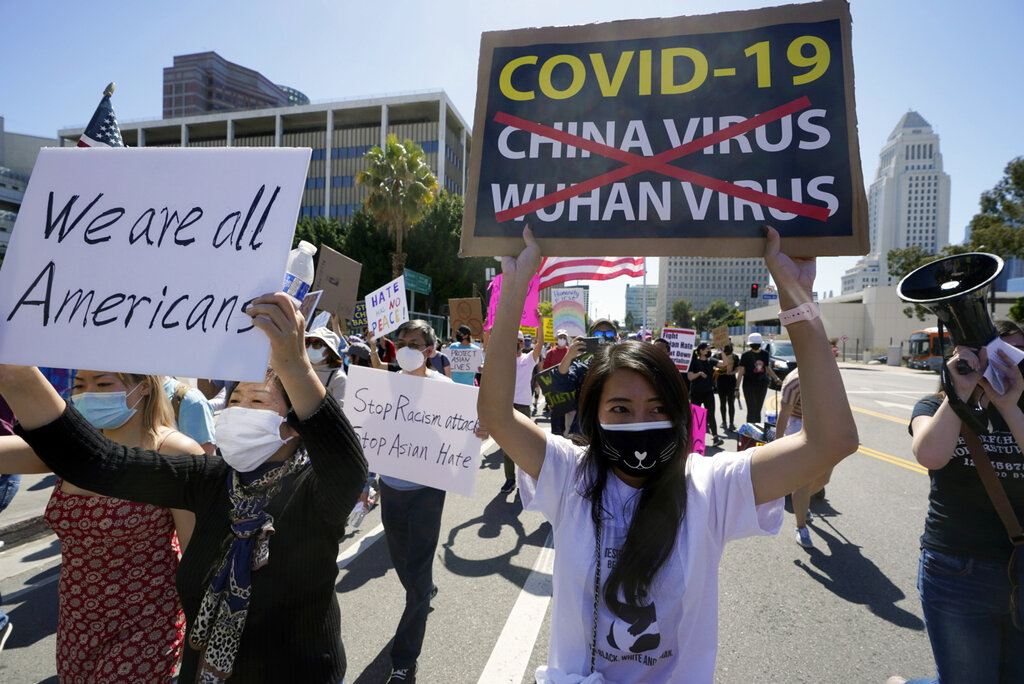 Prosecutors in Seattle and San Francisco have charged men with hate crimes in separate incidents that authorities say targeted people of Asian descent amid a wave of high-profile and sometimes deadly violence against Asian Americans since the pandemic began.

Hundreds of protesters took to the streets of Los Angeles and throughout the San Francisco Bay Area on Saturday, the latest in a series of rallies in response what many said has become a troubling surge of anti-Asian sentiments.

“We can no longer accept the normalization of being treated as perpetual foreigners in this country,” speaker Tammy Kim told a rally in LA's Koreatown.

At rally attended by more than 1,000 people in San Francisco's Civic Center, the city's police chief, Bill Scott, drew loud applause when he said, “Hate is the virus, and love is the vaccination.”

In San Francisco, Victor Humberto Brown, 53, made a first court appearance after authorities say he repeatedly punched an Asian American man at a bus stop while shouting an anti-Asian slur.

Brown was initially booked on misdemeanor counts, but prosecutors recently elevated the case to a felony, the San Francisco Chronicle reported. He said in court that he has a post-traumatic stress disorder.

In Seattle, according to court documents, Hamner yelled profanities and threw things at a woman stopped at a red light with her two children, ages 5 and 10, on March 16. Three days later, authorities say Hamner cut off another car driven by an Asian woman, yelled a profanity and the word “Asian” at her and then threw a water bottle at her car after charging at her when she pulled into a parking spot.

Hamner was being held on $75,000 bail on Saturday. It wasn't immediately clear if Hamner, who has not yet made a court appearance, had retained an attorney or would be assigned a public defender.

In the first instance, the woman told her 10-year-old daughter to try to take a cellphone photo of the man. The woman, identified by KIRO-TV as Pamela Cole, posted about the incident on social media and a friend's husband identified Hamner as a possible suspect.

The second woman who was accosted had a dashboard camera in her vehicle that captured the license plate of the other car, which is registered to Hamner, according to court documents. The police detective investigating the case reviewed the video and determined the women’s assailant “was clearly Hamner,” according to the charges.

Cole, who said she identifies as part Chinese and part Malaysian, told KIRO-TV she felt like “a sitting duck” when Hamner approached her car, hitting his fists together and screaming at her to “Get out! Get out!” while spewing profanities about her Asian heritage.

“I was in complete shock. Are you talking to me?” Cole told the station.

“He jumps out the car, and he’s charging at us,” she said. “That was the scariest part for me."

In San Francisco, Ron Tuason, an Army veteran of Filipino, Chinese and Spanish descent, told the Chronicle he was at a bus stop in the city’s Ingleside neighborhood on March 13 when Brown approached him, yelling “Get out of my country” before using a racial slur meant to denigrate Asian people. Tuason said Brown also said, “It’s because of you there’s a problem here.”

Tuason, 56, said he believes Brown was referring to the coronavirus. Brown punched him multiple times, he said, knocking him to the ground. He suffered a black eye and a swollen cheek as a result of the attack and said he’s also experiencing memory loss.