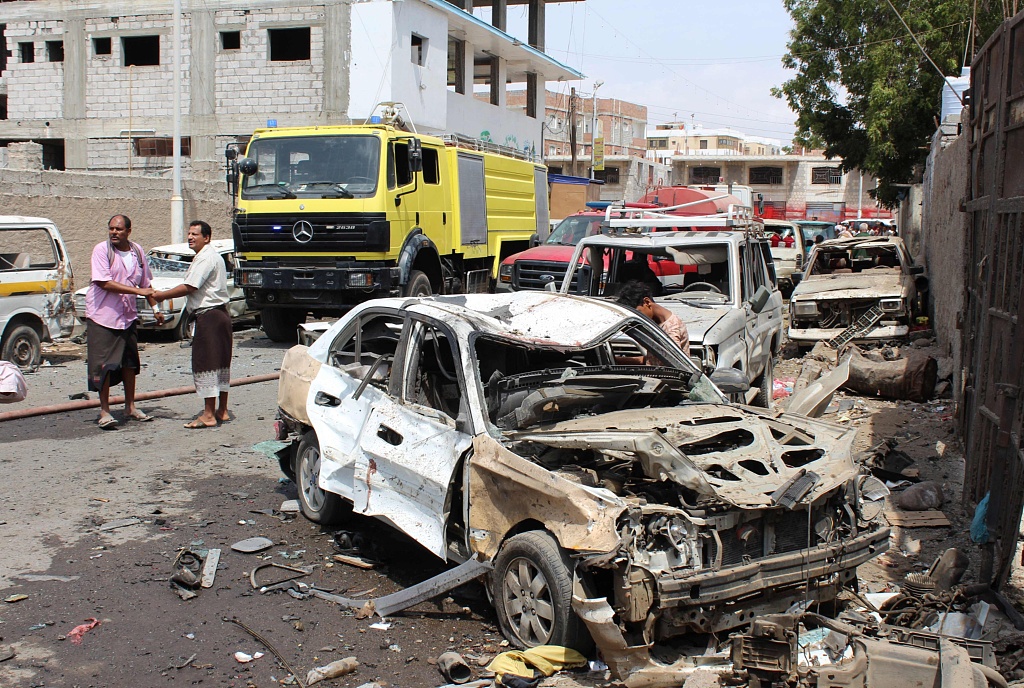 A picture taken on March 13, 2018 in the southern Yemeni city and government bastion of Aden shows a Yemenis inspecting debris and car wreckage in the aftermath of an explosion from a suicide bombing claimed by the Islamic State (IS) group which hit UAE-trained Yemeni troops. The attack in the north of the port city hit an army mess hall serving the so-called Security Belt brigade, which is supported by government ally the UAE, according to a security source. (File photo: VCG)

ADEN, Yemen, Jan. 8 (Xinhua) -- Two civilians were killed and 12 others wounded when a roadside bomb blast targeted their vehicle in Yemen's southern province of Abyan on Tuesday, a local official told Xinhua.

The blast occurred in Abyan's town of Mahfad when a running vehicle touched off an improvised explosive device (IED) placed by unknown gunmen along a main road near a security outpost, the local official said on condition of anonymity.

A total of 12 people were injured by the explosion and all the victims were evacuated to public hospitals to receive treatment, the source said.

Local government sources blamed militants of the Yemen-based al-Qaida al-Qaida in the Arabian Peninsula (AQAP) for planting the IED to target security forces stationed in the town.

However, terror groups such as AQAP and the Islamic State that are largely relying on roadside and suicide bombings are yet to claim responsibility for the attack.

Government officials, including high-ranking security commanders and intelligence officers, have been the prime targets in kidnapping incidents as well as armed attacks launched by unknown gunmen in recent days.

Saudi Arabia leads an Arab military coalition that intervened in Yemen in 2015 to support the government of President Abd-Rabbu Mansour Hadi after Houthi rebels forced him into exile.