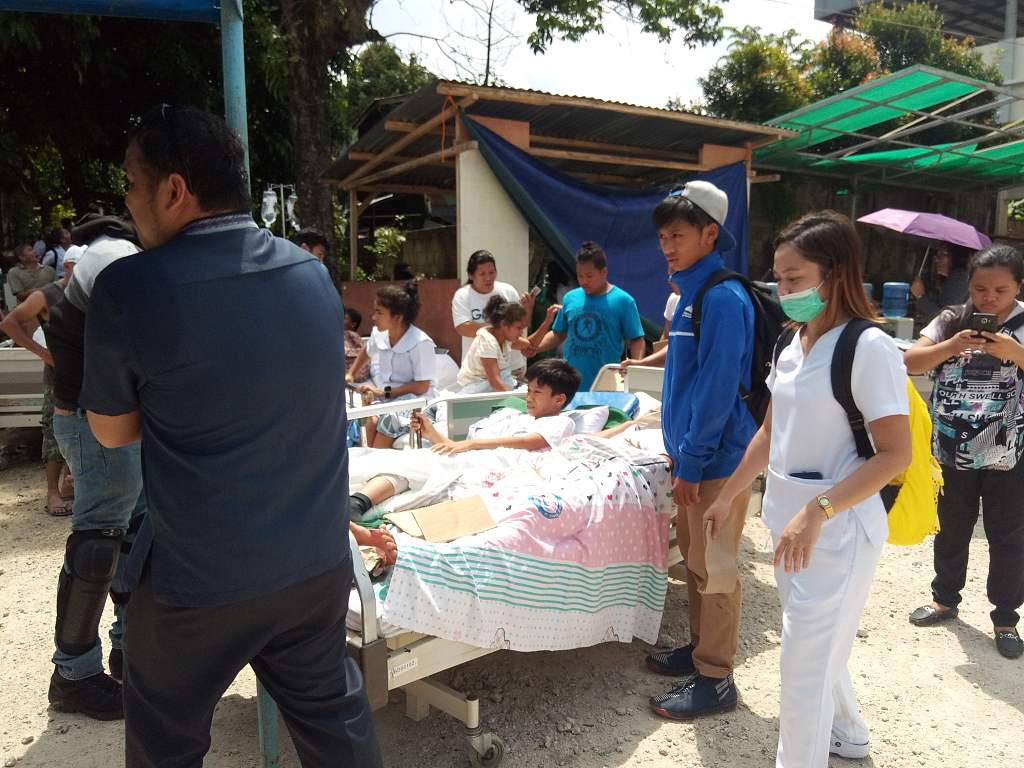 Medical workers and residents evacuate patients to a safe place outside the hospital after a 6.6-magnitude earthquake hit Makilala town, North Cotabato, on the southern island of Mindanao on October 29, 2019. (Photo: VCG)

A local government disaster agency and police reported that a 66-year-old man from Koronadal City in South Cotabato and a 15-year-old boy from Magsaysay town in Davao del Sur died after they hit by falling debris. At least 43 were injured in Kidapawan City and Mlang town in Cotabato province, officials added.

The Philippine Institute of Volcanology and Seismology (Phivolcs) said the inland tremor, which struck at 9:04 a.m. local time hit at a depth of 7 km, about 25 km southeast of Tulunan town.

It was the second powerful earthquake that rocked the province in the central Mindanao region this month. Tulunan town was also the epicenter of the 6.3-magnitude earthquake that jolted the region on Oct. 16.

The tremor, which was tectonic in origin, so far triggered dozens of large and small aftershocks, ranging from magnitude of 1.5 to 6.1, the institute said. More than an hour after the initial quake, the institute recorded a 6.1-magnitude aftershock.

Police are also verifying reports that one villager was killed and at least two are missing in a quake-triggered landslide in Magsaysay town. At least 300 people were also reportedly injured in that town.

Local officials said the strong earthquake sent panicking people out of their houses and buildings.

The officials said the tremor cut the power supply in many of the affected provinces, knocked down electric posts and shattered glass. Patients of a local hospital in Kidapawan were evacuated out of the building for safety, they added.

The tremor forced local government units to suspend classes and work in the region.

The Philippines, which lies along the Pacific Ring of Fire, is surrounded with numerous active faults and trenches on both sides of the archipelago. The country has frequent seismic activity, registering quakes everyday, though most are not felt.