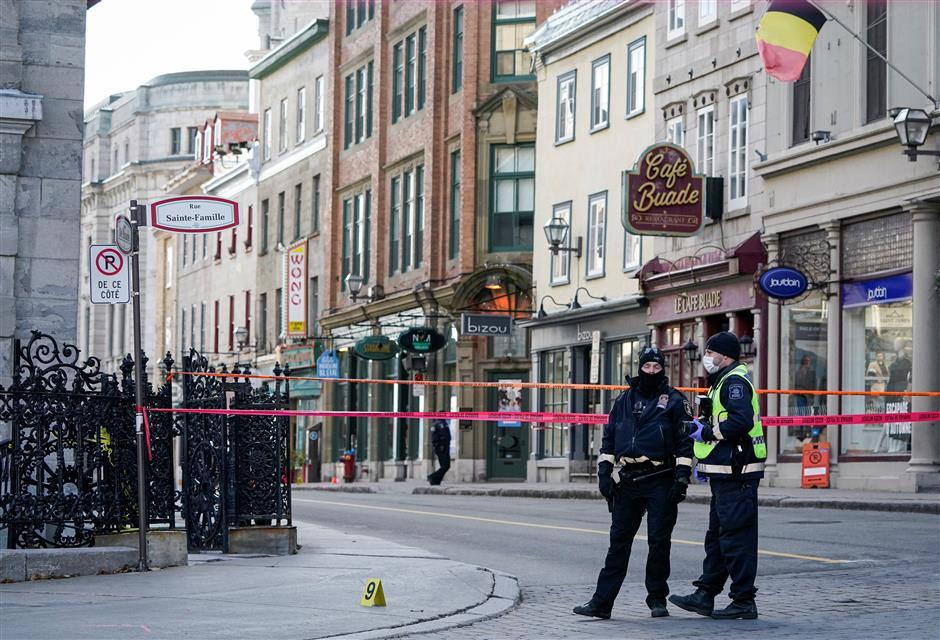 Police officers secure the area where multiple people were stabbed near the Parliament Hill area of Quebec City, Canada on Sunday. (Photo: Agencies)

A swordsman dressed in a medieval costume killed two people and wounded five others in a Halloween rampage in Quebec City, Canadian police said on Sunday after arresting the suspect.

The attacks occurred late Saturday in multiple locations in the Old Quebec neighborhood, near the tourist hotspot Chateau Frontenac and the National Assembly, the Quebec provincial parliament, according to police.

The suspect, “a man in his mid-20s,” was armed with a sword and dressed in “medieval clothing,” Quebec City police spokesman Etienne Doyon said.

“According to our initial information, nothing indicates to us that the suspect acted for anything other than personal motivation,” police said in a tweet.

According to three witnesses quoted by Quebec newspaper Le Soleil, the attacker “slit the throat” of his first victim near the Chateau Frontenac hotel and there was “a lot of blood.”

The man then continued on Rue des Remparts, where the second person was killed, before heading to the Old Port, wounding the other victims, according to the newspaper.

Quebec resident Karin Lacoste said she was going to a convenience store to do some shopping around 11pm when she saw several armed police officers wearing bulletproof vests. “There was one who told me ‘run to your home because there is someone walking around, he is a killer and he has killed people.’”

The suspect was arrested early Sunday after a manhunt through the streets of Old Quebec, Doyon said. The suspect has been formally identified but police have not released his identity.

The five survivors wounded in the rampage had suffered injuries of varying severity, Doyon added. Police have not released any details on the identities or ages of the victims.