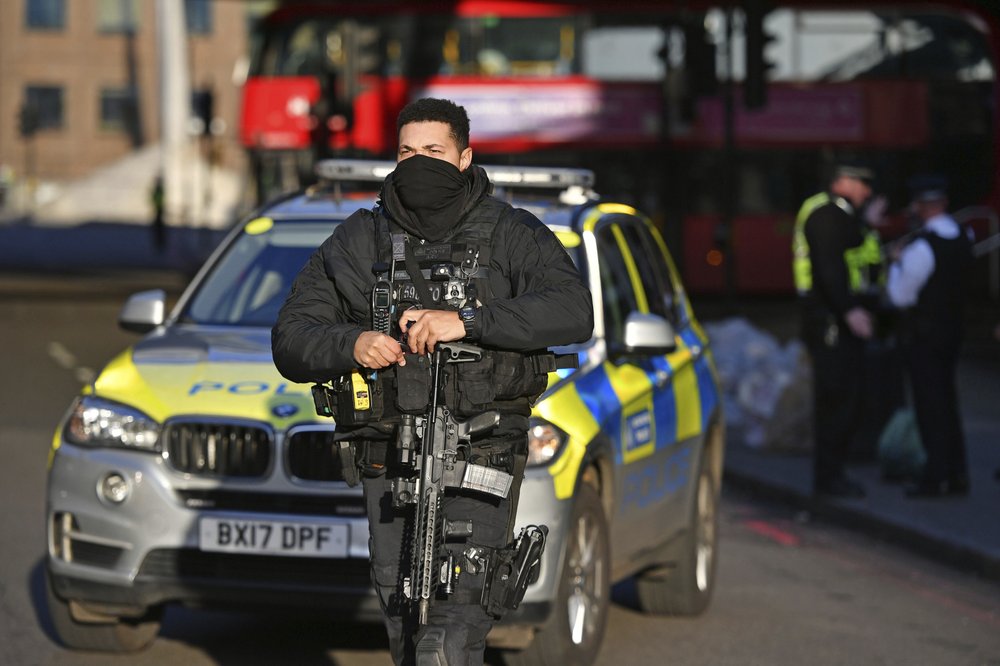 Armed police and emergency services at the scene of an incident on London Bridge in central London following a police incident, Friday, Nov. 29, 2019. (Photo: AP)

LONDON, Nov. 29 (Xinhua) -- Two members of the public died after a stabbing attack at London Bridge on Friday afternoon, in which police also shot dead the suspect, BBC reported.

A British government source confirmed that two members of the public died, but gave no further information, BBC said in an online story.

The Met Police has declared the attack "a terrorist incident."

The male suspect, who died at the scene, was believed to have been wearing a fake explosive device, police said.

Neil Basu, the head of UK counter-terrorism policing, said: "A male suspect was shot by specialist armed officers from City of London Police and I can confirm that this suspect died at the scene."

"We believe a device that was strapped to the body of the suspect is a hoax explosive device. Officers continue to carry out meticulous searches in the area to ensure there is no outstanding threat to the public," Basu said.

British media reported that more than 10 others were injured in the attack.

Videos on social media showed members of the public wrestling a man to the floor who then dispersed before the man is shot by an armed police officer.

Another man in a suit and jacket can be seen running from him, having apparently retrieved a large knife.

"I want to pay tribute to the extraordinary bravery members of the public who physically intervened to protect the lives of others," Johnson said in a statement.

"I can assure you and assure everyone that anybody involved in this crime -- in these attacks -- will be hunted down and will be brought to justice," he said.

"This country will never be cowed, or divided or intimidated by this sort of attack, and our British values will prevail," he added.

In addition, UK train operator National Rail announced that London Bridge station was reopened, but trains may continue to be delayed, cancelled or revised.