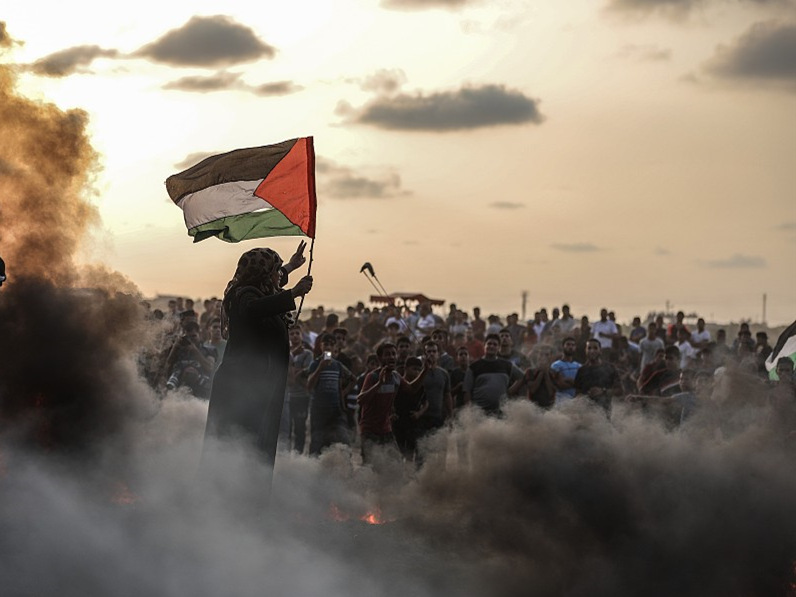 A Palestinian woman holds Palestinian flag during the Israeli forces' intervention on the 23rd Friday of 'Great March of Return' demonstration near Israel-Gaza border, in east of Shuja'iyya neighborhood, Gaza City on August 31, 2018. (Photo: VCG)

Gaza Health Ministry said in a statement that two young men were injured by the shrapnel of an Israeli missile fired at the northern Gaza Strip town of Beit Hanoun, close to the border with Israel.

An Israeli army spokesman said in a press statement that an Israeli army aircraft targeted a group of arson balloon launchers in northeast Gaza Strip close to the borders with Israel.

Since March 30, the Palestinians have been launching arson kites and balloons from the Gaza Strip into southern Israel, which had caused severe damage to large areas of agricultural fields and groves.

On Friday, the Israeli media reported that more than 20 arson balloons were launched from the Gaza Strip into Israel and caused large fires to the agricultural fields in southern Israeli farms.

Hamdouna was shot by Israeli soldiers' gunfire and was critically wounded on July 14 during his participation in the protests and rallies called the "Great March of Return" in eastern Gaza Strip.

Al-Qedra said that the death toll, since the beginning of the event on March 30, has climbed to 172, and more than 18,000 were injured.

The highest commission of the event called on Friday the Palestinians in the Gaza Strip to join the 24th Friday of the "Great March of Return" to protest against U.S. President Donald Trump's decisions against the Palestinians.