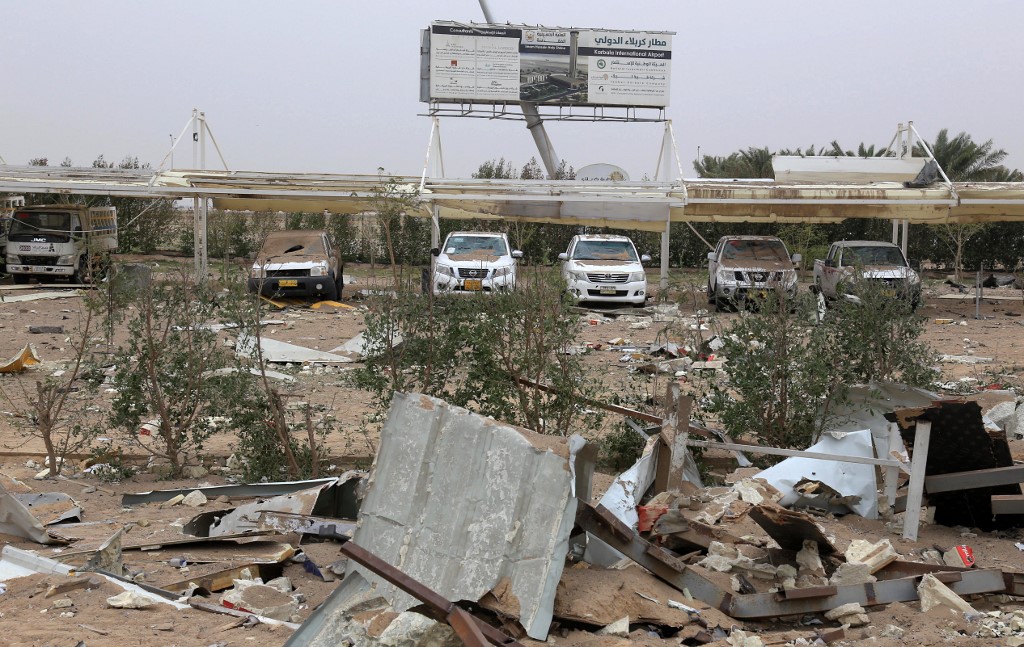 File photo: A picture taken on March 13, 2020 shows destruction at Karbala airport in the Iraqi shrine city, one of the areas targeted by US military air strikes against a pro-Iranian group in Iraq following the deaths of two Americans and a Briton in a rocket attack the previous night on a US base in Taji.  (Photo: AFP)

One of the attacks took place before dawn when two rockets were fired from al-Jihad neighborhood in southwestern Baghdad and landed on al-Jadriyah neighborhood near the Green Zone, without causing human casualty, the media office of the Joint Operations Command said in a statement.

One of the rockets landed near a restaurant behind Babylon Hotel and the other landed near the office of the Iraqi Airways in Jadriyah, setting a civilian car on fire, the statement said.

Earlier, another attack occurred after midnight when two Katyusha rockets landed near Baghdad international airport in southwestern the capital without causing casualties, a police source told Xinhua on condition of anonymity.

Sirens were heard in the nearby Camp Victory, which houses U.S. troops, the source added.

No group has so far claimed responsibility for the attacks, but Baghdad airport and the Iraqi military bases housing U.S. troops across Iraq, as well as the U.S. embassy in the Green Zone, have been frequently targeted by mortar and rocket attacks.

According to media reports, U.S. Secretary of State Mike Pompeo warned Iraq earlier that the United States would close its embassy in Baghdad if the Iraqi government does not move to stop rocket attacks.

Pompeo's warning prompted the Iraqi leaders to call on the United States to reconsider the decision of closing its embassy in Baghdad and pledged to control the arms and to protect diplomatic missions in the country.

U.S. troops have been deployed in Iraq to support the Iraqi forces in the battles against the Islamic State militants, mainly providing training and advising to the Iraqi forces.