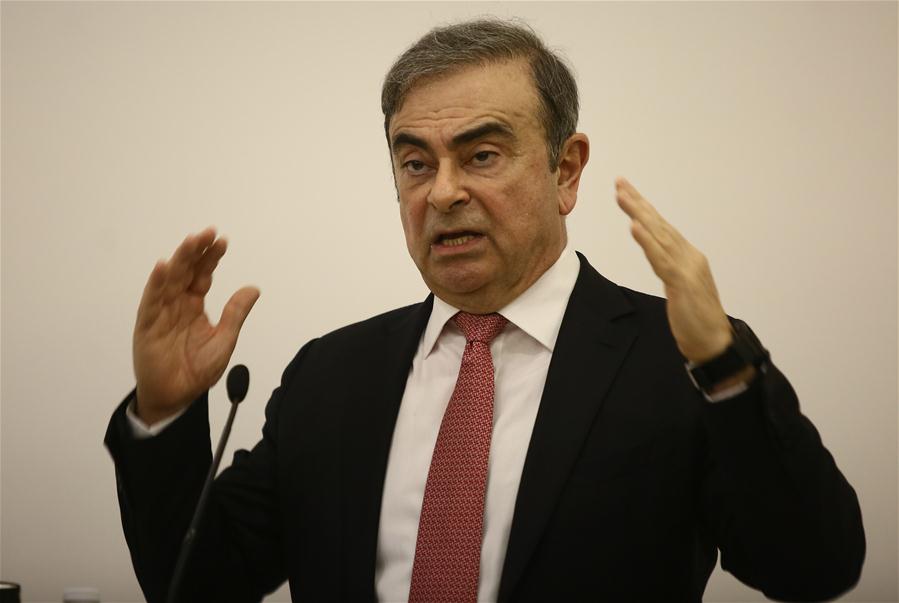 Former Nissan chief Carlos Ghosn speaks at a press conference in Beirut, Lebanon, Jan. 8, 2020. Carlos Ghosn denied on Wednesday all accusations brought against him by Nissan, adding that he will fight until the end to prove his innocence, local TV channel MTV reported. (Photo by Bilal Jawich/Xinhua)

The Tokyo District Court sentenced Michael Taylor, a 60-year-old former Green Beret, to two years in prison, and his 28-year-old son Peter to one year and eight months in prison. In Japan, the maximum penalty for helping the defendant escape is three years in prison.

When announcing the ruling, Presiding Judge Hideo Nirei said that there is no prospect of holding Ghosn's trial because of his escape.

The two had pleaded guilty and apologized for helping Ghosn escape. Their defense team had requested suspended sentences.

Tokyo prosecutors had demanded to sentence the father to two years and 10 months and the son to two years and six months in prison, saying that the Taylors' criminal liability was "grave" because they were involved in insulting and weakening the Japanese judiciary.

The prosecutors had said that the monetary gain was the motivation of the Taylors since they received approximately 860,000 U.S. dollars before the escape and around 500,000 dollars' worth of cryptocurrency after Ghosn successfully escaped from Japan.

In addition, after finishing escape-related preparations such as renting a private jet, the two could have the remainder of the funds provided by Ghosn, according to the prosecutors.

According to the ruling, the Taylors helped Ghosn escape from his residence in Tokyo's Minato Ward first to a hotel in Tokyo and then to another in Osaka Prefecture on Dec. 29, 2019, before heading to Kansai International Airport.

Then, they packed Ghosn into a box, went through airport security, and flew him aboard the private jet to Turkey under the situation that they knew Ghosn was prohibited from traveling abroad due to bail conditions.

Ghosn flew to Lebanon, which is one of three countries he is a national and has no extradition treaty with Japan.

The Taylors were arrested in Massachusetts in May last year by U.S. authorities at the request of Japanese prosecutors and extradited to Japan from the United States in March.

Ghosn, first arrested in November 2018, was accused of underreporting his compensation by millions of yen for years and misusing the automaker's funds. However, he has denied all charges and insisted that other company officials conspired to drive him out of the company. He fled to Lebanon while out on bail awaiting trial in December 2019.

Another former executive of Nissan, Greg Kelly, is on trial in Tokyo because he is suspected to assist in underreporting Ghosn's compensation. Kelly says he is innocent.