WORLD 20 years after 9/11 attacks: What War on Terror brought US and world

20 years after 9/11 attacks: What War on Terror brought US and world

Washington (People's Daily) - This Saturday marks the 20th anniversary of the terrorist attacks on September 11, 2001. It will be a day of remembrance in the US, with various ceremonies across the country to pay tribute to those who lost their lives on one of the most difficult days in US history. 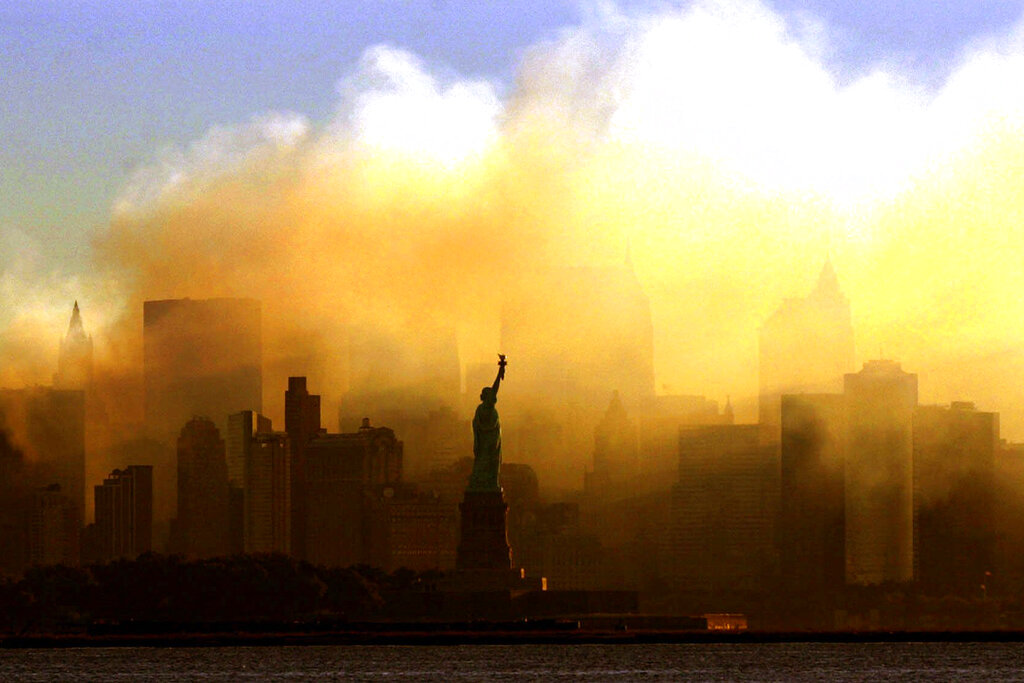 In this Saturday, Sept. 15, 2001 file photo, the Statue of Liberty stands in front of a smoldering lower Manhattan at dawn, seen from Jersey City, N.J. (Photo: AP)

However, analysts criticized the US for launching a series of overseas wars such as the 20-year war in Afghanistan after 9/11 and causing huge uneasiness and impact to both the US and the world. The US government has pursued hegemonic policies and spared no efforts in securing its global standing. Waging wars has become a crucial tool to meet that end. The endless blood-shedding wars cost severe civilian casualties that decrease American credibility.

It has been 20 years since that fateful Tuesday on September 11, 2001, a day that marked a before-and-after for the US homeland security. Four airplanes were hijacked by members of the Islamist terrorist group Al-Qaeda, with the intention to hit key landmark targets, including the World Trade Center, and Pentagon.

The 9/11 attacks caused almost 3,000 deaths and tens of thousands of injuries, as well as long-term health problems for people exposed to dust and debris.

In response to the terrorist attack, then-US President George W. Bush announced the start of a new type of war, one without defined borders, boundaries, or timescales. He deployed US troops to Afghanistan and vowed to “win the war against terrorism.” It was the first step of the US’ war on terror in the following years which also reshaped the pattern of the world. US troops left their footprints in Afghanistan, Iraq, and Syria.

The timing of the 20th anniversary of 9/11 is delicate, as the US just ended its 20-year war in Afghanistan with a chaotic withdrawal. People ask whether the Afghan war, a conflict that left 2,448 US soldiers dead as of April this year and cost taxpayers over $2 trillion, was worth it. A report from the Costs of War project at Brown University revealed that 20 years of post-9/11 wars have cost the US an estimated $8 trillion.

However, the US does not seem to change the situation in Afghanistan by paying such a heavy price: the Taliban regained control just before the Americans left. Washington Post reported that the US quickly fell back into Cold War habits after the 9/11 attacks. “9/11 didn’t change everything. Old fights and illusions still haunted us.” 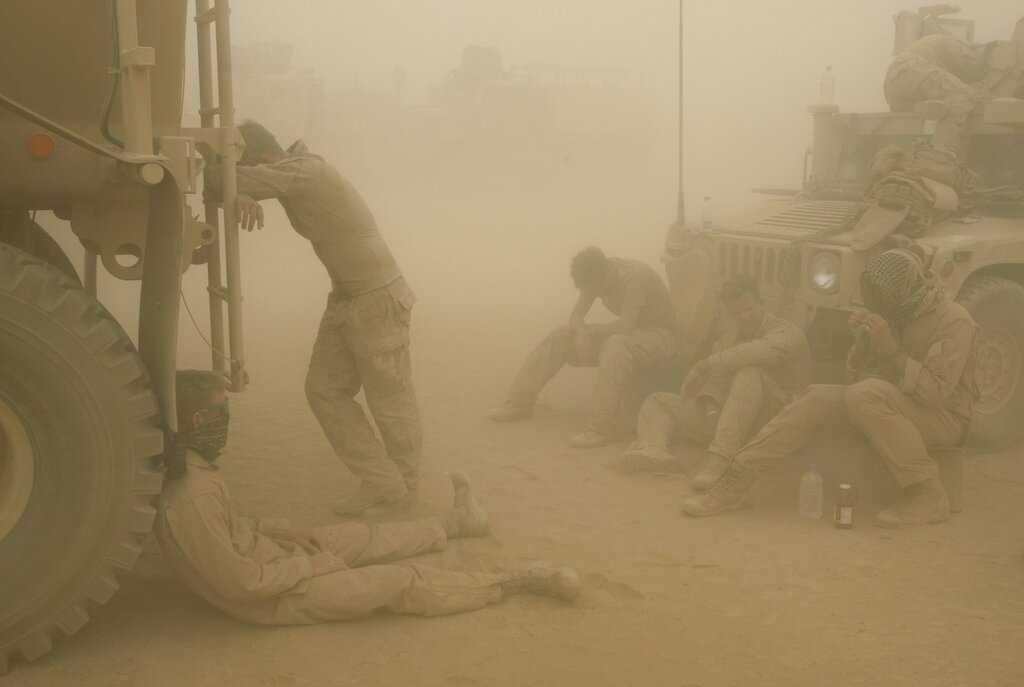 In this Wednesday, May 7, 2008 file photo, U.S. Marines from the 24th Marine Expeditionary Unit try to take shelter from a sand storm at forward operating base Dwyer in the Helmand province of southern Afghanistan. (Photo: AP)

Hamid Dabashi, a professor of Iranian Studies and Comparative Literature at Columbia University, said that the Taliban blitzkrieg that dismantled 20 years of neocon and liberal imperialism in Afghanistan also marked an ignoble end to all forms of disguise. “The US accomplished its mission in Afghanistan – it funneled money to its military-industry complex with a 20 year-long occupation,” he said.

Severe civilian casualties in the horrific and unsuccessful wars

“What did Afghans gain after 20 years of US occupation? Did they prosper, did they have a day of peace? What can the Taliban do to Afghanistan that it and the US and their European allies have already not done to it? How many precious Afghans – men, women and children – have been lost to the combined militant thuggery of the US and the Taliban?” Dabashi wrote in an article published on AI Jazeera. In his opinion, the US invasion of Afghanistan was “a calamity for Afghanistan and its people is entirely irrelevant to American military strategists.”

“The war has been long and complex and horrific and unsuccessful... and the war continues in over 80 countries,” said Catherine Lutz, co-director of Costs of War and a professor of international and public affairs at Brown University. The death toll, standing at an estimated 897,000 to 929,000, includes US military members, allied fighters, opposition fighters, civilians, journalists and humanitarian aid workers who were killed as a direct result of war, whether by bombs, bullets or fire. The researchers noted the data does not include the many indirect deaths caused by, for example, disease, displacement, and no access to food or water. 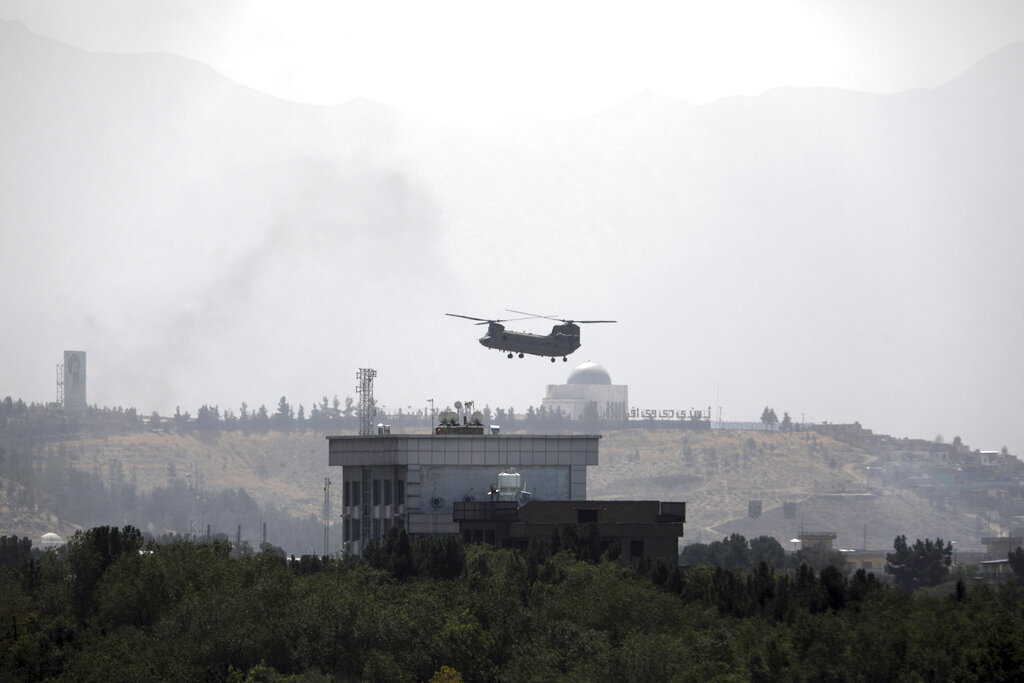 US drone and airstrikes have killed at least 22,000 civilians – and perhaps as many as 48,000 – since the 9/11 terrorist attacks in 2001, according to new analysis published by the civilian harm monitoring group Airwars. Airwars found that the US has declared at least 91,340 strikes across seven major conflict zones. The research concluded that at least 22,679, and potentially as many as 48,308 civilians, have been likely killed by US strikes.

According to Airwars, the seven most intensive US military campaigns fall into three categories:

Airwars said a peak was seen during the invasion of Iraq in 2003, when the US launched 18,695 sorties. The campaign against the so-called Islamic State also saw a sustained peak, with more than 9,000 strikes per year from 2015-2017.

Xinhua said in a commentary that since the end of World War II, the US has caused not only severe civilian casualties, but serious property damage and harrowing humanitarian crises due to a longtime interference in other countries and waging wars overseas.

“The US wars have brought political turmoil, economic stagnation and destitute families in many countries,” Xinhua reported. “The United States itself is also struggling with the massive military spending and health care for veterans”.

Consequence of arrogance and hegemonic policies

Americans and the world are beginning to reflect on its 20-year war on terrorism. Even as Americans grappled with trauma and anger at home, the attacks cleared the way for a foreign policy based on the belief that the US can “transform foreign societies in its own self-image,” said UC Berkeley historian Daniel Sargent. This was “hubris,” Sargent said, with the “consequence of exploding the credibility of America as a superpower.”

In a series of interviews, Berkeley scholars said the shock and the national response set off a cascade of repercussions — misguided and expensive wars in Afghanistan and Iraq, a rise in anti-Muslim hate, and an obsession with security and safety that has undermined freedom and human rights.

“A sense of accelerating imperial decline would bleed into all our domestic arguments, widen our already yawning ideological divides, encourage the feeling of crackup and looming civil war,” he said.

Zalan Khan, founder of the social media forum Qissa Khwani, said the global order has unraveled mostly at the hands of the US. Its moral dimension started to fall apart, when the US invaded Iraq in 2003, not only disregarding the United Nations but also propagating lies about Saddam Hussein’s regime possessing weapons of mass destruction. The credibility of the economic order was in turn damaged by the great recession of 2008, when major US financial institutions collapsed one after another. “Viewing the humiliating withdrawal from Afghanistan within this larger context, one can say that the century of American dominance may well be coming to an end,” said Khan.

Analysts said the US has been pursuing the law of the jungle in the international arena. Since the end of the Cold War, America's strength has grown unprecedentedly dominant and become increasingly arrogant in addressing international affairs. Whenever disputes arise, it often seeks a solution through military means and shows no respect for international order and rules.