The Green New Deal and "Medicare for All" are old news. The hottest position in the Democratic presidential field this week is abolishing the Electoral College. 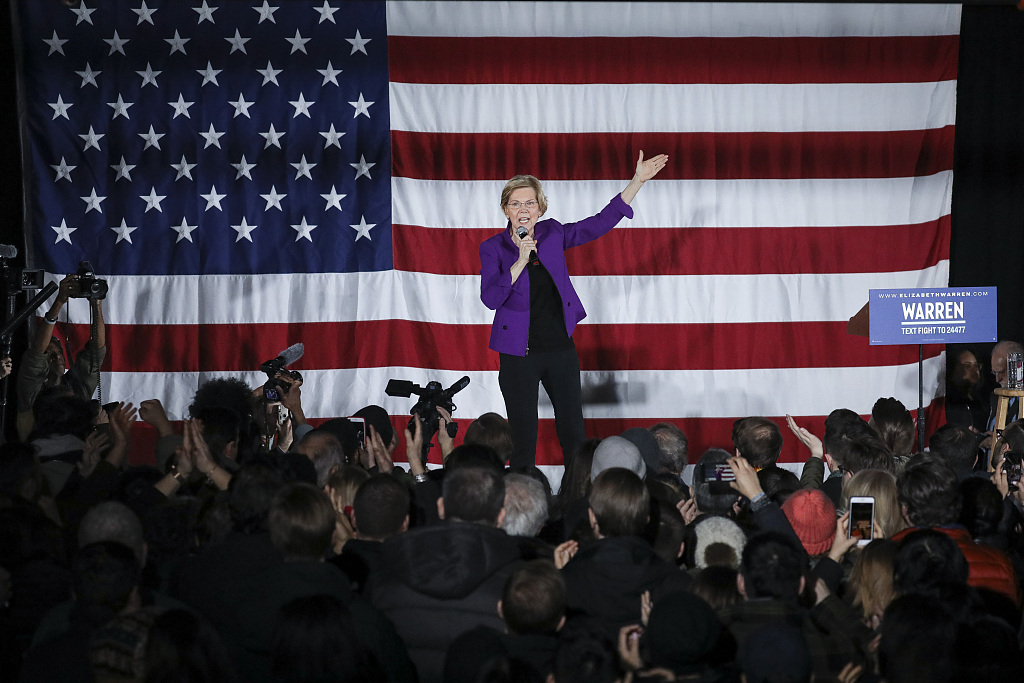 Sen. Elizabeth Warren (D-MA), one of several Democrats running for the party's nomination in the 2020 presidential race, speaks during a campaign event, March 8, 2019 in the Queens borough of New York City. (Photo: VCG)

Elizabeth Warren kicked things off at a CNN town hall Monday night when the Massachusetts senator drew enthusiastic applause by saying: "Every vote matters, and the way we can make that happen is that we can have national voting, and that means get rid of the Electoral College."

The next day, former Texas Rep. Beto O'Rourke said there was "a lot of wisdom" in abolishing the Electoral College. California Sen. Kamala Harris told late night host Jimmy Kimmel on Tuesday night that she's "open to the discussion." Mayor Pete Buttigieg of South Bend, Indiana, tweeted a clip of him saying the Electoral College "has got to go."

It's the latest push by White House hopefuls to embrace a procedural tactic to rally the Democratic base, following similar calls to scrap the filibuster and increase the size of the Supreme Court. The 2020 candidates are tapping into Democratic anger after Donald Trump became the second Republican in five presidential elections to win the presidency through the Electoral College while losing the popular vote.

The Electoral College, a group that comes together every four years to technically elect the president, is enshrined in the Constitution and won't be easy to eliminate. O'Rourke suggested a constitutional amendment to award the presidency to the winner of the popular vote.

Several Democratic-controlled states are pushing for a national popular vote. But rather than pass a constitutional amendment, these legislatures are joining the National Popular Vote Interstate Compact, a group of states that pledge to give their electoral votes to the winner of the national popular vote.

The compact only goes into effect when it includes states representing 270 electoral votes, the majority needed to win the White House. Colorado Gov. Jared Polis brought the current total to 181 when he signed a bill last week to join the compact, and the Democratic governors of Delaware and New Mexico also have bills on their desk.

Still, with legislative sessions winding down, there are no other states expected to join this year.

Warren endorsed the compact after her town hall. Patrick Rosenstiel of the group pushing the idea said in an interview that converting to a national popular vote is not a partisan issue.

"The way to do it is through state action and we would welcome Sen. Warren, President Trump, anyone who believes" in the popular vote, said Rosenstiel, a self-described "lifelong conservative Republican" who grew tired of his vote not factoring into presidential elections in reliably Democratic Minnesota.

Though the Electoral College favored Trump in 2016, and some analysts predict it could give him an edge in 2020, it is not necessarily a pro-GOP institution. During Barack Obama's presidency, many predicted he may benefit from an Electoral College advantage.

That led to criticism of the institution at the time from some Republicans, notably, Trump himself. "The electoral college is a disaster for democracy," Trump tweeted on the evening of the 2012 election, before it was apparent Obama had also won the national popular vote.

Now that the institution made him president, Trump takes a warmer view. "The Electoral College is actually genius in that it brings all states, including the smaller ones, into play," he tweeted Tuesday.

Critics say the Electoral College focuses attention on a handful of swing states at the expense of candidates campaigning throughout the country.

But defenders say the current system almost always lines up with the popular vote and is part of the way the country's founders wanted to check popular passions and encourages attention to small states that may otherwise get passed over.

Andrew Yang, an entrepreneur running for the party's presidential nomination, tweeted: "The problem with deciding Presidential elections via popular vote is that candidates would naturally campaign in urban areas with big media markets and their policies would follow suit. Better to have proportional electoral college votes in each state so you campaign everywhere."

"It requires a constitutional amendment," Delaney told CNN Wednesday. "I'd much rather focus on things that can get done."