WORLD 2020 to be one of three warmest years on record: UN report

2020 to be one of three warmest years on record: UN report

The year 2020 is on track to be one of the three warmest years on record, and 2011 to 2020 the warmest decade on record with the warmest six years all being since 2015, the World Meteorological Organization (WMO) said on Wednesday. 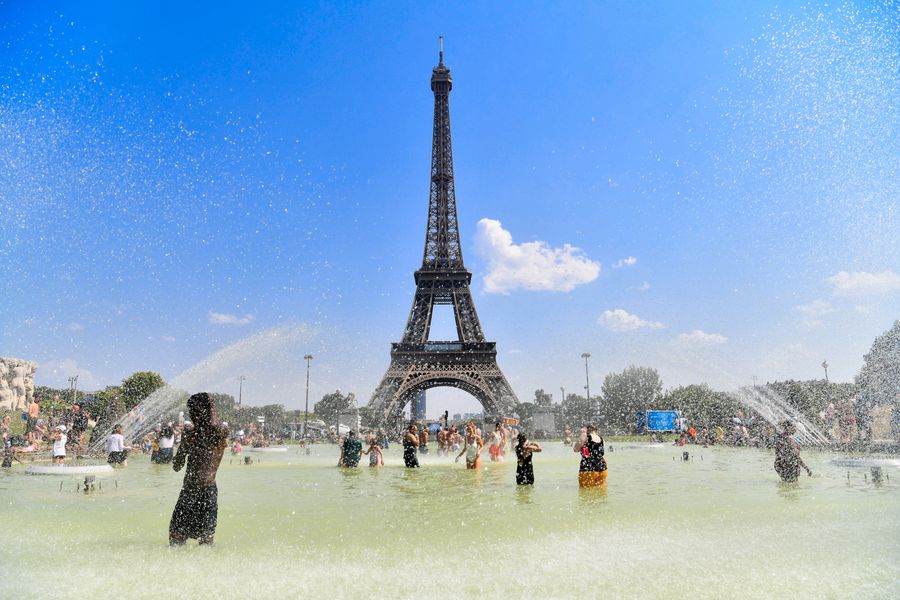 People cool themselves at a fountain near the Eiffel Tower in Paris, France, July 25, 2019. Thursday is the hottest day of the intense heatwave episode in France's northern regions. (Photo by Jack Chan/Xinhua)

According to the provisional WMO report on the State of the Global Climate in 2020, ocean heat is at record levels and more than 80 percent of the global ocean experienced a marine heatwave at some time in 2020. The global mean temperature for January to October 2020 was around 1.2 degrees Celsius above the 1850-1900 baseline, making 2020 very likely one of the three warmest years on record globally.

As with heatwaves on land, extreme heat can affect the near-surface layer of the oceans with a range of consequences, including high impact events such as floods, drought and fires, and tropical cyclones and storms.

About 10 million displacements were recorded during the first half of 2020, largely due to hydro-meteorological hazards and disasters, which were mainly concentrated in South and Southeast Asia and the Horn of Africa.

Even with the COVID-19 lockdown, atmospheric concentrations of greenhouse gases continued to rise, committing the planet to further warming for many generations to come because of the long lifetime of CO2 in the atmosphere, the report said.

COVID-19 has also added another layer of risk to evacuation, recovery and relief operations related to high-impact events.

According to the UN Food and Agriculture Organization (FAO) and World Food Program (WFP), over 50 million people have been hit by both climate-related disasters and COVID-19 in 2020. Countries in Central America are suffering from the triple-impact of hurricanes Eta and Iota, COVID-19 and pre-existing humanitarian crises.

According to the International Monetary Fund, however, the current global recession caused by COVID-19 makes it challenging to enact the policies needed for mitigation, but it also presents opportunities to set the economy on a greener path in order to boost investment in green and resilient public infrastructure.

"2020 has, unfortunately, been yet another extraordinary year for our climate. We saw new extreme temperatures on land, sea and especially in the Arctic ... We saw a record number of hurricanes in the Atlantic ... Flooding in parts of Africa and Southeast Asia led to massive population displacement and undermined food security for millions," said WMO Secretary-General Petteri Taalas.

"This year is the fifth anniversary of the Paris Agreement on Climate Change. We welcome all the recent commitments by governments to reduce greenhouse gas emissions because we are currently not on track and more efforts are needed," Taalas added.