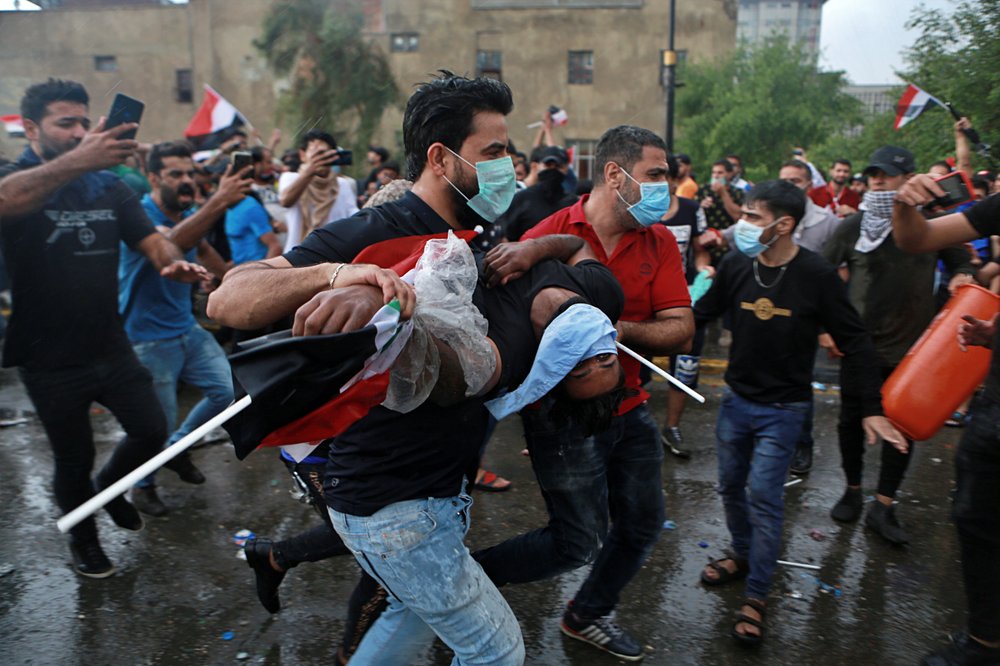 An injured protestor is rushed to a hospital during a demonstration in central Baghdad, Iraq, Friday, Oct. 25, 2019. (Photo: AP)

BAGHDAD, Oct. 25 (Xinhua) -- The Iraqi authorities said on Friday that the casualty toll from the new waves of nationwide protests over unemployment, corruption and lack of public services has risen to 24 dead and more than 2,000 wounded.

According to a statement by the Iraqi Independent High Commission for Human Rights (IHCHR), the 24 protesters were killed by either tear gas suffocation or live bullets used by the guards protecting the headquarters of the provincial governments and the offices of the political parties.

Eight protesters killed in the capital Baghdad, six in Maysan Province, six in Dhi Qar Province and four in the provinces of Basra and Muthanna, the parliament-affiliated commission said.

The number of the wounded has risen to 2,047, including both the demonstrators and security forces, mostly in Baghdad.

"Most of the casualties occurred as a result of gunshot wounds, tear gas and rubber bullets," the statement said.

Since the early hours of Friday, hundreds of protesters rallied in the square on the eastern side of the Tigris River and tried to cross the nearby al-Jumhouriyah Bridge to reach the Green Zone, the administrative center of the Iraqi government.

The repeated attempts to cross the bridge pushed the security forces to completely close it with three-meter high concrete blocks.

According to an earlier IHCHR statement, demonstrators in Wasit Province burned the Islamic Dawa Party headquarters and stormed the house of the governor in the province, while in the southern province of Dhi Qar, protesters burned the provincial government building.

Meanwhile, the media office affiliated with the Iraqi Joint Operation Command said in a statement that the intelligence forces captured a person in Sadoun Street in downtown Baghdad for holding a pistol and shooting both protesters and security forces.

Moreover, the state-run Iraqiya television reported that demonstrators captured another person, who fired bullets at the security forces in Tahrir Square in downtown Baghdad.

The demonstrations came after Iraqi Prime Minister Adel Abdul Mahdi delivered a televised speech, in which he warned of chaos if the government resigns, and promised a cabinet reshuffle, more job opportunities and the establishment of a court to prosecute corrupt officials.

Earlier this month, massive protests erupted in Baghdad and other central and southern provinces over similar reasons that left 157 killed, including security forces.