Twenty-five people were taken to hospitals with mostly minor injuries following a series of crashes involving at least two cars and a bus that crashed through a concrete divider on a Los Angeles highway, authorities said.

Five patients were in serious condition following the collisions shortly after 1 p.m. that shut down all lanes on Interstate 405 in the city's San Fernando Valley area, Los Angeles Fire Department spokeswoman Margaret Stewart said. The 20 others were in fair condition with minor injuries. A total of 40 people were evaluated at the scene, she said. 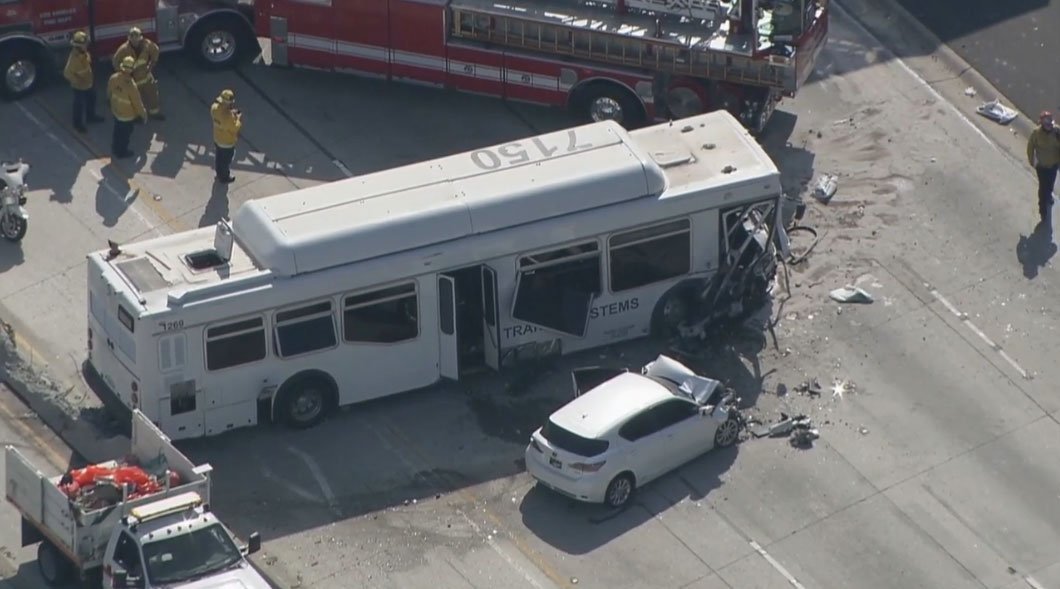 This aerial image made from video provided by KABC-TV shows the wreckage of a bus accident along Interstate 405 in Los Angeles on Sunday, Oct. 14, 2018. Authorities say at least 25 people were injured when the bus crashed into vehicles and through a concrete divider on the highway. (KABC-TV via AP)

The California Highway Patrol was investigating the cause of the pileup on the key north-south artery. It wasn't immediately known how many people were on the bus or where it was headed.

Television news footage showed a white charter bus marked "Transit Systems" splayed sideways but upright across southbound lanes in the North Hills neighborhood. Its skid marks indicated it had gone sideways on the northbound side and then through the divider, City News Service reported.

The bus's front end was crumpled, and emergency window exits were popped open. An SUV next to it had extensive front-end damage.

At least one crashed vehicle was in northbound lanes, which were reopened by about 2:30 p.m. The southbound side remained closed hours later, backing up traffic for miles. Some motorists stuck in their cars walked off the freeway, apparently in search of toilets or drinks, City News Service reported.