WASHINGTON, March 26 (Xinhua) -- As part of efforts to highlight "National Day of Action and Healing" on Friday, 26 U.S. governors released a joint statement condemning violence against Asian Americans which has been on the rise since the outbreak of COVID-19 pandemic a year ago. 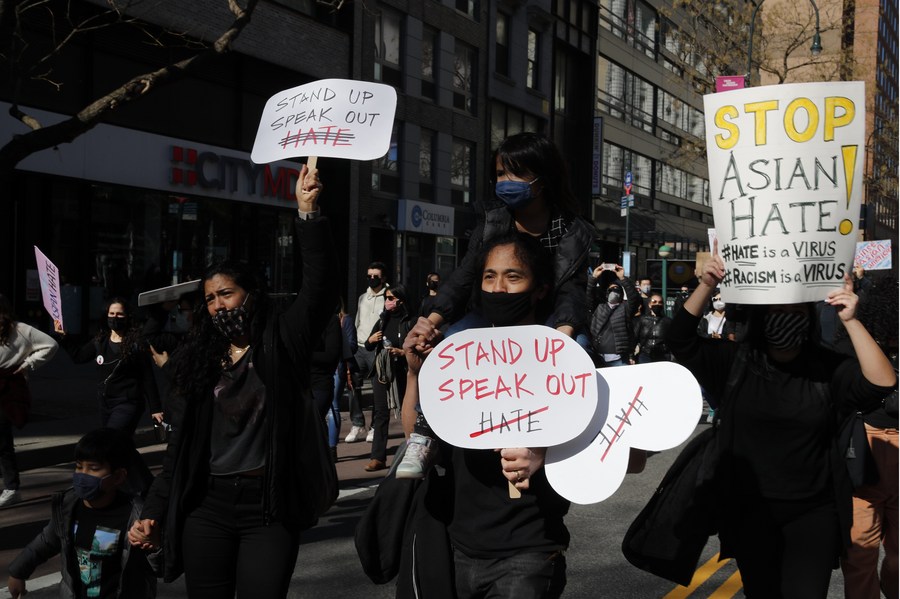 People take part in a protest against Asian hate in New York, the United States, on March 21, 2021. (Photo: Xinhua)

"What is happening to Asian Americans is simply un-American. We condemn racism, violence and hatred against our AAPI (Asian American and Pacific Islander) communities, and we must do more to protect, lift up, and support the Asian American community," said the statement.

The move came in the wake of shootings at three Asian-run spas in Atlanta area in the southern U.S. state of Georgia. Eight people, six of them Asian women, were killed in the shooting.

"The tragic loss of loved ones in Atlanta that left eight people dead, including six Asian Americans, is part of a long and painful litany of acts of hate against Asian Americans across the community," said the statement.

The statement was signed by two Republican governors and their 24 Democratic counterparts including Governor Lourdes Leon Guerrero of the territory of Guam.

According to Stop AAPI Hate, a California-based nonprofit social organization tracking incidents of violence against Asian Americans and Pacific Islanders, it received nearly 3,800 reports of attack or abuse against people of Asian descent between March 2020 to February 2021.