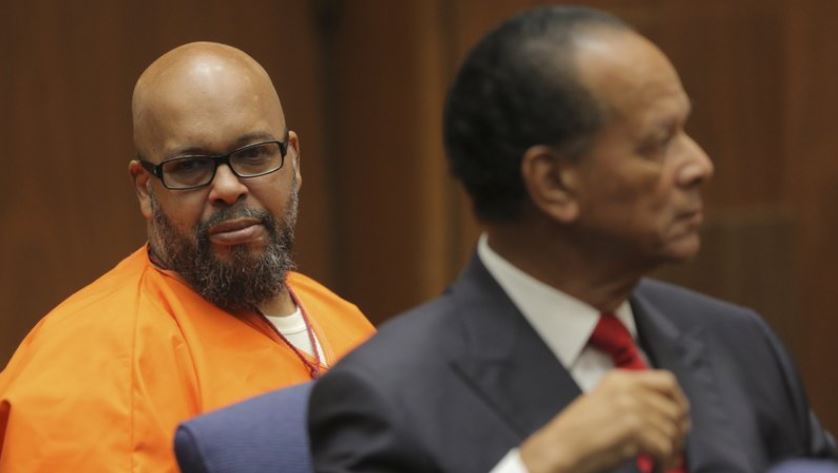 Marion “Suge” Knight, left, and his defense attorney Albert DeBlanc Jr. appear in court in Los Angeles, Thursday, Oct. 4, 2018. A judge sentenced him to 28 years in prison for the 2015 death of man he ran over outside a Compton burger stand. (Photo: David McNew/Pool Photo via AP)

Marion “Suge” Knight was sentenced Thursday to 28 years in prison for mowing down and killing a Compton businessman in a case that completed the former rap music mogul’s downfall from his heyday as one of the biggest — and most feared — names in the music industry.

Knight, 53, will now likely live out most, if not the rest, of his life in a California prison. He showed no emotion in court Thursday as relatives of Terry Carter, the man he killed, described their loved one as a devoted family man and peacemaker.

Carter was killed after Knight and one of his longtime rivals, Cle “Bone” Sloan, started fighting outside a Compton burger stand in January 2015. Knight was upset about his portrayal in an N.W.A. biopic, “Straight Outta Compton,” which Sloan was serving as a consultant on. Knight clipped Sloan with his pickup truck, seriously injuring him, before speeding through the parking lot and running over Carter and fleeing.

While Carter’s relatives said they hoped Knight’s lengthy sentence will bring them peace, many had no kind words for the Death Row Records co-founder, whom they criticized for showing a complete lack of remorse.

“I ask that you sentence this unrepentant, remorseless, cold, callous menace to society to the maximum of 28 years,” she told a judge.

Before Thursday’s hearing, Knight had already agreed to his lengthy prison term by pleading no contest to voluntary manslaughter and avoiding a trial on murder and attempted murder charges that could have resulted in a life sentence if he was convicted. The sentencing ended a nearly four-year court saga that included frequent outbursts by Knight, 53, who also collapsed in court during one appearance and shuffled his defense team 16 times.

Between the restrictions of the three-strikes law and the time Knight has already served, he’ll likely spend roughly 20 years in prison before he’s eligible for parole.

Tupac Shakur became the label’s star artist later in the 90s before he was shot and killed in Las Vegas in 1996, while riding in a car driven by Knight.

Shakur’s death brought on decline for the label, which led to decades of decline for Knight himself.

Many of his associates and rap rivals from the era like Dr. Dre, Snoop Dogg, Ice Cube and Sean “Diddy Combs” went on to become warmly accepted actors, businessmen and media personalities who are now able to do things like host parties in the Hamptons and co-host a cooking show with Martha Stewart.

Knight went in the opposite direction, losing Death Row after it went into bankruptcy in 2006, serving time in prison, and having a knack for being near violence that eventually caught up with him.

Carter’s daughter, Nekaya Carter, said she hopes that the end of the courtroom saga can bring her some peace.

“I wanted justice for my dad and now we’ve finally got it, kind of,” she said. She then addressed Knight directly despite the judge’s instructions not to. “My dad can finally rest in peace while you live out the rest of your life in prison.”

His sister, Jessica Carter, told Los Angeles Superior Court Ronald Coen, “He was so much more than the person the defendant killed with his truck.”

There have been disputed accounts of why Carter had been at the scene, but his family said he often acted as a community mediator and peacemaker.

“This wasn’t no cat who went after nobody,” Carter’s brother-in-law Damu Visha said in court. “He helped people.”

The death was captured on surveillance video, and family members described their anguish in having to see it repeatedly, and chastised the media for showing it so often.

Coen appeared moved by the family’s words and offered his own condolences.

“If it hasn’t been said by anyone else, Coen said, “let me tell you, that my heart goes out to you.”

Most victim’s family members spoke of the need to forgive Knight for their own peace of mind.

“I hope and I pray that we find forgiveness,” Terry Carter’s cousin Patricia Hawkins said. “But it won’t be today.”