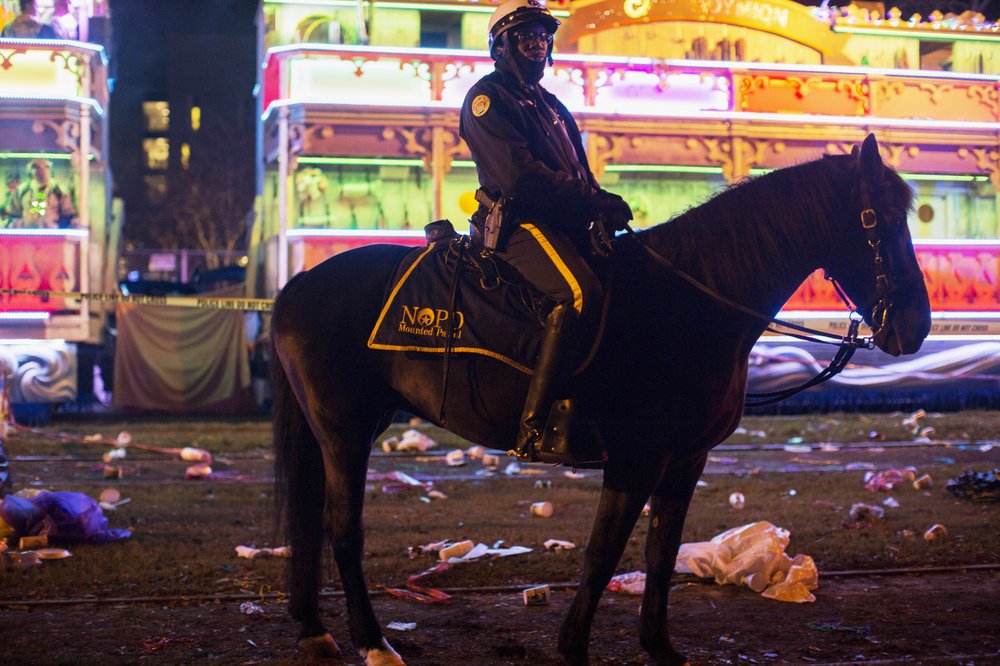 A police officer works the scene where a man was reportedly hit and killed by a float of the Krewe of Endymion parade in the runup to Mardi Gras in New Orleans, Saturday, Feb. 22, 2020. (Photo: AP)

A man was struck and killed by a Mardi Gras float during a raucous Saturday night street parade in New Orleans, becoming the second person in days killed along a parade route during this year’s Carnival season, authorities said.

The man was fatally injured just before 7 p.m. as the popular Krewe of Endymion was rolling, New Orleans police said in a statement. He was pronounced dead at the scene, and the Orleans Parish Coroner’s Office was to release his name and cause of death after completing an autopsy and notifying his family.

The remainder of Endymion’s parade was scrapped Saturday evening. Police said 13 floats had already gone ahead when the accident occurred with the 14th float in the formation. Remaining floats that followed, along with marching groups, were diverted from the accident scene on Canal Street, a wide route popular with parade viewers in the Mississippi River port city.

New Orleans police said first responders swiftly converged on the site, tweeting out calls for crowds to avoid the area.

The float, with its gaudy lights still twinkling, was cordoned off by police on horseback and on foot. All around, streets were strewn with tossed bead necklaces and trinkets thrown from the floats, along with other party debris. A somber mood had taken hold of members of the parade group, TV stations reported.

The fatality came as New Orleans was still mourning the death of a 58-year-old woman who — witnesses said — was run over by a parade float Wednesday night.

“To be confronted with such tragedy a second time at the height of our Carnival celebrations seems an unimaginable burden to bear. The City and the people of New Orleans will come together, we will grieve together, and we will persevere together,” Cantrell said in a statement. “Our hearts break for those lost and for their loved ones, and our prayers and deepest sympathies are with them.”

On Sunday, Cantrell re-emphasized the need for safety precautions and said the issue will be examined in the coming days.

“In the weeks and months ahead, we will be looking at further changes that need to be made to make our routes and our celebrations more safe — but the work starts right now,” she said in a statement.

Wednesday’s fatality had occurred during the parade of the Mystic Krewe of Nyx, an all-female Carnival group. Witnesses said the woman, New Orleans native Geraldine Carmouche, had apparently tried to cross between two parts of a tandem float and tripped over a hitch connecting the sections.

Tandem floats, similar to the one involved in Saturday’s incident, are multiple floats connected together and pulled by one tractor. Tandem floats would not be allowed for the few days remaining in the 2020 festival season, city agency NOLA Ready tweeted. Each float will require its own tractor, The Times-Picayune/The New Orleans Advocate reported NOPD Superintendent Shaun Ferguson said.

The Carnival season is nearing its traditional all-out Fat Tuesday celebration, the raucous climax of a week or more of parades, merrymaking and partying.

The Krewe of Bacchus will split its tandem floats for its Bacchus Sunday evening parade, per the city’s request, the group said in a statement. A statement from the Krewe of Orpheus said it would follow the city’s safety recommendations for its parade Monday.

The deaths also come just a year after a car sped into a bicycle lane near a parade route, hitting nine people and killing two bicyclists not far from where the Krewe of Endymion formation had just passed. A man identified as the driver was subsequently charged with two counts of vehicular homicide.

Before this year, the most recent Carnival float-related fatality in Louisiana happened in 2009, when a 23-year-old rider fell from a float and in front of its wheels in Carencro, about 120 miles (195 kilometers) west of New Orleans.

In 2008, a rider getting off a three-part float after the Krewe of Endymion parade in New Orleans was killed when the float lurched forward and the third section ran over him, police said.