A tank holding a flammable chemical caught fire at a Texas plant Tuesday, killing one worker, critically injuring two others and sending panicked employees fleeing over a fence to safety. 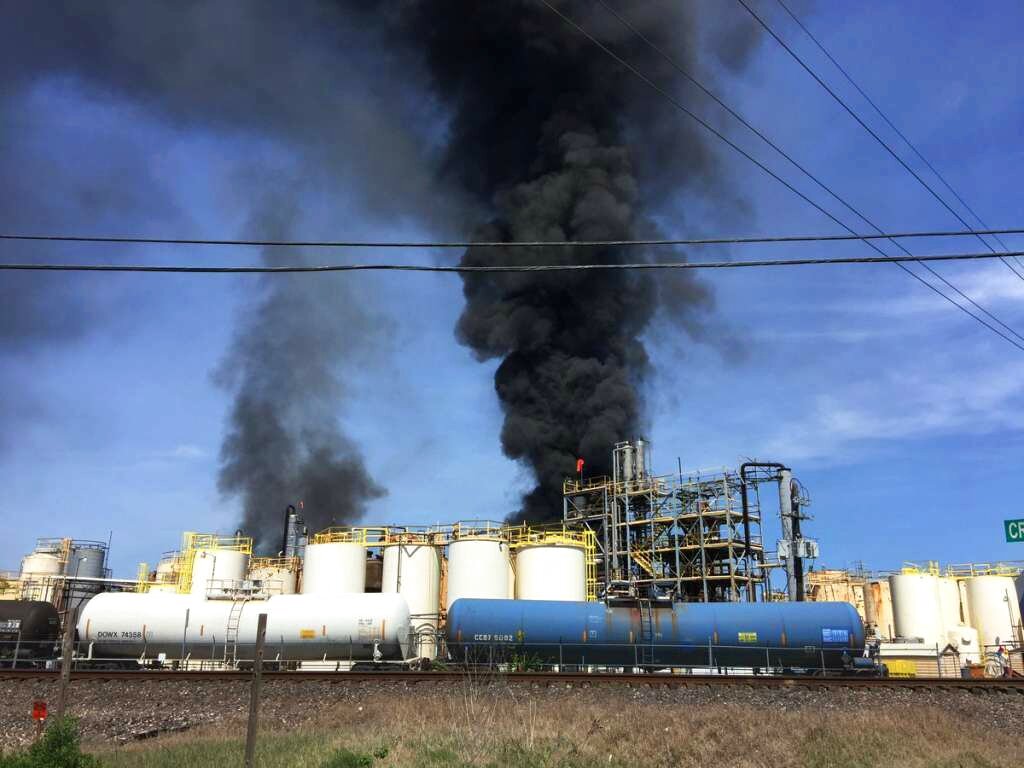 Harris County Sheriff Ed Gonzalez confirmed the fatality in a tweet and said the two injured had been taken by helicopter to a hospital. The two injured were in critical condition, said Rachel Moreno, spokeswoman for the Harris County Fire Marshal's Office.

Authorities shut down a roadway near Tuesday's fire at a KMCO chemical plant in Crosby, about 25 miles (40 kilometers) northeast of Houston, Gonzalez said. Fire crews battled the blaze for about 5 ½ hours before they extinguished it, according to the fire marshal's office.

All residents within a one-mile radius of the plant were ordered to stay indoors or shelter in place for about four hours. It was not immediately known how many residents were affected by the shelter in place. Crosby has about 2,300 residents. The fire sent a large black plume of smoke into the air.

The fire erupted about two weeks after a March 17 blaze at a petrochemical storage facility in Deer Park , located about 20 miles (32 kilometers) south of Crosby. That fire at a facility owned by Intercontinental Terminals Company burned for days and triggered air quality warnings. Crosby also is where an Arkema chemical plant was inundated by water during Hurricane Harvey in 2017. Some chemicals eventually caught fire and partially exploded.

"It is disturbing and it is problematic that we're seeing this incident in a facility, especially on the heels of" the fire in Deer Park, said Harris County Judge Lina Hidalgo, the county's top administrator.

Samantha Galle lives less than a mile away from the plant and said she heard and felt an explosion Tuesday.

"It shook everybody's house around here," the 23-year-old said.

Gonzalez said a transfer line at the KMCO plant ignited in the area of a tank of isobutylene — a flammable colorless gas used in the production of high octane gasoline — which then caught on fire.

The fire spread to a nearby warehouse where dry chemicals are stored.

Moreno said the Environmental Protection Agency has been testing air samples from the area around the plant and has not found any harmful readings.

Worker Justin Trahan told Houston television station KPRC that he heard "some panic on the radio" but no alarms sounding before the plant caught fire.

He said that he and other colleagues had to jump over a fence to escape because all the gates were locked.

Pilar Davis, a product manager with KMCO, said none of the emergency evacuation points at the plant were blocked during the fire.

At a news conference late Tuesday afternoon, John C. Foley, chief executive of KMCO, said a cause of the blaze is still being determined.

"We will conduct a thorough investigation ... and take steps to ensure this doesn't happen again," Foley said.

Davis said the fire initially ignited with isobutylene but was fueled by ethanol and ethyl acrylate. All three are chemicals and solvents used to make fuel additives at the plant.

Davis declined to comment on the worker who was killed and the two who were injured, only saying they were part of KMCO's operations department.

KMCO, which was founded in 1975, is a chemical company that offers coolant and brake fluid products and chemicals for the oilfield industry.

The Texas Commission on Environmental Quality said that it has dispatched emergency response personnel to conduct an initial assessment of the fire.

Foley said his company's number one priority "is safety and compliance."

"We have a long track record of investing in the, people, the systems and the assets to operate safely," he said.

KMCO has had environmental violations in the past, according to a review of records.

In 2016, KMCO's corporate agents pleaded guilty to a federal criminal charge of violating the Clean Air Act. A plea agreement document stated that a plant employee made false entries in logs of air testing of tanks that were known to be leaking chemicals. Another employee then used those falsified logs to submit reports to the federal and state environmental authorities. The document says the violation went on between 2008 and 2012.

A year earlier, the EPA cited KMCO for failing to comply with regulations on its risk-management plan for the plant, but settled with the plant for a $2,700 penalty.

Texas has served the plant with three notices of violation of a federal clean-air law since last August, the EPA website shows.