SEATTLE (AP) — Authorities said Friday that they arrested three suspects in the slayings of two people and shooting of a police officer after a daylong search on a tribal reservation in northeastern Washington.

The Colville Tribes Emergency Services said on Facebook Friday evening that the third suspect was arrested in Elmer City, one of several small communities on the rural reservation. Two others were arrested earlier in the day. 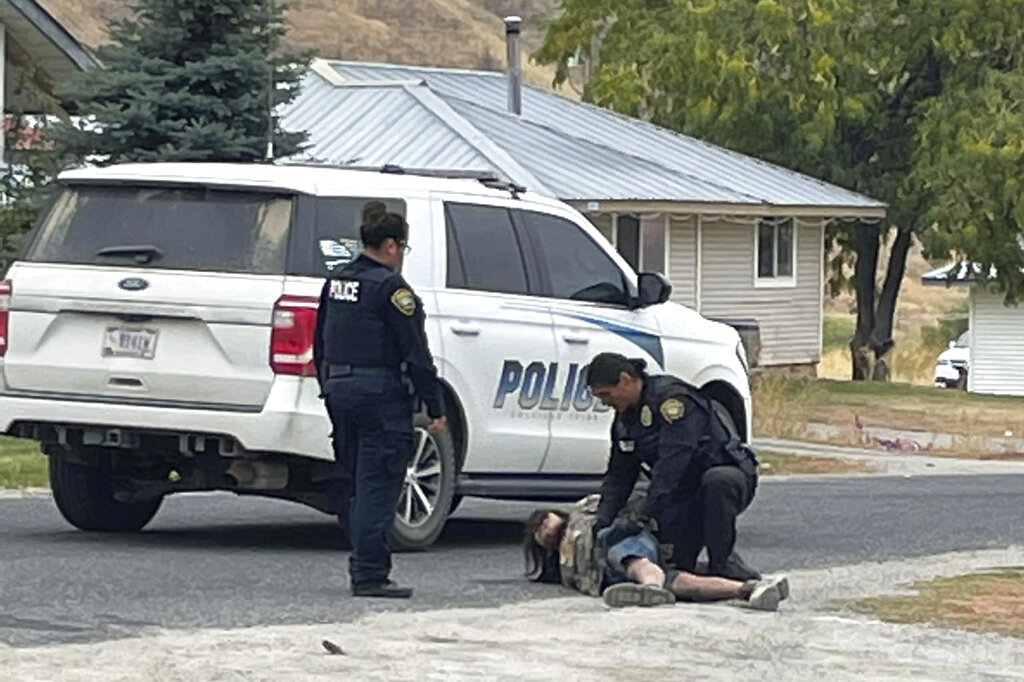 In this image provided by Robin Redstar, a Colville Tribal member and resident of Nespelem, Wash., police arrest a shooting suspect outside her home. (Photo: AP)

The search for the suspects began after the Colville Tribal Police Department responded to a report of a shooting on Thursday in Keller, a small community about 275 miles (450 kilometers) east of Seattle. Officers found two people dead, and an officer who came across a vehicle described as having left the scene was shot in the arm, according to the department. He was doing well after being transported for medical care, the department said in a news release.

Police identified two of the suspects as Curry Pinkham and Zachary Holt. They did not release the name of the third man who was arrested. They also did not release a possible motive for the slayings.

The search spread overnight to the town of Nespelem, a close-knit community about 20 miles (32 kilometers) from Keller, with 10 law enforcement agencies, including the FBI, Washington State Police and Border Patrol, assisting. Authorities urged residents to remain indoors as they looked for the men.

Robin Redstar, a Colville Tribal member and Nespelem resident, said she and other residents waited in their home for hours, and at one point one of the suspects was believed to be in a gully behind her house. Authorities eventually arrested a man in front of her home around 10 a.m. after he tried to enter her neighbor's back door, Redstar said.

Her neighbor, a hunter with guns, was able to detain the man and get him to the street, where a tribal police car was waiting, Redstar said. Two of her neighbor's friends helped get the man to the police car. She said she saw her neighbor with the suspect when she ran out to her truck.

“It was pretty quick. Corbie (the neighbor) was giving him a good speech about morals,” she said.

Authorities didn't release many details, but the Colville Tribal Police announced around noon that two of the suspects had been arrested.

By 4 p.m., the search for the final suspect had spread to Elmer City, with the Colville Tribes Emergency Services saying Pinkham had reportedly been seen in the area and warning residents not to approach him. At about 6 p.m., the agency said Pinkham had been apprehended.

Cody Desautel, executive director of the Confederated Tribes of the Colville Reservation, wrote that schools in Nespelem and Keller were closed Friday because the situation had affected both districts. School was also canceled Friday in another nearby school district, covering the small towns of Wilbur and Creston.

Only about 200 people live in Keller, an unincorporated community that runs alongside the Sanpoil River. The center of town is marked by a post office, a community center and a Catholic church, and small groups of homes are sprinkled along residential streets branching off a rural highway.

The Confederated Tribes of the Colville comprise about 9,400 descendants of a dozen Native American tribes. The reservation covers nearly 2,200 square miles (nearly 5,700 square kilometers) west of Lake Roosevelt, the reservoir formed on the Columbia River behind the Grand Coulee Dam.