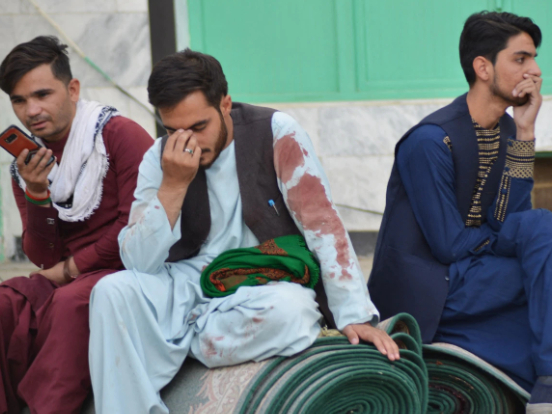 Afghan men sit in a courtyard inside a Shiite mosque in Kandahar on Oct. 15, 2021, after a suicide bomb attack during Friday prayers that killed more than 30 people. (File photo: AFP)

KABUL, Nov. 13 (Xinhua) -- Three suspects have been arrested over Friday's bomb attack on worshippers in Afghanistan's eastern province of Nangarhar, a Taliban spokesman confirmed on Saturday.

"The suspects were arrested hours after the attack. They are under interrogation," spokesman Zabihullah Mujahid wrote on Twitter.

An Improvised Explosive Device placed inside a mosque was detonated during Friday's prayers in the Spin Ghar district of Nangarhar, wounding 15 people, including the prayer leader.

No group has claimed responsibility for the attack so far. The mountainous province has been the scene of bomb attacks claimed by local affiliates of the Islamic State in recent months.