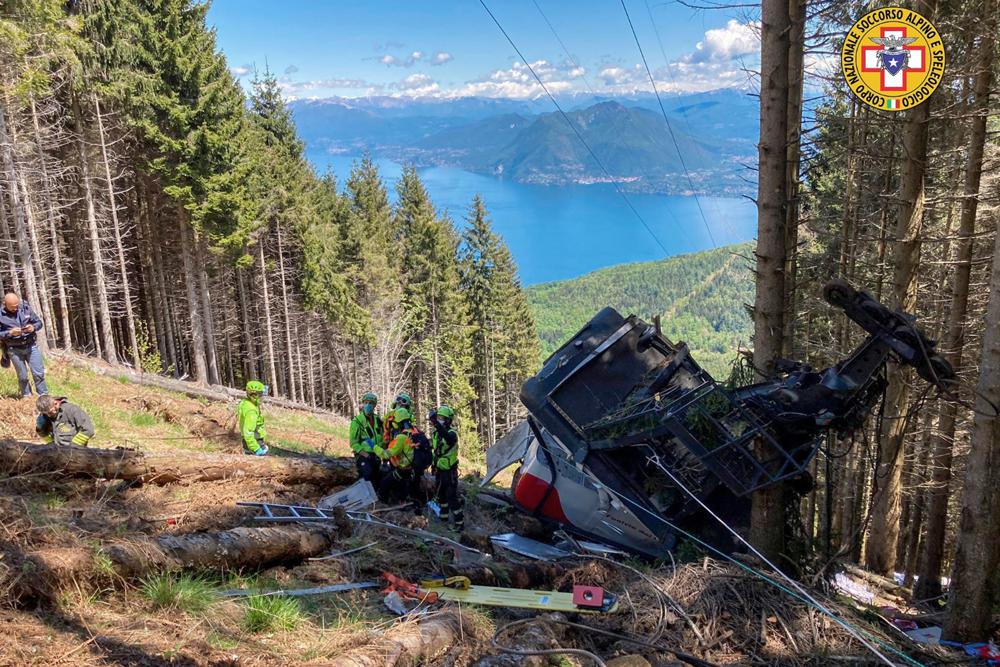 Rescuers work by the wreckage of a cable car after it collapsed near the summit of the Stresa-Mottarone line in the Piedmont region, northern Italy, Sunday, May 23, 2021. (File photo: AP)

Police arrested three people Wednesday in the cable car disaster that killed 14 people in northern Italy, saying workers placed a clamp on the emergency brake to deactivate it as a patchwork repair - one that prevented the brake from engaging when the lead cable snapped.

The revelations, obtained during an overnight police interrogation of the suspects, turned the horror of Sunday’s disaster into outrage, given the tragedy appeared to have been an entirely preventable.

Prosecutor Olimpia Bossi hypothesized that the operators of the sightseeing funicular, which had reopened after a wintertime COVID-19 closure, used the jerry-rigged clamp to avoid having to shut the attraction for the more extensive, “radical” repairs that were necessary.

Bossi said it still wasn’t clear why the lead cable broke or whether it was related to the brake problem. But she said that the intentional deactivation of the brake, done several times over recent weeks for a persistent problem, prevented the brake from doing its job when the cable snapped.

After the lead cable broke Sunday, the cabin reeled back down the line until it hit the pylon and pulled off entirely. It crashed to the ground and rolled over down the mountainside until it came to rest against some trees. Fourteen people were killed; the lone survivor, a 5-year-old boy, remains hospitalized.

Carabinieri Lt. Col. Alberto Cicognani said at least one of the three people questioned overnight admitted to what happened. He said the fork-shaped clamp had been placed on the emergency brake to deactivate it because the brake was engaging spontaneously and preventing the funicular from working.

The cable car line reopened April 26 and was bringing sightseers to the top of the Mottarone peak overlooking Lake Maggiore on the first sunny Sunday since then. The jerry-rigged clamp was still in place on the brake Sunday morning, Cicognani said, citing information gleaned from the suspects themselves.

“Because of a malfunction, the brake was continuing to engage even when it wasn’t supposed to,” Cicognani told Sky TG24. “To prevent the cabin from halting during the transport of passengers, they chose to not remove the dispositive that blocked the emergency brake.”

“In this way, the brake couldn’t function, and this brought about the fact that when the cable broke, the cabin fell backwards,” he said.

Sky and the LaPresse news agency identified the three people arrested as the owner of the cable car service, the company’s director and the service chief.

Bossi, the Verbania prosecutor heading the investigation, said the deactivation of the brake was clearly designed as a stop-gap measure to allow the funicular to continue operating. She told reporters that investigators think it was done with “the full knowledge” of the cable car company’s owners.

The investigation was continuing, but the mayor of the hometown of one of the victims, Serena Cosentino, announced that the city would pursue legal action against those responsible. He said the city of Diamonte, in southern Calabria, would present itself as an injured party in the civil portion of any possible prosecution.

“The news, unfortunately, is showing a broad picture of responsibility and omissive guilt,” Mayor Ernesto Magorno said in a statement.

The developments in the investigation came as doctors at Turin’s Regina Margherita pediatric hospital reported that the lone survivor of the disaster, 5-year-old Eitan Biran, had begun to open his eyes after they gradually brought him out of sedation.

Biran suffered several broken bones in the crash, which killed his parents, younger brother and great-grandparents. An aunt who was not in the cable car is with him at the hospital. The Israeli family had been living in Italy and on Wednesday, members of the area’s Jewish community attended a prayer ceremony for the victims.