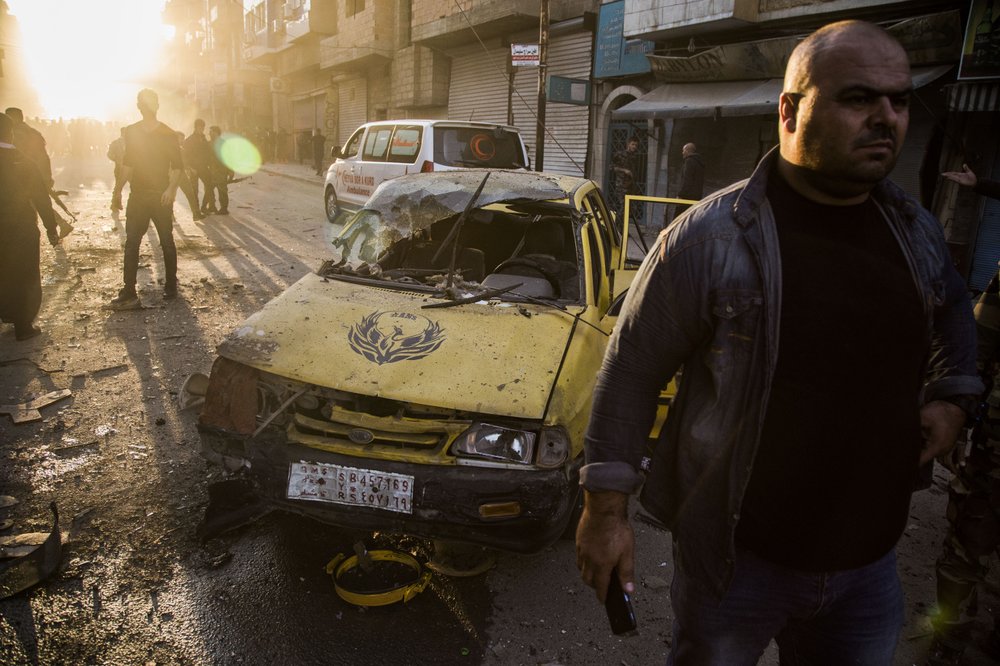 People check the aftermath of a car bomb blast in the city of Qamishli, northern Syria, Monday, Nov. 11, 2019. (Photo: AP)

Three car bombs went off Monday in the northeastern Syrian town of Qamishli near the border with Turkey, killing at least six people, while a priest was shot dead in a nearby area by extremists, state media and activists said.

Northern Syria has been hit by several explosions that have killed and wounded scores of people over the past month. That’s since Turkey began a military operation against Kurdish fighters in the wake of President Donald Trump’s decision to pull out of northeast Syria.

Reports of the explosions gave differing casualty figures, which is not uncommon in the immediate aftermath of this kind of attack.

Syria’s state news agency SANA, which has reporters in Qamishli, said the explosions were triggered by car bombs. It said they killed at least three people and wounded around 20. It said two blasts went off in a commercial street while the third was near a hotel.

The Kurdish news agency Hawar said the blasts killed six people and wounded 21. It said two of the explosions hit a market.

The Britain-based Syrian Observatory for Human Rights, an opposition war monitor, said six people were killed and 22 were wounded in two of the blasts alone.

Elsewhere in northeastern Syria, unknown gunmen shot dead an Armenian Catholic priest and his father as they drove from Qamishli to the city of Hasakeh, according to Hawar and the Observatory.

The Islamic State group claimed responsibility for the killing, saying its fighter shot dead two priests. The IS-linked Aamaq news agency posted a copy of the priest’s identity card with his photo and name on it.

IS had persecuted Christians and displaced tens of thousands of them when it ruled large parts of Iraq and Syria. The extremists lost the last area of land in eastern Syria in March, marking the end of their so-called caliphate.

Christians made up about 10% of Syria’s pre-war population of 23 million, who co-existed with the Muslim majority and enjoyed freedom of worship under Syrian President Bashar Assad’s government. Most have left for Europe over the past 20 years, with their flight significantly gathering speed since the start of the current conflict.

Earlier in the day, Russia Today aired an interview with Assad, who said his forces will soon retake control of the last major rebel stronghold in the country’s northwestern province of Idlib.

Assad said in the interview that they are now giving civilians some time to leave the area, which is dominated by al-Qaida-linked militants.

Syrian troops launched a four-month offensive on the province earlier this year, forcing hundreds of thousands of civilians to flee their homes and capturing the important town of Khan Sheikhoun and several other villages and towns.

A cease-fire stopped the government offensive on Idlib at the end of August but in recent days, opposition activists have reported shelling and airstrikes in the area.