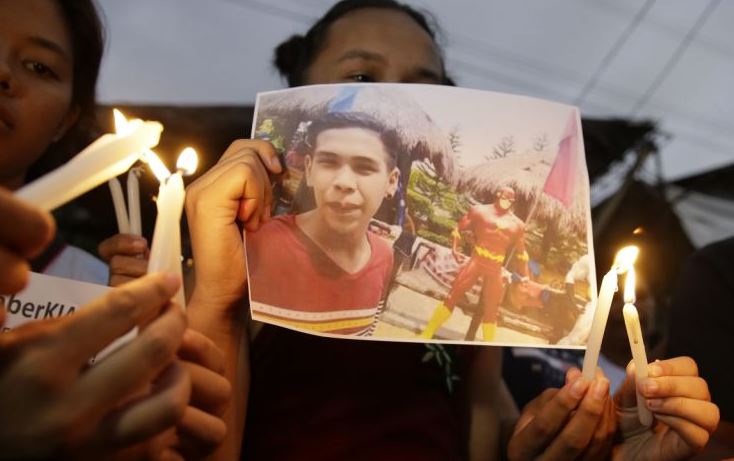 A Philippine court found three police officers guilty on Thursday of killing a student they alleged was a drug dealer, in the first known such conviction under the president’s deadly crackdown on drugs.

The court sentenced the officers, Arnel Oares, Jeremias Pereda and Jerwin Cruz, to be imprisoned for up to 40 years without parole, although they can appeal. Aside from the prison term, the policemen, who appeared in court in handcuffs and yellow detainee shirts, were ordered to pay damages to Santos’s impoverished family.

President Rodrigo Duterte’s crackdown, which has left thousands of suspects dead, reportedly in clashes with the police, has alarmed Western governments and U.N. rights experts and horrified human rights watchdogs. The volatile president has stressed he does not condone extrajudicial killings, although he has repeatedly threatened drug suspects with death and has assured police he would back them up in ways that human rights watchdogs say have encouraged law enforcers to act with impunity.

“A shoot first, think later attitude can never be countenanced in a civilized society. Never has homicide or murder been a function of law enforcement,” Azucena said in his ruling. “The public peace is never predicated on the cost of human life.”

Duterte’s government called the ruling “a triumph of justice” which disproved critics’ assertion that the judiciary was a rubberstamp.

“As we have always stressed, the conduct of the government’s anti-illegal drug campaign is based on accountability. Therefore, we do not — and we will never — tolerate unjustified police violence, brutality or killing,” presidential spokesman and chief legal counsel Salvador Panelo told a news conference.

Opposition Sen. Risa Hontiveros, who has railed against the drug killings, said the court decision proved that extrajudicial killings under Duterte’s crackdown were being committed by rogue members of the national police force.

“This is a light in the darkness,” Hontiveros said in a statement. “Despite the gruesome climate of killing and impunity in the country, this verdict sends the message that there is hope and justice. And we will fight for more light and truth until the darkness cannot overcome them.”

Hontiveros said the numbers of drug killings, which started to rise when Duterte took office in mid-2016 and launched his war against drugs, could not have reached “catastrophic levels if these killings did not have a sinister principle and policy behind them.”

Duterte and police officials have repeatedly stated there was no state policy to kill drug suspects illegally. Duterte faces at least two mass murder complaints before the International Criminal Court, which he said would never acquire jurisdiction over him.

Delos Santos’s killing on Aug. 16, 2017, sparked an outcry and a televised Senate inquiry, and prompted Duterte to temporarily order a small anti-drug agency with only about a thousand men to oversee the campaign against illegal drugs. The crackdown had been previously led by the national police, which Duterte once described as “corrupt to the core.”

The policemen claimed delos Santos was a drug dealer who fired at officers during the raid, but his family and witnesses testified in official investigations that he was shot in a dark alley near a creek as he pleaded for his life.

Witnesses pointed to evidence, including a village security video, which they said showed two of the police officers dragging away the teenager shortly before shots rang out and he was found fatally shot in the head, holding a pistol with his left hand although his parent said he was right-handed. The police officers testified in the Senate that delos Santos was not the man seen being dragged in the video, although several witnesses doubted the police statements.

The court cited witnesses who identified the three officers as the ones who accosted delos Santos at a small family store and dragged him to the end of an alley, where he was shot to death while ducking on the ground and covering his head with his hands.

The victim’s mother, Lorenza delos Santos, said she was elated by the court decision because it cleared the name of her son and family.

“I am very happy because this is the resolution that proves my son is innocent and that he was never involved in drugs,” she told reporters while fighting back tears.