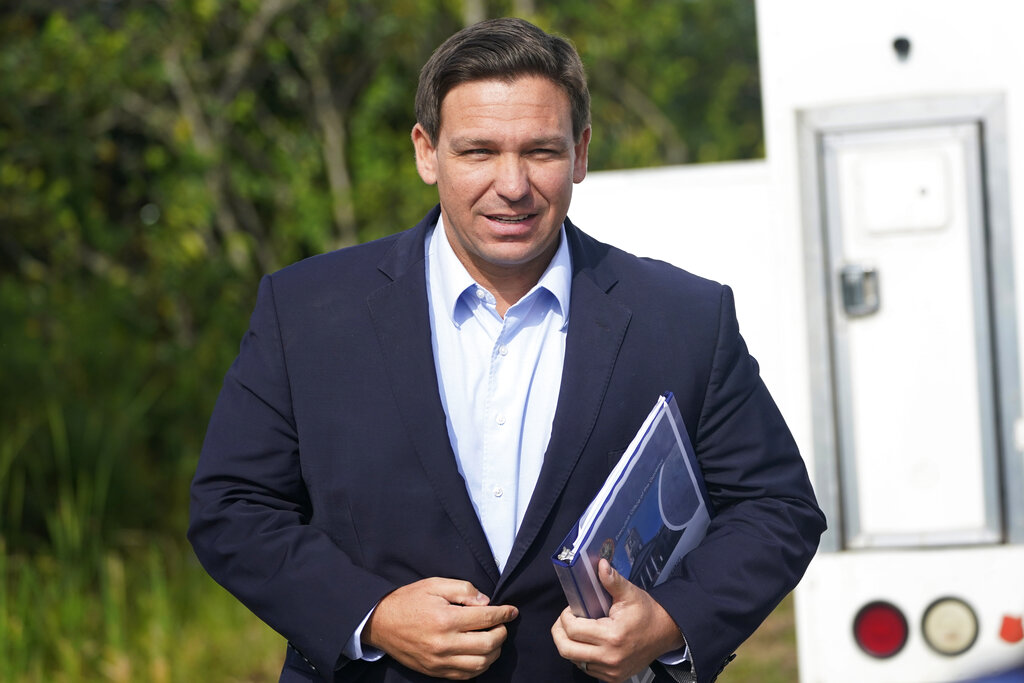 In this Tuesday, Aug. 3, 2021, file photo, Florida Gov. Ron DeSantis arrives at a news conference, near the Shark Valley Visitor Center in Miami. On Sunday, Sept. 12, three Republican presidential prospects, including DeSantis, sharply condemned President Joe Biden's handling of the end of the war in Afghanistan, rebuking the administration's conduct of the U.S. withdrawal as weak and as emboldening its adversaries. (File photo: AP)

Three Republican presidential prospects on Sunday sharply condemned President Joe Biden's handling of the end of the war in Afghanistan, rebuking the administration's conduct of the U.S. withdrawal as weak and as emboldening its adversaries.

The three Republicans, all weighing 2024 campaigns, spoke to more than 1,000 Nebraska party faithful. All praised the U.S. troops who served in the 20-year war prompted by the Sept. 11 terrorist attacks, but the trio did little to rekindle the political unity that defined the days and weeks that followed 9/11.

Cruz repeatedly called the administration's response to the Taliban takeover of Afghanistan as Americans, Westerners and Afghans with U.S. ties scrambled to exit the country "a disaster."

"Every enemy of America is taking the measure of the man in the Oval Office and everyone, everyone of them has determined that the president is weak and ineffective," Cruz said.

Biden and other top U.S. officials expressed surprise last month by the pace of the Taliban's takeover of Afghanistan before the planned U.S. exit deadline of Saturday, Sept. 11. On Aug. 26, roughly 170 Afghans and 13 U.S. service members, including Marine Corps Cpl. Daegan William-Tyeler Page, 23, of Omaha, were killed in a suicide bombing by Islamic extremists at the Kabul airport as people flocked there to flee the country.

"The chaos that followed, and the loss of 13 extraordinary servicemen and women, including a hero from right here in Nebraska, broke my heart because it never had to happen," Pence said.

Pence described an Oval Office meeting in which Trump, discussing U.S. withdrawal plans from Afghanistan with the Taliban in early 2020, threatened military strikes if the Taliban allowed harm to Americans. The Biden administration followed the Kabul airport bombing with airstrikes against Islamic extremists.

The GOP picnic on the grounds of Arbor Lodge State Historic Park along the Missouri River served as an early stage for Republicans with an eye on the 2024 presidential election, even as Trump hinted at a third campaign.

"I know what I'm going to do, but we're not supposed to be talking about it yet," Trump said Saturday, while visiting with New York City police and fire officials, according to The New York Post. "But I think you're going to be happy, let me put it that way."

"I am fighting back against him," DeSantis said, nodding to legal action being discussed by Republican governors. "We are going to be on the front line with a full spectrum response."