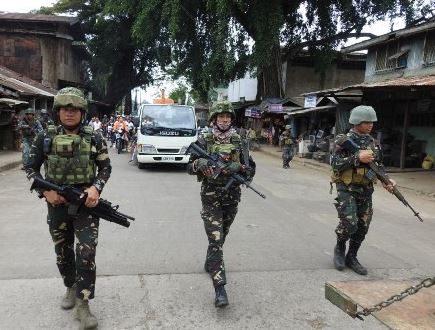 MANILA, Nov. 5 (Xinhua) -- The Philippine military said on Tuesday it foiled plans for a suicide bombing in the southern Philippines after killing three suspected militants, including two "foreign terrorists," in a village near Indanan town in Sulu province.

Lt. Gen. Cirilito Sobejana, commanding general of the Western Mindanao Command of the Armed Forces of the Philippines (AFP), said the suspected suicide bombers "were about to carry out a suicide bombing mission in Jolo town" when they were intercepted and killed shortly before 5:00 p.m. on Tuesday.

Sobejana said the terrorists fired at the troops who tried to stop them at a checkpoint along a road in Indanan town. The troops fired back, resulting in the killing of an Abu Sayyaf fighter and the two unidentified foreign nationals, he added.

"Three suspected individuals aboard a motorcycle were sighted and within the range fired at the troops. An exchange of fire erupted and ended in a running gun battle that lasted for five minutes," Sobejana said.

A military report said, "The foreign terrorists were allegedly the husband and son of the foreign suicide bomber who attacked a military post in Tagbak, a village in Indanan, Sulu on September 8, 2019."

Details of the identity of the two suspected foreign terrorists, a father and son, are scant. Sobejana said they are Egyptian nationals.

Troops recovered from the terrorists a Cal.45 pistol with ammunition, a hand grenade, and two vests with explosives and triggering devices similar to the vest used by the suicide bombers during the two attacks in Tanjung village in Indanan, Sulu on June 28 and on Sept. 8, the report said.

"The hostile plan of the terrorists in Sulu could have caused tremendous casualties and could have tarnished the image of this country if not immediately acted upon by our soldiers," Army Col. Ignatius Patrimonio, commander of 1102nd Army Infantry Brigade, said.

Sulu has been rocked with three suicide bombing attacks this year.

The first incident occurred in January when two alleged suicide bombers blew themselves up inside and outside a cathedral on Jolo island, killing at least 27 people and injuring around 100 more.

In June, another suicide bomb attack occurred when two terrorists on explosives-packed motorcycle blew up a military camp in Indanan town in Sulu that killed seven people, including soldiers.

A "substantial" number of troops, and air and naval assets have been deployed in Sulu over the past months to fight the Abu Sayyaf, a terrorist group which has an estimated 400 fighters responsible for deadly bombings, ransom kidnappings and beheadings in the southern Philippines.

The group, which has been terrorizing the Philippine southern region since the 1990s, preys on foreign tourists, businessmen and fishermen not only from the Philippines but also from Indonesia and Malaysia and hide them in Philippine jungles or remote islands.