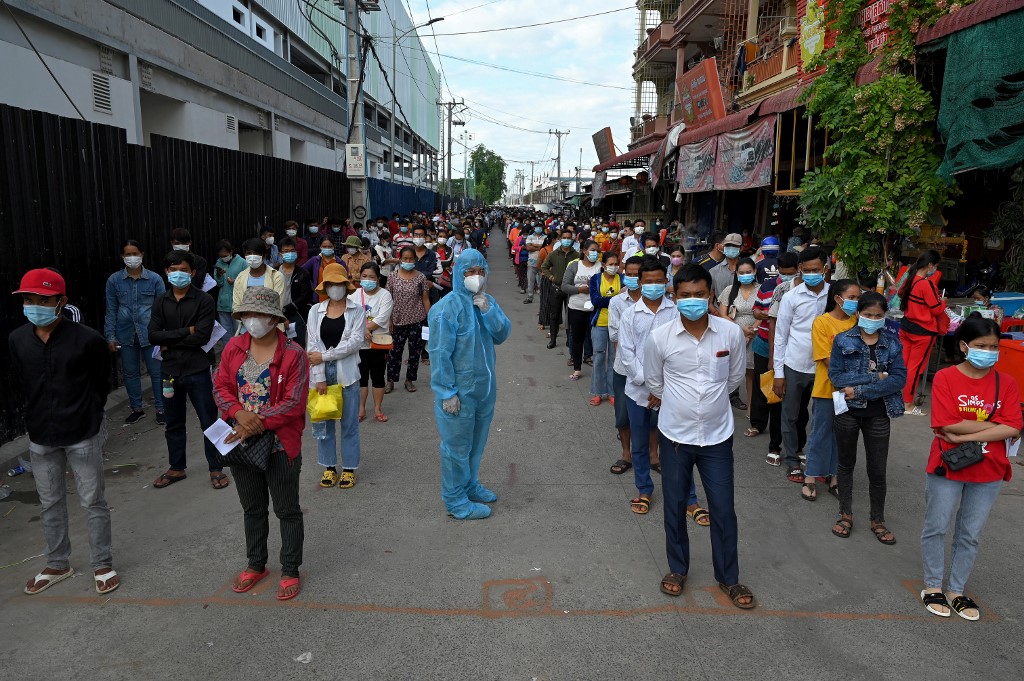 An official in personal protective equipment (PPE) manages the crowd as people queue to receive China's Sinopharm COVID-19 vaccine in Phnom Penh on May 31, 2021, as part of the government's campaign to halt the rising number of cases of the virus. (File photo: AFP)

Su Sam Eoun, a 48-year-old single mother from southern Kandal province, has been awarded 10 million riels (2,500 US dollars) for being the 3,000,000th vaccine recipient, the prime minister said on his social media account late Monday.

"Now, we have vaccinated 3 million people, or 30 percent, of our 10 million targeted adult population. This is a big success," the prime minister said.

Health ministry's secretary of state and spokeswoman Or Vandine said on Tuesday that 2.53 million out of the 3 million vaccine recipients have been fully vaccinated with two doses.

Cambodia began a COVID-19 inoculation drive on Feb. 10 with China being the key vaccine supplier. The kingdom has three vaccines approved for use so far, namely China's Sinopharm and Sinovac and Britain's AstraZeneca.

The country on Tuesday confirmed 495 new COVID-19 cases, pushing the national caseload to 39,464, the health ministry said in a statement.

Thirteen more fatalities had been reported, bringing the death toll to 361, the ministry said, adding that 604 patients recovered, taking the total number of recoveries to 33,571.