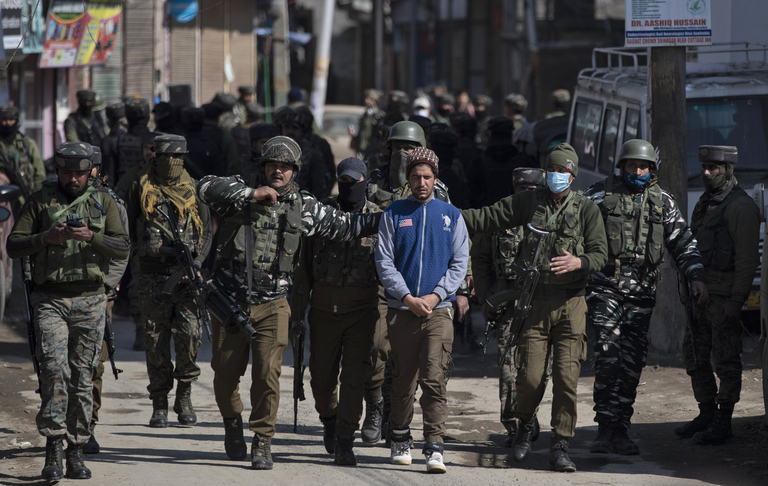 Indian paramilitary soldiers detain a Kashmiri for questioning near the site of a shootout in Srinagar, Indian controlled Kashmir, Friday, Feb. 19, 2021. Photo: AP

In the fresh incident, two policemen were killed after a militant attacked them in Baghat-Barzulla area in Srinagar city, the summer capital of Indian-controlled Kashmir.

"Today a militant fired indiscriminately upon policemen on duty in Baghat-Barzulla area of the city here, wounding two of them," a senior police official said. "Both the policemen were immediately rushed to the hospital. However, they succumbed there owing to their critical condition."

The policemen were fired upon from a point-blank range, CCTV footage of the attack showed.

Following the attack, reinforcements of police and paramilitary were rushed to the spot to trace the attackers.

"The area has been cordoned off and search operation is in progress," the police official said.

So far no arrests were made.

Militants were believed to have managed to escape from the area after carrying out the attack, reports said.

The attack triggered panic in the area and people were seen flee from the spot to prevent themselves from being hit, locals said.

Earlier in the day, a policeman was killed and another wounded in a fierce gunfight in the adjacent Budgam district. According to police, the militants have managed to escape from the village in wounded condition.

In a separate gunfight in the region's Shopian district, three militants were killed in the morning. The government forces have not suffered any damage in the stand-off.

Police officials said government forces cordoned off the villages in Budgam and Shopian on specific intelligence information suggesting the presence of militants in the area.

A guerilla war has been going on between militants and Indian troopers stationed in the region since 1989. Gunfights between the two sides take place intermittently across the region.