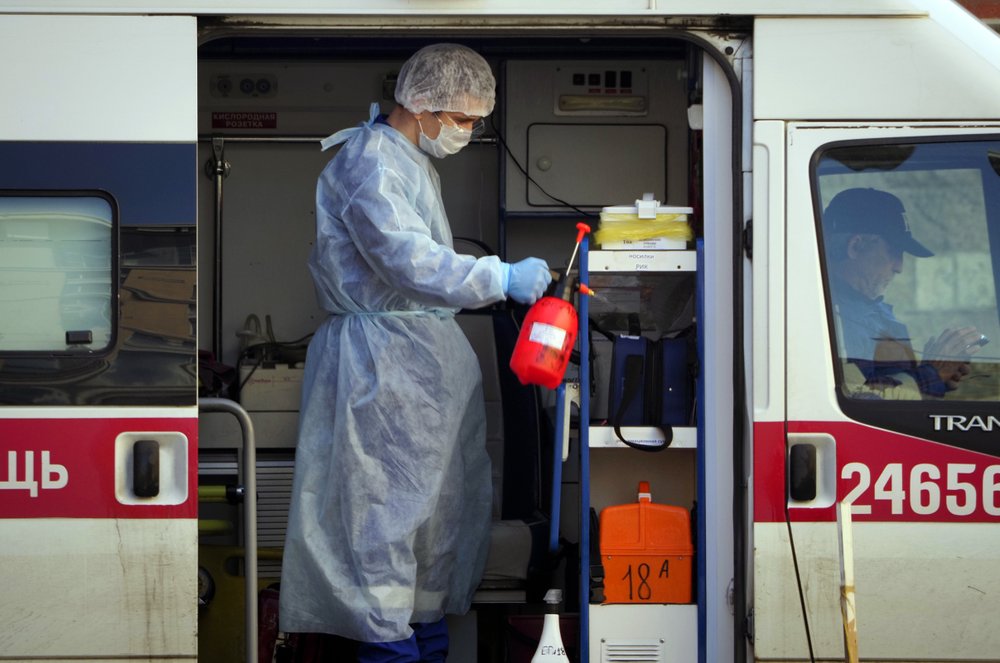 A medical worker wearing protective equipment sprays disinfectant at his ambulance after delivering a patient suspected of being infected with the coronavirus to the Pokrovskaya hospital in St.Petersburg, Russia, Monday, May 4, 2020. (Photo: AP)

Two Russian doctors have died and another was seriously injured in falls from hospital windows after they reportedly came under pressure over working conditions in the coronavirus pandemic.

The exact circumstances of the separate incidents in the last two weeks remain unclear and they are being investigated by police, but they underscore the enormous strains that Russian doctors and nurses have faced during the outbreak.

Reports said two of the doctors had protested their working conditions and the third was being blamed after her colleagues contracted the virus.

Across Russia, doctors have decried shortages of protective equipment and questionable infection control procedures at dozens of hospitals, with many saying they have been threatened with dismissal or even prosecution for going public with their grievances. Hundreds of medical workers also have gotten infected.

Dr. Alexander Shulepov, who works on an ambulance crew in the Voronezh region, 500 kilometers (310 miles) south of Moscow, fell from a second-floor window May 2 at a hospital where he was being treated for COVID-19, breaking several ribs and fracturing his skull.

In a video posted earlier on social media by his colleague, Alexander Kosyakin, both complained about shortages of protective gear. In the video, the 37-year-old Shulepov said he was being forced to finish his shift despite being diagnosed with COVID-19.

But later, local health officials shared another video of Shulepov on social media in which he retracted his earlier complaints, saying he was being emotional.

Kosyakin was accused of spreading false news about the shortages after posting the video and is under investigation. He refused to comment to The Associated Press.

It is unclear what caused Shulepov’s fall. Some local media reports said he slipped while trying to climb from his window for a smoke outside, while others suggested it was due to the pressure for airing his complaints in public.

A doctor died from injuries she sustained in an April 25 fall in the city of Krasnoyarsk in western Siberia. Dr. Yelena Nepomnyashchaya, acting head of a hospital, fell from her fifth-floor office window right after she had a conference call with regional health officials, local media reported, citing anonymous sources.

The reports said Nepomnyashchaya had argued against converting a ward in her hospital for coronavirus patients because of severe shortages of protective equipment and trained personnel, but she failed to sway the officials. Krasnoyarsk health officials denied such a call took place.

Nepomnyashchaya died May 1 in intensive care.

On April 24, Dr. Natalya Levedeva sustained fatal injuries after falling out of a window in a hospital in Moscow, where she was admitted with suspected COVID-19. She ran an ambulance station in Star City, Russia’s spaceflight training facility just outside Moscow, which reported several dozen coronavirus cases in April.

Levedeva died immediately after the fall, which health officials said was an accident. Some media, reports however, suggested she was distraught after being accused of failing to protect her staff from getting infected and had killed herself because of it.

Russia has reported 166,000 infections and 1,537 virus deaths, but health officials in the West have said the country was underreporting its infections and fatalities.

There is no official data on how many Russian health workers have died working on the front lines of the pandemic and Russia’s Health Ministry did not respond to AP’s numerous requests for comment.

Last week, a group of Russian doctors compiled an online Memory List of doctors, nurses and other medical personnel who died during the outbreak. The list currently has 111 names.

Authorities have decided to reopen all industrial plants and construction sites in Moscow starting next week, citing a stable rate of new cases. President Vladimir Putin said Wednesday it will be up to officials in other regions to determine whether to ease lockdown measures that have been in place since the end of March.