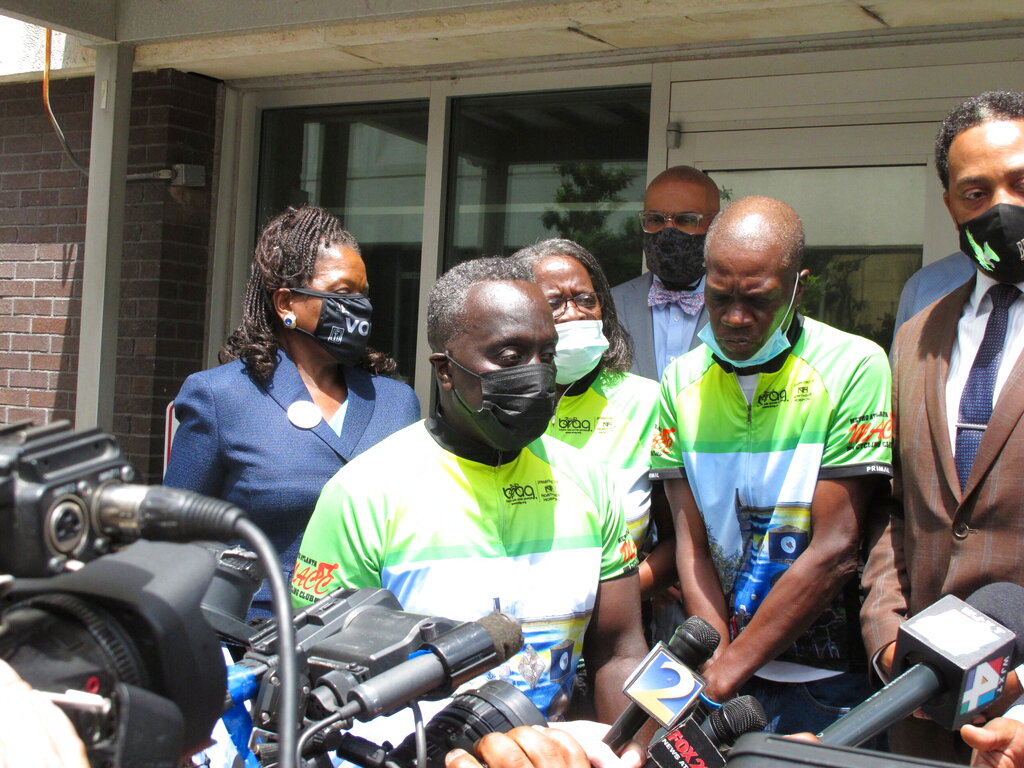 Marcus Arbery Sr., green and white shirt and black mask, speaks with reporters Tuesday, May 11, 2021, following a court hearing for three men charged with federal hate crimes in the slaying of his son, Ahmaud Arbery, outside the federal courthouse in Brunswick, Ga. Justice Department prosecutors say Ahmaud Arbery was targeted because he was Black when he was chased and fatally shot by white men who saw Arbery running in their neighborhood on Feb. 23, 2020. All three defendants pleaded not guilty to hate crime charges before a U.S. magistrate judge. They are also charged with murder in a Georgia state court. (Photo: AP)

WASHINGTON, May 11 (Xinhua) -- Three men on Tuesday pleaded not guilty to federal hate crime charges over the death of Ahmaud Arbery, a 25-year-old African American man who was shot while jogging in U.S. southern state of Georgia last year.

The men were each charged with one count of interference with civil rights and with one count of attempted kidnapping, according to a Justice Department statement released last month. Travis and Gregory McMichael also face charges of using guns to inflict violence.

The indictment alleges that the defendants used force and threats to intimidate and interfere with Arbery's right to use a public street because of his skin color.

Arbery was chased, shot and killed while jogging outside Brunswick on Feb. 23, 2020. No charges had been filed in the case until a cellphone video of the shooting went viral in early May that year, making it a national case.

According to police reports cited by U.S. media, Gregory McMichael, a retired police detective, saw Arbery jogging and thought he was a suspect in a series of break-ins in the neighborhood. He then called his son, and they armed themselves with a handgun and a shotgun, respectively, and chased Arbery in a truck. Bryan saw the McMichaels driving by and joined the pursuit.

Arbery's tragedy fueled widespread outrage over racial inequity in the United States as African Americans suffer a disproportionate share of the negative health and economic outcomes from the coronavirus pandemic.