3 who brought mortar round to gate at Pearl Harbor released 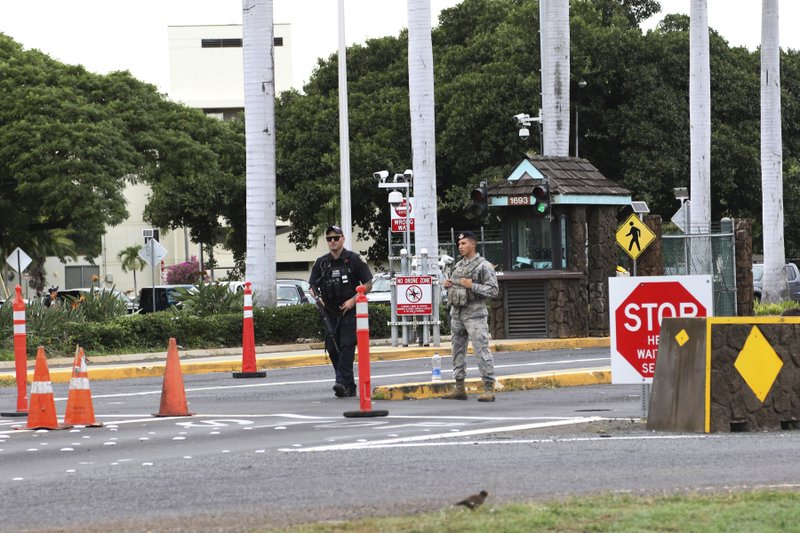 FILE - In this Dec. 4, 2019 file photo security stand outside the main gate at Joint Base Pearl Harbor-Hickam in Hawaii. (Photo: AP)

A mortar round was found in a vehicle at a gate to the sprawling Pearl Harbor military base, shutting down the base for hours and leading three people to be taken into custody, military officials said Wednesday.

It’s not clear what the trio planned to do or where they wanted to go when they were stopped late Tuesday, base spokesman Charles Anthony said, but added, “I don’t think their intention was to get on base.”

A mortar is a portable weapon that is loaded and fired by dropping an exploding shell into a tube. Anthony said there was no explosive material inside the round and no firing device in the car.

It was an “inert training round,” Naval Criminal Investigative Service spokesman Jeff Houston said in an email.

“NCIS does not believe that terrorism played any role in the gate incident yesterday and we don’t believe there is any threat to the community,” he wrote Wednesday.

The vehicle’s occupants were released Wednesday. No information was available about them, and it’s not clear if they will face charges.

Bringing weapons or ordnance onto the base requires coordinating with security, Anthony said.

Hundreds of people, usually lost, end up at the Pearl Harbor gate daily and are turned around if they don’t have proper identification to enter, he said.

“The security guard first noticed the smell of marijuana and then looked inside the vehicle and saw what was potential ordnance,” Anthony said.

Joint Base Pearl Harbor-Hickam was shut down to traffic around 10:30 p.m. Tuesday while a bomb squad investigated the vehicle that appeared at the Nimitz Gate without authorization, the Navy said in a statement.

The base’s gates were closed for about two hours, but no one was allowed through the Nimitz Gate until early Wednesday.

The base is home to a naval shipyard where an active-duty U.S. sailor opened fire on three civilian employees in December, killing two of them. Officials have said the sailor, whose submarine was docked at Pearl Harbor, then took his own life.

The shooting happened days before dignitaries and veterans attended the base’s ceremony to mark the 78th anniversary of the Japanese attack on Pearl Harbor.