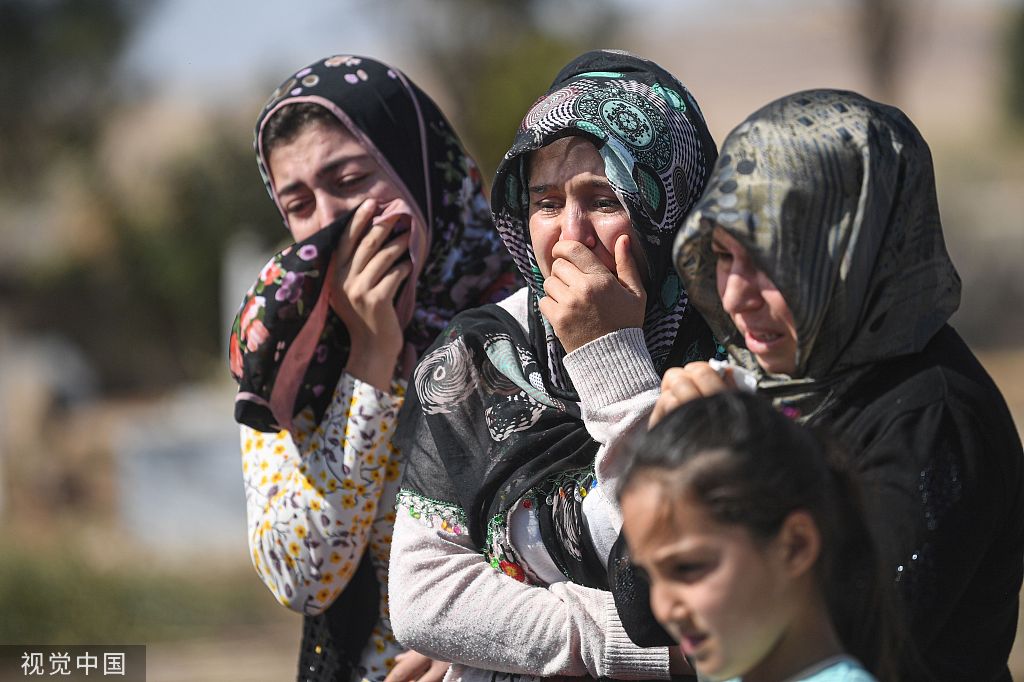 Relatives mourn in front of the grave of Halil Yagmur who were killed in a mortar attack a day earlier in Suruc near northern Syria border, October 12, 2019 . (Photo: VCG)

DAMASCUS - At least 30 civilians have so far been killed in northern Syria since Turkey unleashed a military offensive against the Kurdish militias on Wednesday, a war monitor reported Saturday.

The civilians were killed as a result of the "random" Turkish shelling on several areas in northern Syria, said the Syrian Observatory for Human Rights.

The Britain-based watchdog group said the humanitarian situation is worsening, noting that the Turkish assault could lead to a "humanitarian catastrophe."

Meanwhile, the observatory said that 27 villages have so far fallen to the Turkish forces and their allied Syrian rebels in northern Syria.

It said the 148 fighters of the Kurdish-led Syrian Democratic Forces (SDF) as well as from the Turkey-backed rebels and Turkish soldiers have been killed since Wednesday.

The military campaign of Turkey against the Kurdish forces also led to the displacement of 100,000 civilians, according to the observatory and a recent UN report. Smoke rises from the Syrian town of Tal Abyad, in a picture taken from the Turkish side of the border where a pigeon is seen in Akcakale on Thursday. It was the second day of Turkey's military operation against Kurdish forces. (Photo: Agencies)

For its side, the state news agency SANA said Saturday that the Turkish military campaign has been intensified against Syrian areas in the Hasakah province in northeastern Syria and the northern Raqqa province.

It said that the Turkish forces captured areas after the collapse of the SDF in some parts in northern countryside of Hasakah.

On Wednesday, Turkey started the military campaign in northern Syria to eliminate the Kurdish forces of the Syrian Democratic Forces and its umbrella of the People's Protection Units, which are both deemed by Ankara as separatists and terrorists.

The Turkish operation also aims to create a safe zone in northern Syria and resettle millions of Syrian refugees.

It came after the withdrawal of the US forces from northern Syria, which was seen as a sign of abandoning the Kurdish forces that used to be Washington's allies in fighting the Islamic State in Syria.

The Syrian Foreign Ministry has issued two statements since the beginning of the Turkish operation, accusing the Turkish side of targeting residential areas and causing deaths among civilians.