30-plus years of 'Garfield' comic strips to sell at auction

Cartoonist Jim Davis is offering up more than 11,000 "Garfield" comic strips hand-drawn on paper in an auction that will stretch into the coming years, with at least a couple of strips featuring the always-hungry orange cat with a sardonic sense of humor available weekly. 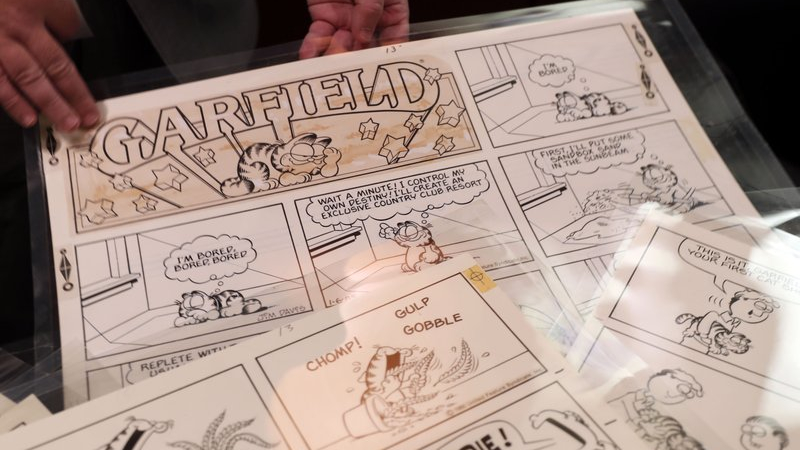 "There are just so many, and it was such a daunting task to figure what to do with them so that they could be out there where people enjoy them too," said Davis, creator of the comic strip that appears in newspapers around the world and has spawned TV shows, movies and books.

Dallas-based Heritage Auctions began offering up the strips in August. The auction house is selling two daily strips each week, along with longer Sunday strips being offered during the large-scale auctions throughout the year.

The strips span from the launch of "Garfield" in 1978 to 2011, when Davis began drawing the strip digitally. He said he still draws it by hand but now it’s with a stylus on a tablet instead of on paper with a pencil, pen and brush.

Comic art collector Nagib Baltagi has purchased about 20 of the strips so far and plans to bid on more. The 36-year-old said the "Garfield" auction particularly resonated because he loved as a kid watching the cartoons and reading the books.

Baltagi, who lives in Miami, said he's drawn to the strips that feature several of the characters and have a storyline that strikes a chord, in addition to ones that ran on meaningful dates.

"I tend to go for the ones that kind of remind me where I was in my life," he said.

Indiana-based Davis said that over the years he gave some strips to family, friends and staff, while others are on displays at museums, including the Smithsonian Institution, and he even tried selling them on his website for a few years. But he kept most of them, he said, storing them in a fireproof, climate-controlled vault.

The auction, he said, "was just a logical thing to do with an awful lot of comic strips and an opportunity to allow not just collectors but a lot of the fans over the years to have access to the strips as well without me having to send them out one at a time."

Brian Wiedman, a comic grader at Heritage, said the daily strips are currently selling on average from around $500 to $700, and the longer Sunday strips are selling for $1,500 to $3,000.

He said the value is often determined by "who is doing what, when and where."

"So Garfield eating lasagna, which is a trademark for him, that would be considered kind of one of the more expensive ones," Wiedman said.

Also adding value, he said, is an appearance by the strip's other characters, which include Garfield's owner Jon Arbuckle and Odie, his dog.

"It's kind of a classic comic you could pick up any day and feel good about," she said.

McGurk, whose museum has about 20 "Garfield" strips, likes the idea of the auction and noted that that the number of paper strips he's auctioning would be a difficult for a library to store.

"I think it's great if he can get that in the hands of fans and people who will love it," McGurk said.

Davis, who is 74, said he has no plans to retire from drawing the comic featuring the orange feline known for his dislike of Mondays and diets.