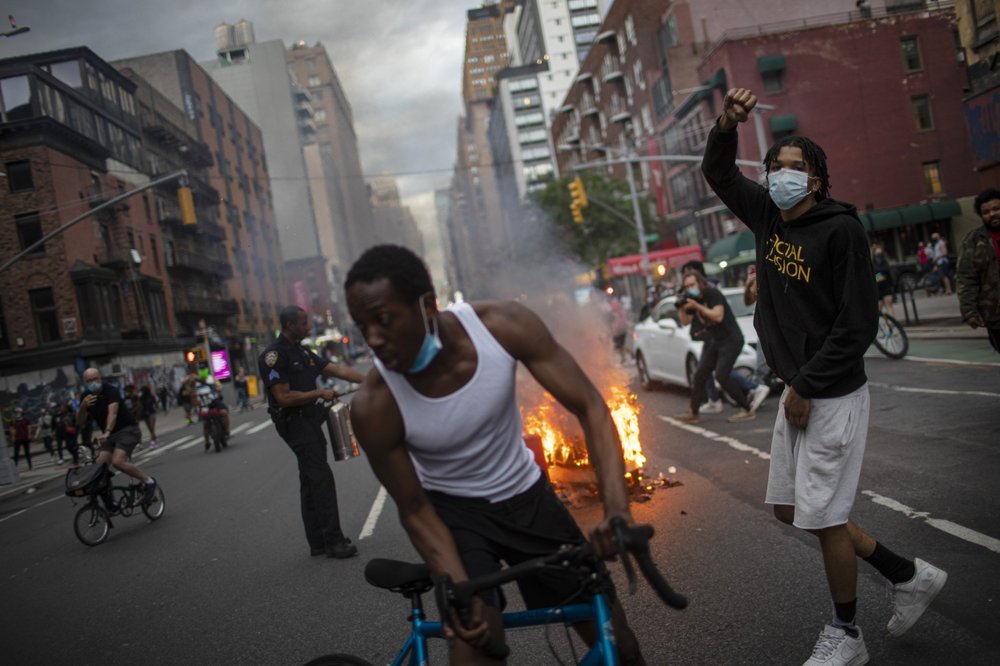 Protesters march down the street as trash burns in the background during a solidarity rally for George Floyd, May 30, 2020, in New York City.  (Photo: AP)

NEW YORK (Xinhua) -- Another 300-plus protesters in New York were arrested Saturday night in the third day of the city's protests over the death of Minnesota man George Floyd, local media reported.

Thousands of New Yorkers assembled in all five boroughs to protest police brutality starting on Saturday afternoon, and the largely peaceful demonstrations turned violent again in the evening with clashes between protesters and police.

Some businesses in downtown Manhattan were broken in and looted. Several police vehicles were burnt and dozens damaged, According to NBC4.

Two police vans in Brooklyn were surrounded and attacked by protesters with bottles and rocks. The vans accelerated to get out of the crowds and knocked several people down on the ground, as videos circulating online showed.

According to NBC4, over 340 arrests were made on the day, bringing the total arrests of the past three days to over 600. Around 33 police officers were injured.

In a remark before midnight in Brooklyn, New York Mayor Bill de Blasio urged all protesters to go home, saying their voices have been heard.

He said a small number of people chose to commit acts of violence and attack police, which is unacceptable.

"Those who are out there to create violence ... we won't tolerate that, you will get arrested tonight."

On Thursday, over 70 protesters were arrested in Manhattan, while over 200 were arrested on Friday night mostly in Brooklyn after violent acts toward police occurred.

Three people have been federally charged with using and attempting to use "Molotov Cocktails" to damage and destroy New York City Police Department vehicles early Saturday morning in Brooklyn, according to a statement of the U.S. Department of Justice on Sunday.