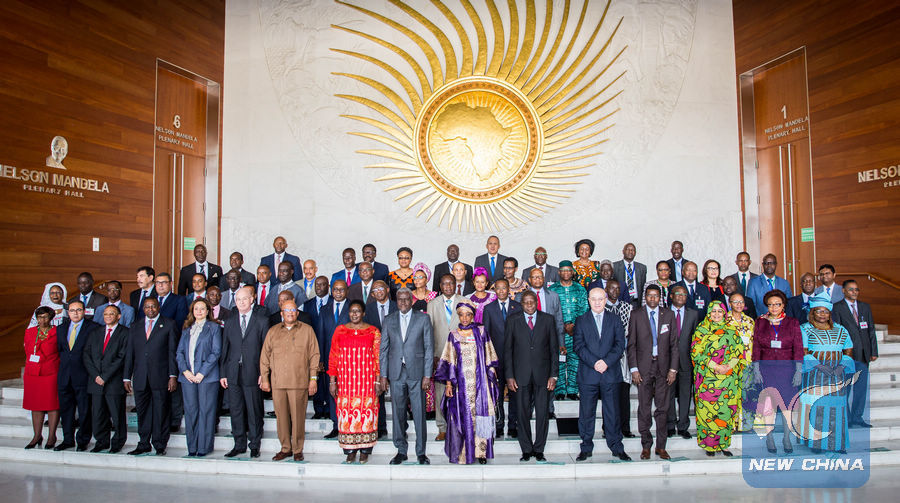 Participants pose for photo after the 35th Ordinary Session of the Permanent Representative Committee (PRC) of the African Union (AU) at the AU Headquarters in Addis Ababa, capital of Ethiopia, Jan. 22, 2018. Photo: Xinhua/Lyu Shuai

Under the framework of the 30th African Union (AU) summit, the 35th ordinary session of the AU Permanent Representatives Committee (PRC) officially opened on Monday at the headquarter of the pan-African bloc in Ethiopia's capital Addis Ababa.

The meeting has brought together the ambassadors of the 55 AU member states based in Addis Ababa and key AU officials, among others.

Under the main theme of the summit, "Winning the Fight against Corruption: A Sustainable Path to Africa's Transformation," the PRC session will consider and deliberate on issues related to agriculture, transport, science and technology, information and communication technology as well as on issues related to legal and financial matters, according to Moussa Faki Mahamat, Chairperson of the AU Commission.

In his opening remarks, Mahamat reiterated that AU member states should play a primary role in the fight against corruption, which the pan-African bloc focuses on the year 2018 and beyond.

"The relevance of the choice of this is obvious because of the scope of the scourge of corruption on the continent with its devastative effects on economic development, corrosion for our social cohesion and destabilizing our political order," he said.

The AU commission would do its best and implement decisions that would be adopted, said the chairperson, adding "the primary responsibility rests upon the shoulder of the member states."

He has also reiterated the importance of the AU reform towards the effectiveness of the union.

"I would like to stress the crucial importance of this reform, its conclusion is a guarantee for an increased effectiveness of our union in order to make it a tool that is likely to carry for our ambitions and translate it into deeds," he said.

"It is the very condition over financial independence which itself guarantees that we take our destiny in our hand and our decision making sovereignty," he said, adding "without this independence Africa is nothing."

The PRC meeting will prepare the agenda of the AU Summit with appropriate recommendations for consideration by the Executive Council, comprising AU foreign ministers, and scheduled to take place from Jan. 25 to 26.

During the opening of the PRC session it was noted that the issue related to US President Donald Trump's recent remarks describing African nations as "shithole countries" would be considered and a declaration would be issued by the AU Commission on the matter.