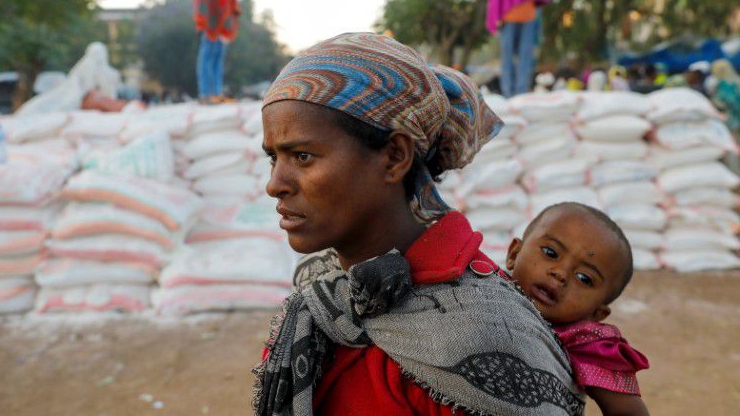 A woman carries her baby while queuing for food at Tsehaye primary school, which was turned into a temporary shelter for people displaced by conflict, in the town of Shire, Tigray region, Ethiopia, March 15, 2021. /Reuters via CGTN

UNICEF Executive Director Henrietta Fore said the fund estimates 56,000 children under the age of five need treatment for severe acute malnutrition, and in parts of Ethiopia's northernmost Tigray region inaccessible to humanitarian workers, the 33,000 children without aid will die.

"These children are among more than 2.2 million in northern Ethiopia who are acutely food insecure, including at least 140,000 in Tigray who are already facing famine-like conditions," Fore said in a statement.

"In the last month alone, we have seen a four-fold increase in weekly admissions of children for treatment of severe acute malnutrition," Fore said.

The region has seen a serious condition of famine after seven months of conflict between government troops and Tigray forces. Humanitarian workers complained for months of the lack of access to help the needy. 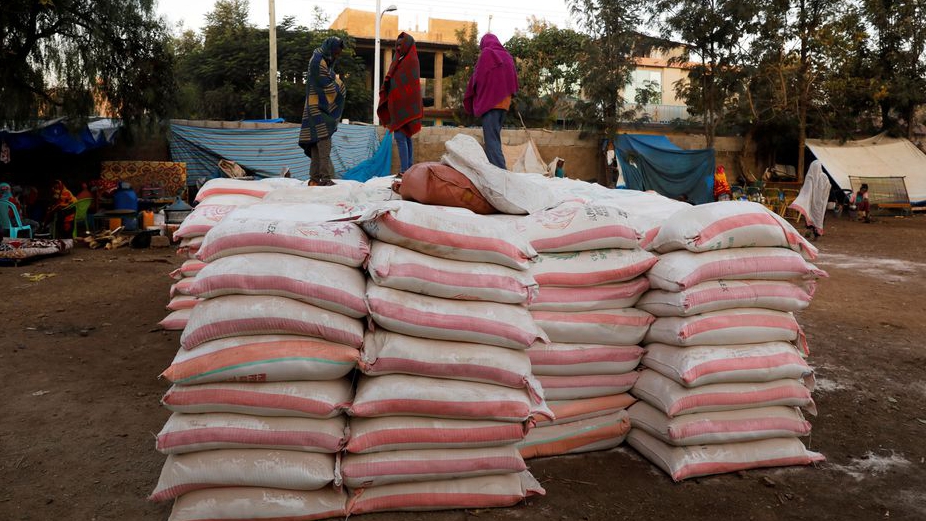 Bags of food donations are seen at the Tsehaye primary school, which was turned into a temporary shelter for people displaced by conflict, in the town of Shire, Tigray region, Ethiopia, March 15, 2021. /Reuters via CGTN

"These developments could lead to outbreaks of disease, putting malnourished children at even greater risk of death," said Fore, adding that "sites hosting displaced children and families are especially vulnerable to disease transmission because of overcrowded and unsanitary conditions."

Fore said the situation could deteriorate further as food insecurity worsens over the coming months and crops cannot be planted.

Last week, it was reported some harvests in Tigray were looted and even set on fire.

"Our aim is to reach every child across the region with critical health, nutrition, water, sanitation, education and protection services," the UNICEF chief said.

"This includes working with our partners so that all severely malnourished children get lifesaving treatment before it is too late," said Fore.

"But, we urgently need strengthened funding support from donors as we expand our critical programs for children over the coming months to reach all those in need," she said.